Dark Horse and TNT team up to for a comic prequel to Falling Skies. The Eagerly anticipated new series starring Noah Wyle, produced by Dreamworks Television and executive producer Steven Spielberg will appear in comic form online and in print.

JULY 22ND, SAN DIEGO, CA–TNT is teaming up with publisher Dark Horse Comics to create a comic book and webcomic prequel toFALLING SKIES, the eagerly anticipated new series starring Noah Wyle(ER, TNT's The Librarian movies) and produced by DreamWorks Television and executive producer Steven Spielberg. The comic book and webcomic are slated to be unveiled at New York Comic Con in October. FALLING SKIES, which is set to premiere on TNT in summer 2011, is a gripping drama that envisions a world where aliens have invaded, and the fate of humanity lies in the hands of a few survivors.

During New York Comic Con (Oct. 8-10), TNT and Dark Horse will distribute an exclusive, special-edition 12-14 page comic book that tells the harrowing backstory of the alien invasion. Beginning Nov. 1, fans will be able to download an extended webcomic version through tnt.tv,darkhorse.com and iTunes, with new installments posted every two weeks. 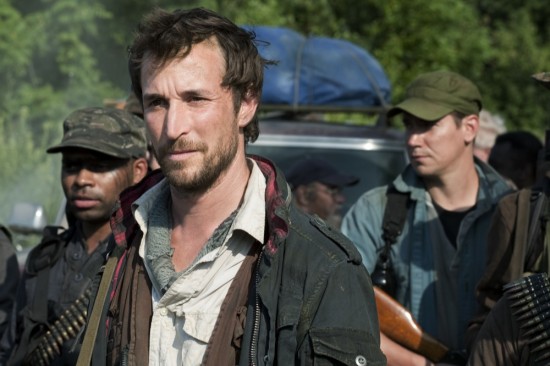 "The FALLING SKIES comic book and webcomic provide a great way for TNT to ramp up excitement for FALLING SKIES, while also providing a thrilling backstory to the series' intriguing premise and characters," said Tricia Melton, senior vice president of entertainment marketing for TNT, TBS and Turner Classic Movies (TCM). "We look forward to working with Dark Horse Comics as we begin the FALLING SKIES invasion."

In addition to the comic book and webcomic, Dark Horse is collaborating with TNT on the FALLING SKIES presence at this month's Comic-Con International in San Diego. The event will include appearances and autograph sessions with series stars Wyle and Moon Bloodgood (Terminator Salvation), along with co-executive producer and writer Mark Verheiden (Heroes, Battlestar Galactica). On Friday, July 23, from 2-3 p.m. (PT), the three will appear at Dark Horse's Comic-Con International booth, where they will sign exclusive FALLING SKIES posters. Then from 4:45 p.m. – 5:45 p.m. (PT), Wyle, Bloodgood and Verheiden will participate in a Q&A panel session in Room 6A.

In FALLING SKIES, Wyle stars as a former college professor who becomes the leader of a group of soldiers and civilians struggling against an occupying alien force. Bloodgood co-stars as Anne Glass, a therapist who works with the surviving children to help them cope with the traumatic situation. The series also stars Drew Roy (Lincoln Heights) as Hal and Maxim Knight (Brothers & Sisters) as Matt, Tom's two sons; and Seychelle Gabriel (Weeds) as Lourdes, an orphaned teenager who helps run the group's commissary. Will Patton (Armageddon, TNT'sInto the West) plays a fierce leader of the resistance.

FALLING SKIES is executive-produced by Steven Spielberg, along with DreamWorks Television heads Justin Falvey and Darryl Frank and screenwriter Robert Rodat. Rodat, who earned an Oscar® nomination for his screenplay for Saving Private Ryan, wrote the pilot from an idea he co-conceived with Spielberg. Verheiden and Greg Beeman (Heroes,Smallville) are co-executive producers. The pilot was directed by Carl Franklin (One False Move, Out of Time).