Fallout 4 to be Announced Soon?

So how many of you out there are Fallout fans? Especially Fallout 3 fans? Was not that a fantastic game, only furthered by five pretty fantastic downloadable content offerings. Fallout 3 was one of my favorite games of this current generation, and while Obsidian took a stab at making their own spin-off in 2010, I can not think of a game I've wanted a full on sequel to more then Fallout 3. 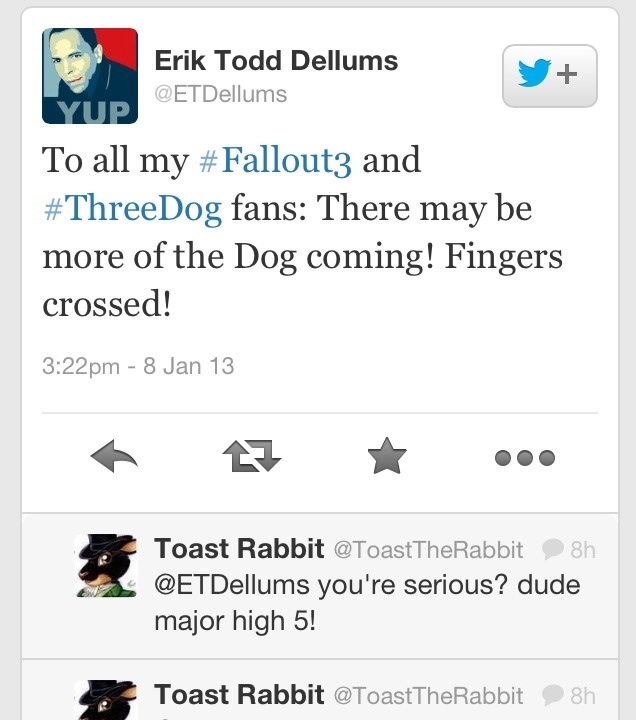 Today, actor Erik Todd Dellums, who voiced the character Three Dog in Fallout 3 tweeted the following: "To all my Fallout 3 and Three Dog fans, there may be more of the Dog coming! Fingers crossed!" While this is not exactly an announcement, it does pose the great question of "are we getting a Fallout 4?" I think it has always been a question about when more then anything else. With Skyrim still getting downloadable content at sometime this year, Bethesda hasn't announced what their next title is. While many have speculated on the next title in The Elder Scrolls proper, I would not be surprised if they are taking a break from Tamriel to bring us another tale in the post-apocalyptic wastes of Fallout. Again, take all this as a grain of salt, but I would not be surprised if we see something at E3 this year, announced for the next gen. Only time will tell.