Fallout Mods You Must Play

After hundreds of hours of roaming the Capital Wasteland in Fallout 3, and the irradiated Mojave of Fallout: New Vegas, I had become a master at building perfectly efficient characters, and knew multiple ways to accomplish every quest.  The endless stretches of the wastelands has lost their wonder.  Fortunately, I wasn’t the only person who felt that I’d done everything there was to do in these games.  There is a massive community of modders out there who’ve spent countless hours adding new missions, features, locations and challenges.  If you choose the best mods out there, and combine them together, both Fallout 3 and New Vegas will offer a whole new world of adventures for even the most footsore wasteland wanderer.

MORE MUSIC
Much of the joy in these games is exploring a vast wasteland, sharing the company of your loyal dog (or cyborg dog), and listening to the radio broadcasts coming from your Pip-Boy 3000.  Still, the developers had a limit to the amount of songs they put in the playlists for Three Dog and Mister New Vegas, so by the fortieth hour or so, you’ve heard Butcher Pete and Johnny Guitar a hundred times each.  Both Fallout 3, and New Vegas have mods that add in an abundance of new songs.

GNR More Where That Came From adds 100 songs to the in-game radio station in Fallout 3.  These were chosen to suit the style and themes of the game, and are interspersed with the regular song list for GNR.  It isn’t a new radio station, rather it augments the number of songs you might hear in Three Dog’s broadcast.

Although you could get More Where That Came From for New Vegas, you’re better off getting another mod by the same fellow who did MWTCF.  It’s called The Secret Stash, and the song list contains all of the songs that are referenced in titles of New Vegas Missions.  Instead of hearing Big Iron and Johnny Guitar every five minutes, you’ll get They Went Thataway and Ring-a-ding-ding along with 78 other thematically appropriate tunes mixed in with the usual selection from Mr. New Vegas. 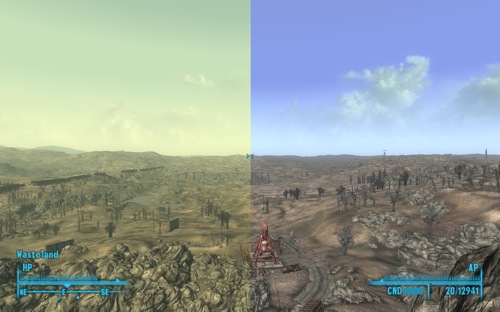 WEATHER
The wasteland is both terrifying and beautiful.  Yet those irradiated clouds and moonlight generally don’t give players much cause to look up.  There are a few weather mods to make that vast sky more interesting, but the most noteworthy is Fellout.

In Fallout 3 the green radio-active haze is replaced by a more realistic sky, and even indoors the lighting is dimmed to help with stealth.  For New Vegas, the same modder addressed the problem with too much light. New Vegas has items and perks for dealing with darkness, but the game never really got all that dark.  Fellout for New Vegas changes that significantly, making the use of Cateye chems and low-light perks much more necessary. You’ll definitely need to use your Pip-Boy’s light to get around after sunset with this mod installed!

MORE BAD GUYS
For Fallout 3, Mart’s Mutant Mod gives every monster in the game a unique appearance and adds some new species of creatures too.  You won’t find yourself fighting identical Super Mutants, or packs of indistinguishable Deathclaws anymore.  Now all of the enemies are distinct, offering unique surprises with each battle.

Mart didn’t re-create his mod for New Vegas, but there is a cool mod for NV that adds some new bad guys to fight.  New Vegas Bounties adds in a new set of bosses for your character to track down and take out, and there is a second installment to it.

MORE SHOOTER, LESS RPG
The Fallout games can be played as shooters - if you build your character right, and get the needed equipment.  Still, they’re really RPGs at heart, and don’t have the sort of bullet timey, grenade-throwy, killstreaky feeling that players have come to expect from a modern shooter.

Fallout Wanderers Edition adds many of these features, along with lots of others to give the game a “less forgiving place” and make it a proper shooter.  Some of the new mechanics introduced in FWE, like the need to eat, drink and sleep were later adopted by Fallout’s official developers for use in New Vegas.  No mod could ask for a greater compliment.

There’s no Wanderer’s Edition for New Vegas as of this writing, but there is a mod called Project Nevada that adds many traditional shooter features to New Vegas.  With this, you’ll have a dedicated grenade button, dynamic crosshairs, a HUD and most of the options players want in a first person shooter.

COMPLETE OVERHAUL
The Fall Out Overhaul Kit or FOOK is one of the most ambitious mods for the Fallout universe, and it’s available for both Fallout 3 and New Vegas.  It adds a significant amount of crafting, along with new locations, graphics, quests and character customization options. New Vegas has it’s own version of FOOK that not only adds in the same features, but actually puts in crafting options to make some of the Fallout 3 items that were left out of New Vegas.

If you’re a hardcore Fallout fan, then these mods will give you an excuse to fire up the games again.  If you’re a fan of Bethesda’s other action RPG, check out our feature on Oblivion mods.  Did we miss your favorite mod?  Tell us about it in the comments below.