Courier's Stash consists of all of the pre-order bonuses that could previously only be obtained by buying the game from specific retailers. For $1.99 you get all four packs, each of which consists of a unique outfit and weapon, along with extra ammo, medical supplies, and miscellaneous aid items. These items are available for all characters on your account, and will appear in your inventory as soon as the code is redeemed, so you can use them to boost an existing character, or provide a massive starting edge to new games. 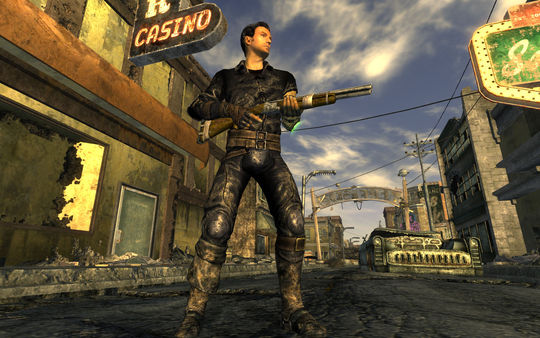 Gun Runners' Arsenal costs $3.99 and adds 27 new weapons (mostly just more power versions of existing weapons), and 40 new mods (primarily for the new weapons in this pack). Fallout: New Vegas is already a game with shoulder-mounted nuclear bomb launchers, and plenty of weapons that amount to one-hit kills, so some fans might say that the last thing New Vegas needs is more powerful items.

Even if you don't need deadlier weapons, there are still some noteworthy items in the Gun Runners' Arsenal, including the return of the Nuka Grenade and standard versions of unique weapons from the main game. There is now a common version of the .556 revolver for repairing That Gun. You will also find new ammo types, including flame rounds for shotguns, along with new perks and challenges.