The modern first person shooter is a tired genre of linear gameplay, identical weapons and stereotypical heroes and villains. As such, developers are always looking to evolve their franchises to differentiate themselves in the crowded world of Call of Duty and Halo. Developers need to push the boundaries in terms of gameplay and story, in an attempt to stay relevant in the land of AAA shooters. Enter Far Cry 3.

If you’re looking for a series that distinguishes itself from the rest with each new entry, look no than Ubisoft’s latest in their long-running, open-world shooter. Far Cry has changed vastly with each entry in the series. The original found players on a tropical island, looking for a missing journalist while trying to avoid genetically altered creatures. The second Far Cry took players to the African savannah, where fires and wildlife were just as deadly as the enemies. For the third game, players have returned to the tropical setting that established Far Cry as a viable franchise. However, a lot has changed in the eight years that separate the original and this new installment.

There are a lot of things you can expect from Far Cry 3 and a lot of them are things you won’t see in other first person shooters. First of all, Far Cry 3 is an open world shooter, allowing you to explore the huge island chain like you would if you were playing Grand Theft Auto. The running and gunning that players will find in other games are all present and accounted for, but the level of exploring is unprecedented when you think of first person shooters.

This level of exploration is also prevalent in Far Cry 3’s story and side missions, which can be completed in nearly every way possible. Something that Far Cry is known for is its non-linear missions. You can load up on firepower and storm the gates, blasting everything that moves, causing as much destruction as possible and still achieve your goal. Conversely, you can take you bow and arrow and Bowie knife, stalk your way past enemies, eliminating them when necessary, and reach your objective without raising as much as an eyebrow from the guards. Choice is a large part of what makes Far Cry 3 different from all other shooters and it’s a very refreshing sight in a genre that holds your hand from checkpoint to checkpoint. 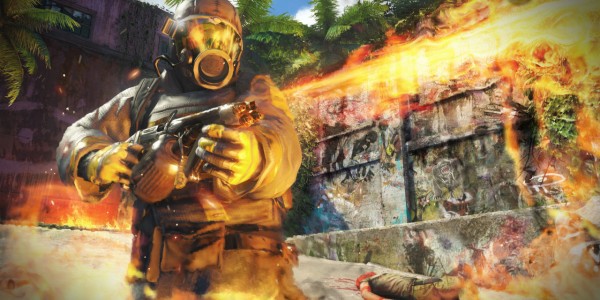 Most first person shooters have always been light on story, opting instead to have players shoot and explode as much as possible. This is the opposite with Far Cry 3, as Ubisoft has gone out of its way to create a meaningful story with characters you’ll root for or against. Insanity has been an active factor in all the marketing of the game so far, as it’s an integral part of the story itself. Far Cry 3 delves deep into the psyche of both its protagonists and antagonists, creating a world that is both unbelievable and grounded in reality. It’s a big step away from other shooters who have the stereotypical, moustache-twirling madmen, bent on the destruction of the world or, more recently, the downfall of America.

Character is an important aspect of any game as they drive the story along and make the player care about their actions and repercussions of those actions. Without memorable characters, players would be mindless drones, moving from one area to another, blasting with no remorse or conscious. The characters of Far Cry 3 are quite memorable. Insanity is a crucial part of the game and that’s definitely apparent in the one of the game’s main antagonists, Vaas. He was first introduced reciting the definition of insanity, which he repeats at the end of his monologue, as if to drive the point home. The fact that characters exist in the world of Far Cry, and they are memorable, is a step above other shooters on the market today.

Vehicles are generally left out of first person shooters or are limited to on-rails sequences. That’s certainly not the case in Far Cry. There are a number of ways players can go from place to place using something other than their legs. Cars, trucks, jet skis and hang gliders all add a level of nuance to a game where choice can drive every decision that a player makes. 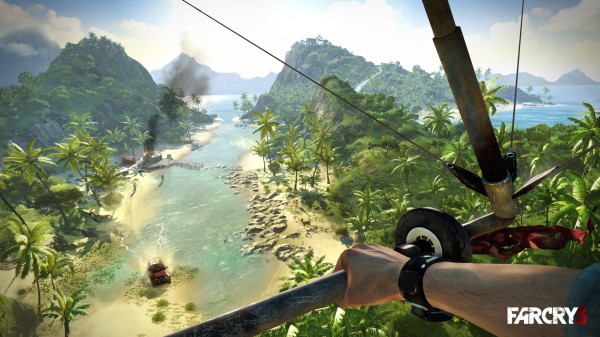 The biggest difference in Far Cry 3 that separates it from the rest of the games out there is the map editor. The past entries in the franchise had robust map editors and a community of players who would spend hours tinkering with level design to create the perfect multiplayer level. Others have taken the map editor to almost Minecraft-like heights, building giant worlds or iconic locations from popular culture. All of it cultivates a community dedicated to creating levels for others to play and it’s a testament to Ubisoft for allowing players to add their own visions of multiplayer levels.

Far Cry 3 does a lot of things that are very similar to all the first person shooters on shelves today. Players can run and gun, throw grenades and melee enemies that get too close. With all the similarities to other modern FPSs, Far Cry 3 also brings a lot of new, refreshing changes to the genre. Each step that Ubisoft has taken to bring Far Cry 3 to new heights is a step in the right direction toward getting current FPSs out of the rut they’ve been stuck in for the past decade. Taking a chance and diverting from the tired-and-true methods is a risk, especially in this industry, but if it pays off then it’ll make Ubisoft look all the wiser for going against the grain. Far Cry 3 hits shelves December 3 for Xbox 360, PS3 and PC.