Far Cry Primal is the new thing that Ubisoft was teasing these past few days. This new Far Cry game is set in the Stone Age. You will play as a member of an ancient tribe and as the trailer shows, there will be big Mammoths, Sabertooth Tigers and other rival tribes to deal with.
You will have to use spears, bows and even your own bare hands to survive. No guns or crazy rocket launchers. This is long before any of that. And I'm actually really excited to play a Far Cry game without guns. My favorite thing to do in Far Cry 3 and 4 was to sneak in to bases and take them down using only my knife and my bow. So a whole game built around not having guns AND it has Mammoths, that sounds (potentially) awesome. 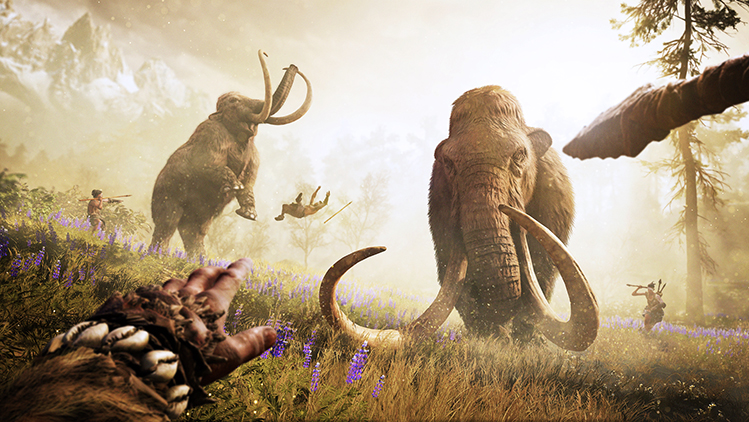 Ubisoft Montreal is developing this new entry in the Far Cry series and they're saying Far Cry Primal is bigger than Far Cry 3 Blood Dragon. Far Cry Primal is a large single-player experience, so Ubisoft says. I wonder if this will end up getting a retail disc release and I wonder what price it will be?
Far Cry Primal will be released on February 23, 2016 for Xbox One and PS4. For some reason the PC version isn't coming out till March 2016. You can watch a behind the scenes trailer that Ubisoft released by clicking here and also read our review of Far Cry 4.