I am still enraptured in the detective story of Fatale.  Despite an artistic downgrade, confusing moments, and a lack in the stories balance, Fatale is a clichéd classic detective story saved by brilliant narration and characterization that keeps it feeling fresh.

Back in the fifties, the manipulative and unfeeling Josephine goes looking for Walter, her lover.  He promised to keep her safe from her violent husband, a crooked cop exposed by Hank as being on the take in an article for his newspaper.  But there is something even more sinister at work than just being on the take…

The story this issue is much easier to follow than the confusing first issue.  But is it still as entertaining?  Definitely – there is great characterization and the storyline still has a ton of mystery but is much easier to follow with the help of narration… until one point in the issue during a conversation between Walter and a strange man known simply as ‘monster.’  This conversation is full of mentions from Brubaker and Phillips’s previous series, which are completely lost on a newbie to their series like me.  But they seem randomly juxtaposed together and could have easily been removed to make the issue more accessible to new readers.  It is still accessible, but this is one moment where readers will be upset with the insistence that they know more about the universe and character Fatale is taking place in – which will ruin the feel of mystery. But the ending of this issue does manage to be successful by omitting mystery in exchange for a tension-filled final moment that will make readers anxious for the next issue.

The only major problem in this story (other than the mind-bending conversation between Walter and the ‘monster’) is the lack of consistency with the last issue.  While the past tense is utilized to remind readers everything happening in the story is from the 50s’, present day never makes an appearance unlike the previous issue, which balanced the two times well.  This could hurt the pacing of future issues if modern times are put on hold.  We also miss out on getting any further characterization on our modern day man who had a lot happen to him in the previous issue.  Instead we’re stuck in ‘Chapter 2’ for this issue, when there could be interludes to the present easily woven into the narrative making for a more dynamic story.

The narration is what brings this installment together.  It gives the comic a classic detective story feel, always speaking in the past tense.  Brubaker manages to avoid making the sentences sound awkward despite this odd tense, with only one exception: “She’d feel the cold tendrils of the universe touch what was left of her heart then.”  The one and only time the past worked against the issue, but only for one panel.

The art done by Sean Phillips is a major step down from the last issue with almost no memorable moments.  Josephine is now laughable rather than sensual physically.  She is no longer drawn seductively and often appears like a Barbie doll.  There is a poor close-up of her face and her teeth are uneven with slight gaps.  This is an especially striking failed attempt at seduction because of how pretty Josephine looks during her scene with Hank’s scene with a close-up of her face giving her more beauty and less Barbie (and hiding her teeth). 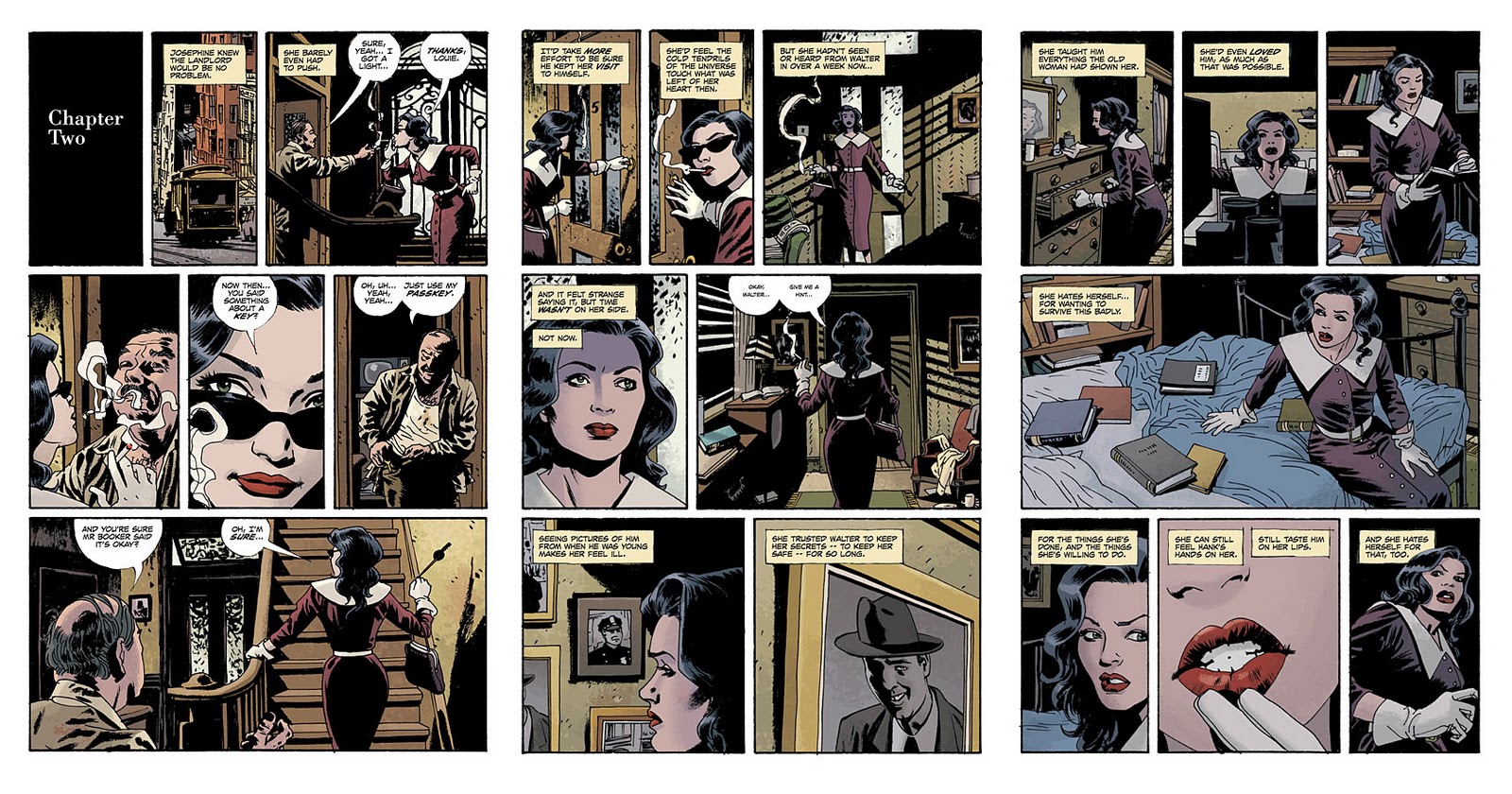 The emotions on people’s faces were consistent until the hysterical attempt at drawing Hank’s face during his and Josephine’s… late night activities.  At first, during sex, he has the most disgusted and uncomfortable look on his face (definitely inconsistent with his current state) and one panel later has the biggest smile on his face in an instant afterglow.

The best artistic moment is a remarkably creepy one that, if used more consistently, would make the issue have a more horrific air.  During that ill-fated conversation between our crooked cop and the ‘monster,’ several effects are used to play-up that latter’s name sake.  The wispy strands of smoke from his cigarette almost look like horns crowning around his head, and a bright red is used to color his eye during one particular scene (that saving grace brought to you by colorist Dave Stewart).  He was the only character who, while earning little characterization with dialogue, made up for it immensely within the context of the artwork.

Because of the narration, Fatale is not your obvious detective story.  It characterizes unique people who you want to learn more about and begins to unravel a story that could get very complex.  Ignoring the sometimes clichéd moments that are not saved by narration and the mostly poor to hysterically bad artwork which has only one spark of brilliance, the issue is a fantastic reader for any fans of dark detective drama.  There is always an air of mystery, but this issue made that air much more clear.  Just not enough to see anything yet.  And I look forward to the next issue when the fog clears a little more.