By: | Comic Reviews | October 21, 2011
The final issue of Marvel's current cross-over event. I realize you may have missed my reviews on the previous six issues of the series. That's probably because I did not read them. Still, I thought, hey, how about coming in right at the end, why not? I think it's fairly obvious that Marvel's latest pull for sales has gone largely unnoticed here at Player Affinity what with being overshadowed by DC's New 52. Well, maybe there's a reason for that.

Like I said, I have not read any of the previous issues, but here is the recap, as I understand it: Red Skull's daughter got power from a big snake who is Thor's uncle and then the snake gave magic hammers to a bunch of other jerks and the prophecy says that Thor will die killing the snake, but the Avengers are fighting the bad guys until that happens because maybe it won't even though it probably will. Caught up? Good. Didn't care to begin with? You're one step ahead of me. Spoilers follow. 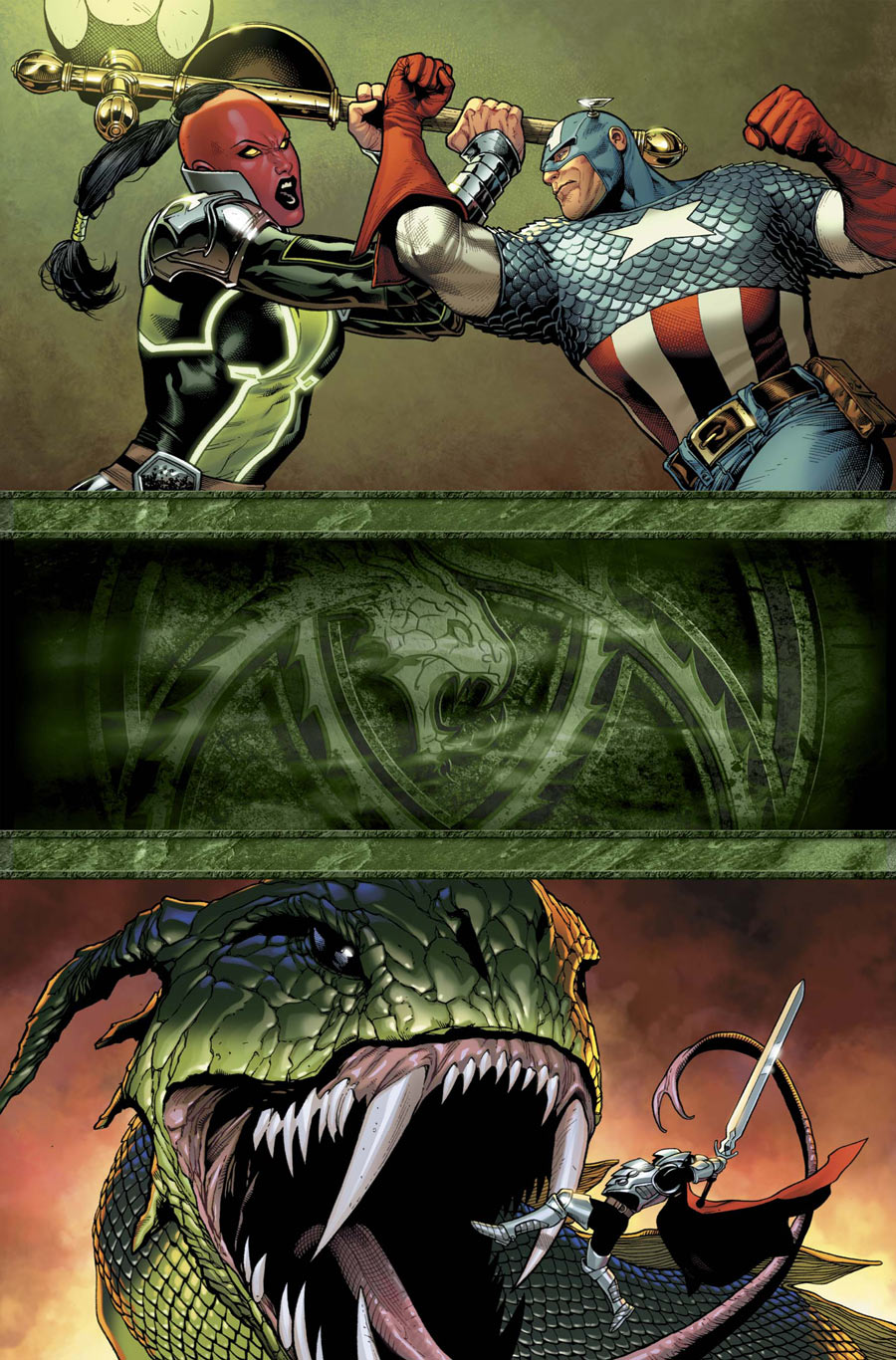 In all honesty, I would like to go into some of the specifics of what happens, but I kind of just summarized it already. Captain America starts out holding the bad guys off, then the other Avengers show up with magical Norse weapons, the bad guys fight the good guys, and then Thor dies killing the snake. I guess there was supposed to be some added tension because Odin was prepared to raze the world to kill the snake so Thor wouldn't die, but that didn't happen, which makes the entire plot point more or less useless. Nothing really happens in these pages. It's just a big battle without a whole lot of interesting dialogue. I often find these huge epic clashes fall a little flat and this is absolutely the case here. Very rarely do I see authors taking advantage of all these different characters fighting together and using their abilities in unison. Typically I just see a page that looks like the battle take out of a solo issue and then inserted into another book, making a big collage of style over substance. Honestly, it's boring.

Then the battle is over and we have the obligatory overseeing of the aftermath. Cap's shield has a crack now. Bucky is dead again, so he probably won't be Captain America anymore. Thor is dead and a bunch of Asgardians seem maybe locked out of Asgard; not one hundred percent sure on what I was supposed to get there. All of the heroes are left to rebuild everything that was destroyed, which I think will make for some great Extreme Home Makeover style issues with Spider-Man and Iron Fist using their carpentry skills. Unless, of course, everything is put back together outside the comics because it is boring and having a fictional character remark on building fictional buildings is entirely pointless.

But the fun isn't over yet, folks, because now it is time for the "epilogues." You might also like to call them "blatant advertisements." I am really sad to say that after reading this issue, I thought the epilogues took up half the comic. In actuality, they take sixteen pages, as opposed to the main story taking about forty or so pages. It is quite stunning how the authors of this comic managed to deliver so little in forty pages that the ads seemed equally substantial. Anyways, the epilogues are basically little vignettes of what certain characters are doing now that Fear Itself has ended, each one ending with a "Story continued in [book title here] so buy it now" message. I know its hard to demonize a business for wanting to make money, but the tactics used here just seem so disingenuous to me that it really is a little upsetting. It is entirely possible that I am over reacting to this, so if it does not bother you, then don't let it. 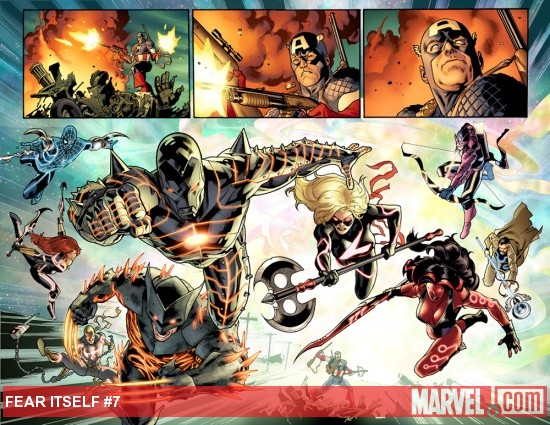 I think the weirdest part for me was the Hulk epilogue. So, the second epilogue is Hulk, all pissed off out in the desert, and in his head he and Banner are arguing. Hulk gets frustrated, says he wants to be alone, grabs Banner by the neck, and in the next panel they are both standing next to one another out in the desert. Banner and Hulk are now two separate physical entities. Kind of cool, I'll admit. Even the art is better on these pages. "Buy Hulk #1." Then there's another epilogue, whatever. However, the next epilogue has us back with Hulk in the same exact desert we just saw him in. He hears a monster and thinks, "Oh snap, I should kill that." "Buy Defenders #1." Um, what? So, if Hulk is after a monster in Defenders, then what the hell is Hulk going to be about? Will that series just comprise the two minute interval it took for him to cross from one epilogue to the next? I am legitimately confused by how this is supposed to make sense.

When all is said and done, Fear Itself #7 is pretty much an uninteresting waste of time. I found it to be mostly boring with some placation and confusion thrown in. In my mind, the problem with so many of these big events is they promise these huge changes to the universe and then the entire story ends up being pointless and has no lasting effect. With the New 52, DC has at least taken some steps towards lasting change. I'm not saying Marvel should reboot all their series, but if they continue writing these big events, then they need to actually serve a purpose and not just exist as blatant cash grabs. If you're a big fan of Thor and the Asgardians, then this might be worth checking out, if only to see that mythology on the page and pay respects to the fallen hero. Because I am certain this death is absolutely final and not meaningless and he will not be back again in a few months or so. Absolutely not.
Rating
4.5