By: | PC News | February 15, 2011
Nerd vixen Felicia Day, best known for her web series The Guild will write and star in a new live action Dragon Age webseries called Dragon Age Redemption.  Ms. Day will play an elven assassin named Tallis who was hired by the Qunari to hunt down a rogue mage.

The series seems to be much darker and serious than the goofy tone of Day's other webseries The Guild, which chronicles the lives of a group of people addicted to an online game.  Other cast members haven't been announced yet, so we aren't sure if Felicia will be joined by her pals from The Guild, or from any of her work in the Whedonverse (She was in Joss Whedon's Buffy, Dr. Horrible, and Dollhouse). 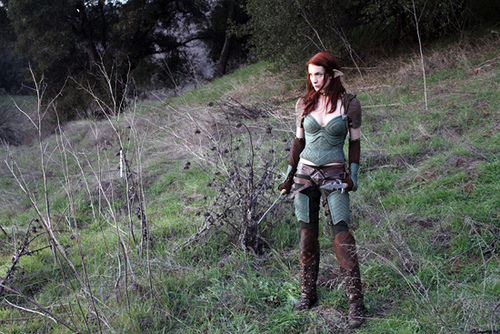 The series will have six episodes, but no date for release has been announced yet. We can probably expect the first episode in the next three weeks, as Dragon Age II comes out in March, and this will most likely be timed to coincide with that launch date.

You can watch a sneak peek of the series on Jimmy Fallon on February the 16th, and read more about this history of the project on Felicia's blog.  If the two available pics of Felicia in her elf ears aren't enough, have a look at some of her work on The Guild, in the video below.