Fialkov Walks Out on DC Over John Stewart Death Plot

Word is that the apology and assurances Dan Didio gave, in regard to the heavy editorial interference in projects that had already been greenlit, during the recent DC creative summit in North Carolina had an expiration date of less than a week. Joshua Hale Fialkov is now the latest writer, following hot on the heels of Andy DIggle, to walk out on the publisher.

Fialkov was supposed to be a star on the rise at DC Comics. While not a strong seller, his I, Vampire series was one of the more critically acclaimed titles of the New 52. Its finale issue is coming out soon. DC editorial seemed to realized his talent and burgeoning popularity, so they made him one of the new writers of the Green Lantern franchise by giving him both Green Lantern Corps and Red Lanterns.

No offense to Robert Venditti or Justin Jordan, but Fialkov quickly became the most exciting thing about the post-Geoff Johns Green Lantern franchise. In interviews, Fialkov successfully gave the impression that he had a strong vision for what he wanted to do with his books. His concept of bringing more crime drama into the premise of what is essentially a galactic law enforcement organization was perhaps the only thing fresh and new about the upcoming Green Lantern regime change. Other writers stayed vague and implied they would just be continuing on from where Johns left things off. Fialkov had a plan, and he did a good job of letting us know it.

So, of course, he’s the one who ends up going.

As reported by both ComicBookResources and Bleeding Cool, the key factor in Fialkov’s decision was an an editorial mandate for him to kill off John Stewart. As such, I certainly can’t blame him for leaving. 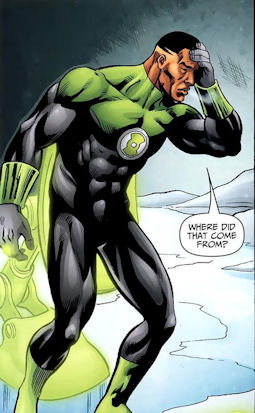 John Stewart is easily one of DC Comics’ most prominent black characters and likely the most prominent black character outside of the comics thanks to his major role in Justice League and Justice League Unlimited. To many fans who don’t read comics, Green Lantern is John Stewart. And as I pointed out in a recent review for Green Lantern Corps #18, he is a character who has been inexcusably mishandled by DC for years. Even as the New 52 came about with the claim of improving its diversity, John received the least attention of any Green Lantern. Hal Jordan still starred in Green Lantern despite sharing the stage with Sinestro. Kyle Rayner got his own new title Green Lantern: New Guardians. And Guy Gardner shared the stage with John in Green Lantern Corps while also appearing in Justice League International. The Green Lantern franchise did not hold up well in terms of diversity until Simon Baz was added to the franchise. In fact, unless that was an artistic mistake with Kyle’s father in a recent issue of Green Lantern: New Guardians, DC may have even gotten rid of Kyle’s half Hispanic background.

Bleeding Cool is now reporting a rumor that DC has already backed off the decision due to the backlash this has sparked. While that’s good news, it’s still disappointing that DC was still planning to do this in the first place. Despite claims to the contrary, the New 52 has not veen very friendly toward diversity. In fact, it may be worse off now than it was before. Mr. Terrific’s poor quality series has diminished his role in the DC Universe. The black half of the Firestorm duo, Jason Rusch, has been pushed out into the sidekick role. Static has been dumped off in character limbo since his terribly handled series. He joins Aqualad there, since Bob Harras has come out and stated that they have no plans to do anything with the character. Crux, the much talked about black member of the Red Hood and the Outlaws cast, stuck around for about a minute. Renee Montoya is missing. Cassandra Cain has probably been wiped from continuity mostly. Connor Hawke definitely has. And now, DC was willing to kill off one of the few prominent black characters that is still around.

In summary, DC sprung a controversial decision on one of its writers. That writer chose to leave rather than put up with the choice and that manner of editorial conduct. Further angry reaction to that controversial decision then (possibly) caused DC to back down from it. The result? DC has lost a promising writer it helped build up and undermined its new era for the Green Lantern franchise before that even got started.