Zack Snyder has placed his stamp on another motion picture; out this Friday is Sucker Punch, a highly anticipated bit of eye candy starring a bevy of young starlets. In the story, Babydoll (Emily Browning) is institutionalized by her wicked stepfather and held captive by Blue (Oscar Isaac) and Madam Gorski (Carla Gugino). Sucker Punch is an epic action fantasy that takes us into the vivid imagination of a young girl whose dream world provides the ultimate escape from her darker reality. Unrestrained by the boundaries of time and place, she is determined to fight for her freedom and urges four other young girls—the reluctant Sweet Pea (Abbie Cornish), the outspoken Rocket (Jena Malone), the street-smart Blondie (Vanessa Hudgens) and the fiercely loyal Amber (Jamie Chung)—to band together and try to escape before the mysterious High Roller (Jon Hamm) comes for Babydoll.

The trailers and clips scream Snyder, right down to the highly stylized dream world reminiscent of his 300 landscape. But Snyder distinctiveness is one piece of this puzzle. Although this is the first original work of his filmography, it has splices of other movies you may recognize. The first obvious connection is any other movie by Zack Snyder. Here's the rest. If we're missing an ingredient, let us know.

Robert Rodriguez knows a bit about aesthetically pleasing visuals. In 2005, Rodriguez brought one of Frank Miller’s dark and seedy graphic novels to the big screen with eye dazzling results. The movie is primarily seen in black and white with only a single detail of each character appearing in color. Red lips, yellow skin, blonde hair, you get the picture. Rodriguez turned what could have been another crime story, another obscure fanboy film based on largely unknown source material, into a delectable dish for the senses. Snyder looks to do the same with the imaginary world he fashions in the mind of central character Babydoll. Her dream world is like an urban wasteland complete with the scorched markings of dragon breath and gun smoke.

One Flew Over the Cuckoo’s Nest

It sucks to be imprisoned for a crime you didn’t commit. Well that is not quite the story of Jack Nicholson’s award winning turn as McMurphy in 1975’s One Flew Over the Cuckoo’s Nest. Nicholson played a no-goodnick who wants his jail sentence to be breezy so he fakes madness. He lands himself in an insane asylum with a dictatorial nurse, the famed Nurse Ratched. McMurphy attempted to rally fellow incarcerees to beat the bricks and hightail it out of the joint, but he didn’t make it out alive. Babydoll is in a similar dilemma when her sick stepfather locks her away in an asylum with the evil Dr. Vera Gorski, a slithery-tongued madam. Babydoll is out to escape her living hell but she may suffer the same fate as McMurphy.

“Your mind is the scene of the crime.” Remember that? Of course you do, it was last summer. 2010 had one standout original work and that was Christopher Nolan’s Inception. Dreams blurred with reality as Cobb and his team delved deeper into the psyche of their target and fought against defenses that could leave them in literal limbo. Babydoll has a dream she controls; her fantasies unlock a world where she is indestructible. Yet somehow that world will influence her ability to escape the real terror she exists in each day at the mental institution. I just want to know if that top is still spinning.

The Sisterhood of the Traveling Pants

Girls with guns, nuff said. Okay, what does that have to do with The Sisterhood of the Traveling Pants? I’m glad you asked. Whereas those young girls in the family comedy dealt with angst and friendship through a pair of magical jeans, Babydoll and her friends fight to keep their innocence while being sexually exploited in a brothel by sharing bullets and nun chucks. It’s a stretch but you get where I’m going. 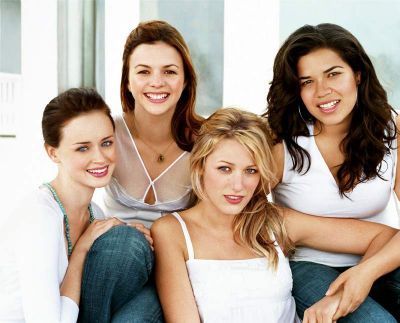 Snyder said it himself. Although this is his first original work, he is influenced by the age-old story Alice in Wonderland. In his words, “it’s Alice in Wonderland with machine guns.” The two movies share epic battles, virginal leading ladies, larger-then-life and otherworldly characters, and of course a quest.

Could Emily Browning be any paler? That cherubic white face reminds me of Walt Disney’s most famous princess and with the number new fairytale projects kicking around, she could end up cast as her in the future.

Wicked stepmothers are so 1950. In Sucker Punch, our lady in peril has to fend off a pedophilic stepfather who sticks her in lockup with a pimp. Moreover, trailers have Babydoll blowing her platinum blond hair off of her sweat-beaded face as she scrubs an endless hallway reminiscent of Cinderella or Snow White's never-ending chores. The pretty little thing was not prepared for hard labor, and is desperately in need of a prince charming and glass slippers. Throw Inception, Sin City, One Flew Over the Cuckoo’s Nest, The Sisterhood of the Traveling Pants, Cinderella, and Alice in Wonderland in a pot and the brew you’ll be tasting is Zack Snyder’s Sucker Punch. Check it out tomorrow, when it opens nationwide.