Entertainment Fuse jumps straight into the action in the new Final Fantasy game from Square-Enix. Final Fantasy XIV: A Realm Reborn has been in development for months since they closed the servers on Final Fantasy XIV, and after a huge wave of complaints about the game they decided to have a change in personnel behind the scenes and have completely rebrand the game which is now known as A Realm Reborn. In the review we look at the aspects of this game which could lead to it being a massive success or indeed a waste of time like the last title. Watch the review below to see my opinions on a game that could be make or break for the series. If you prefer the traditional text, it is below after the video.


It was a really tough week for the guys sitting behind the scenes at Square-Enix. Final Fantasy XIV: A Realm Reborn was pre released to pre-order and special customers three days before the official launch. Not that they had much chance to play it that is. The game was riddled multiple login errors which Square-Enix explain was server overload. Now, all MMOs have problems on launch right, but this was different. This was due to a mass server overload on the European and North American servers which led to Square-Enix limiting accounts, and stopping sales of the game whilst allowing current users to create only one character per account only until the worst passed by. This is in a massive contrast to the disaster of the first Final Fantasy XIV online where most servers were ghost towns. Is this a good sign? that people actually still want to play the game? Well to put it bluntly Final Fantasy XIV was a disaster. It had poor graphics quality (which even though wasn't great to look at) still demanded a high powered PC to play at 60 FPS. The storyline wasn't exciting at all. The European player base was small. The questing was a chore rather than something to immerse yourself in with the storyline. Well things went under a massive change recently with the rebranding of FFXIV Online to Final Fantasy XIV: A Realm Reborn and I delve in deep into the world of Eorzea to see if Square-Enix could revive a game that was somewhat already dead and buried.

Final Fantasy XIV: A Realm Reborn takes place in the fictional land of Eorzea, five years after the events of the original release. At the conclusion of Final Fantasy XIV, the primal dragon Bahamut escapes from its prison inside an artificial moon to initiate the Seventh Umbral Era, an apocalyptic event which destroys much of Eorzea. Through the gods' blessing, Your character escapes the devastation by travelling in time five years into the future. As Eorzea recovers and rebuilds, the player must deal with the impending threat of invasion by the Garlean Empire from the north.


With character creation whole process looks incredible, really sleek and very easy to navigate. There are multiple customization options that give you a diverse amount of creation possibilities to make your character look and feel how you want. The characters themselves follow the traditional final fantasy themes and look beautiful. You get to choose your birth date and different deitys which slightly affect your base stats. The one thing I didn't like was the surname which you are forced to pick. I couldn't find a way around this and found it quite annoying as I feel it’s easier to identify with others in MMO’s by just the one name but overall the broad range of customization options given to make your final fantasy toon makes the whole experience enjoyable and rewarding.

Every character in realm reborn can be every class. The game features the Archer, Gladiator, Lancer, Marauder, Pugilist, Conjurer and the Thaumaturge. A good range o f classes that should suit everyone's play style and again it follows the traditional Final Fantasy theme. You're stuck into one class until you hit level 10 and have done a quest in your first class, but as soon as you do that, you can start unlocking and playing other classes on your character. Even better is that the abilities that you learn on other classes can be used on your first class and vice versa. for example If you've leveled a Gladiator and want to try playing a Marauder, you can gain access to several of your defensive Gladiator skills to help your tanking as well as your marauders skills. It is good that you can create a hybrid style of class that should suit the way you want to play.


Questing in a real reborn is pleasurable. I wouldn't say it’s much different from the competition but it follows a decent path through the starting zones which is your home for your the first 15 levels of play and are designed to teach you the basic mechanics of the game and you follow quests like you would expect from most MMOs, Gather this, Kill that etc. One thing that’s annoying is that there isn't any spoken texts during questing. It is all dialogue with the added huff or puff which is something I would have liked to have seen and where MMOs like star wars the old republic really got well. The world around Eorzea is interesting enough however and the quests follow a decent path winding through the zones so that you see a lot of content When you hit level 15, so long as you have kept up with your campaigns, the real journey begins and you will have the chance to travel to the other three continents and finally, group up to do Dungeons with other players. 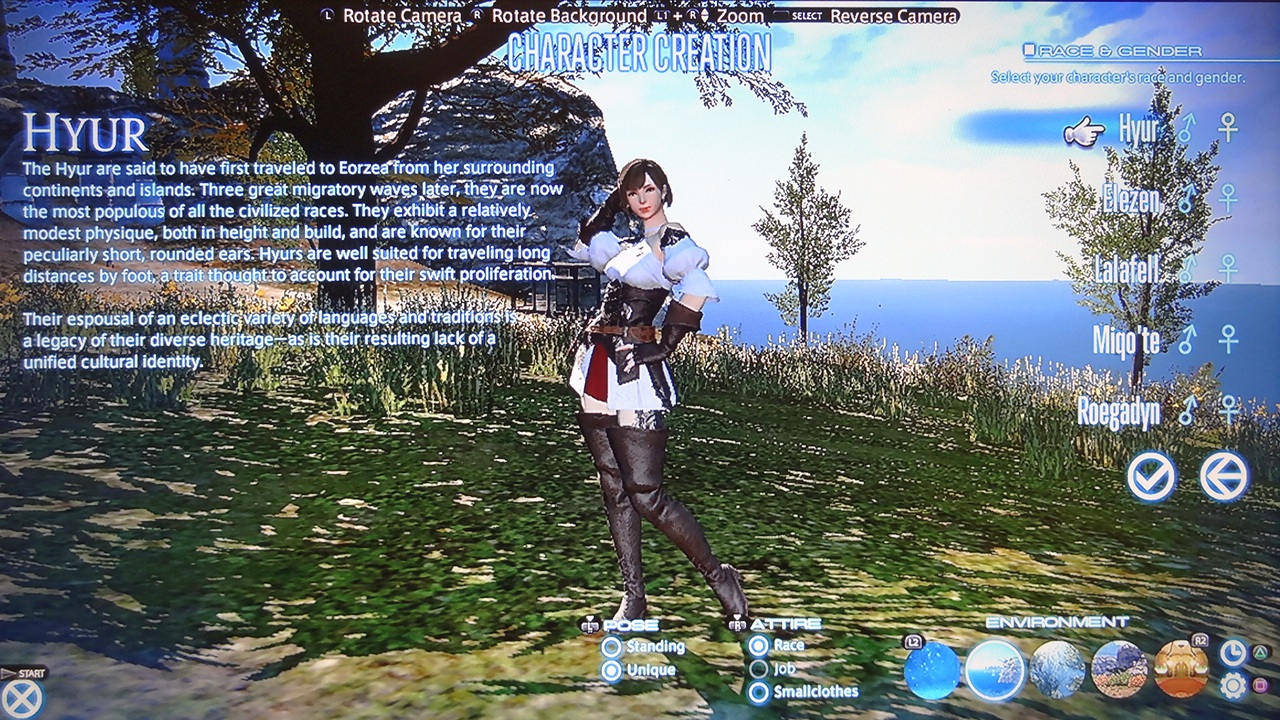 The combat in A Realm Reborn feels more fluid and trouble free compared to the first offering. During combat you have free reign to move around and group killing is a rich experience that’s fun and enjoyable to compete in. In fact the game has a rift style event system where random mobs will unearth in the middle of a zone and you and your fellow adventurers can band together to take them out and when completed you will receive money, armor and experience. There's nothing ground breaking here but the formula is solid and tested and I feel group combat will become an integral part of this game. Like it would be with any MMO.


In order to start crafting in this latest iteration, you must first equip the tool that belongs to that class. You're probably wondering where you can get hold of these tools but you need not worry about that. Once you join the guild of your choice you will be given a simple introductory quest where you speak to an NPC within the guild. This person will then give you the level 1 crafting tool for this class. At around level 5 you will need to upgrade your crafting tool to a better one These better tools can be obtained through crafting, from class quests, buying from other players or by visiting the shops and speaking to NPCs. Crafting includes Alchemy, Armour crafting, smithing, carpenting, culinary creation, goldsmithing, leatherworking and weaving. again similar professions to other mmos. The experience is at some times tedious like in every MMO but the benefits are always there at top levels.

One thing that sticks out in Final Fantasy XIV: A Realm Reborn is the excellent music and sound scaping in the game. The music follows the traditional final fantasy sound style and in short sounds incredible. The music flows through the game with an array of orchestral arrangements with a great aura of that mystical and magical feel that final fantasy is trying to encompass. This works brilliantly and really creates an amazing atmosphere to play the game in.


The game also looks brilliant and is vastly improved from the first offering. Running the game on full desktop graphics is a real pleasure and far superior than other titles in the genre. The whole environment is steeped in magic and the graphics compliment this by being bright, vast, colorful and sharp which really adds to the value of the excellent music. The landscapes look really mythical and magical and the cities look great as well. they have definitely improved this over the first one which really required a high end machine but with no real reward in terms of great graphics.


Overall the whole experience of Final Fantasy XIV: A Realm Reborn is positive. Apart from the initial server loading problems and downtime the title has vastly improved over the first game and apart few personal gripes such as the need for a surname and the written quest text, nearly everything has been worked on and revamped. If you’re a fan of the MMORPG genre and of Final Fantasy games in general then I recommend picking up A Realm Reborn. It will not disappoint you in making you feel part of the special world that is always created by Final Fantasy. Square-Enix have promised constant patching and quarterly updates which will keep the game fresh and new. Let’s hope this rebirth will now allow the game to flourish into the great game we all expected the first time around and not get stuck in infancy like its predecessor.