"Not a bad intro to the series, while being fun for fans too."
By: Edward Oliveira | Movie Reviews - Wii-U Reviews | February 10, 2017
It was five years ago when Nintendo stated if Fire Emblem Awakening didn’t sell well, it’d be the end of the franchise. Fast forward to today, and we recently had a Fire Emblem-themed Nintendo Direct talking about four upcoming Fire Emblem games. It’s so important to Nintendo now, they made a Fire Emblem mobile game to spur further interest into the franchise. And luckily Fire Emblem Heroes is fun enough to make fans want more. The game is introductory enough to enlighten those curious enough to perhaps snag a 2DS to play the real ones. 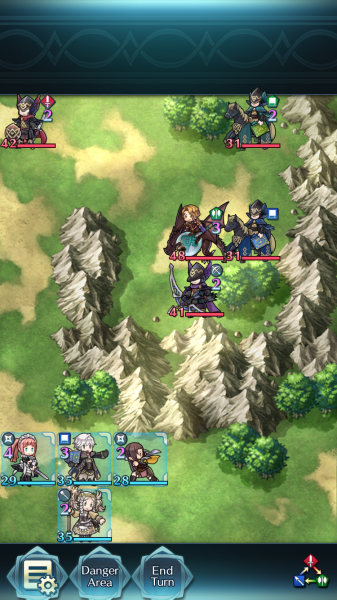 So Fire Emblem Heroes is the game Nintendo’s investors have truly asked for. It's a legit free-to-play game with alternative easy-to-buy microtransactions. A “gacha” game where a lottery decides where your free or paid orbs go to, much like how Brave Frontier or Final Fantasy: Brave Exodus does it. Though it’s not innovative as you expect from Nintendo on newer hardware, it’s a supremely polished mobile game that gets things right, whether it’s playing the core game or being a better alternative to many of these gacha games in practices. Characters come in different star levels. However upgrading them are such a pain, you want to keep summoning to unlock a better version. For instance, I just kept trying to crack a 5-star Robin than to just use the several 3-star ones I got earlier. Nintendo bumped the production values with this game versus their other mobile experiences with voice acting and nifty summon cutscenes when cracking good characters. Users are more inclined to spend money to have the glitz and glamour of the gacha lottery. This isn’t really a knock on Nintendo for doing it than a sad standard to the genre. It’s pretty much what casinos and real lotteries do to grab gamblers). However Nintendo does a better job because they make it easier to unlock better characters the more you fail on summoning 5-star units. 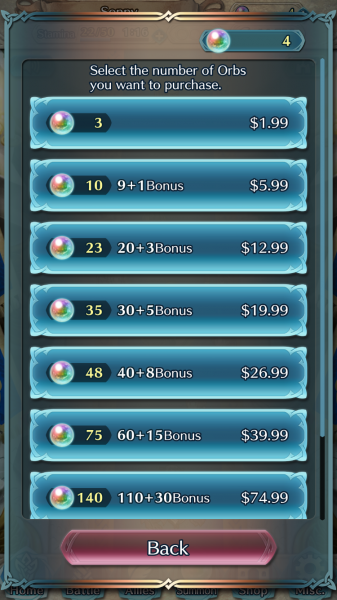 Fortunately, the game plays great. It’s not a full game experience like what Square-Enix did when they ported Final Fantasy Tactics: The War of the Lions. This is a bit diluted in order to have a more fluid and quicker mobile experience. All maps are on a 6x8 grid and you click and drag to have you units move and attack. The interactive portion of the combat is as simple as that. You have to organize your 4-unit team to defend against classes that are strong and weak against it. Swords, Axes, Spears, and tomes have advantages and disadvantages. Colorless knives and staves meanwhile have no definitive advantage for or against them. One thing that is missing from Heroes is something we usually see in RPGs: luck. Critical hits and misses are totally absent from the game. This means when you hover over a unit, the damage you see that you can give and take are absolute. It’s annoying because not only are crits flashy in recent games, it really helps disadvantage units squeak by or add an unpredictability factor to the equation. This means you have no chance if you are in a tight spot, and will just save time surrendering. 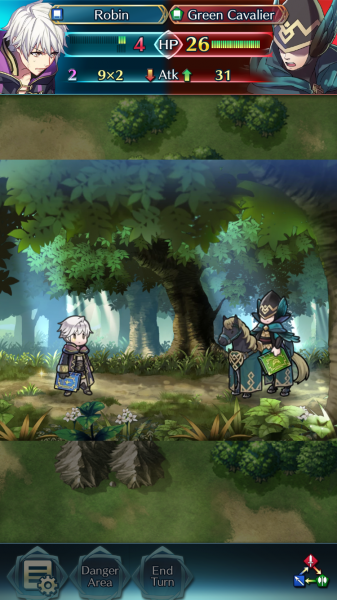 Characters also earn points to further abilities when they level up or defeat a foe. These are equipable and have higher variations when a character’s star level goes up. They range from a better weapon for more damage to abilities that trigger after so many turns or when something specific happens or passive abilities to itself or allies around them. It’s pretty neat as it’s different, but it’s a lighter alternative to the main games where you equip weapons or other items. Like many games in this mobile genre, there’s a stamina gauge that ticks away with each battle. Of course you’re locked out of continuing when it’s depleted. The beginning has little problem as each battle only uses a couple points of the 50-point meter. Later on each fight costs you 19 or so means you can only play for a little bit. After playing regularly since launch, I’ve been still yearning to play once I’m cut off, but not enough to spend orbs to refill the bar. I did spend all my platinum coins on My Nintendo to get items in it though. 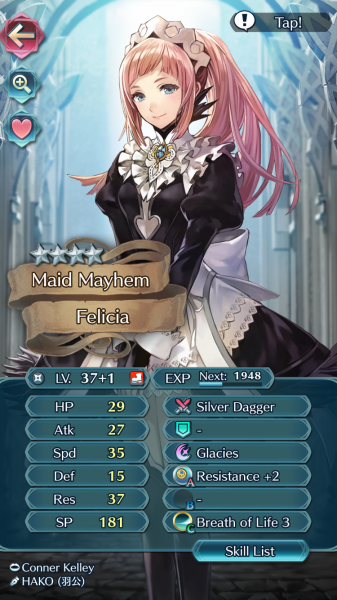 The maps being much smaller are great for the shorter play sessions. The developers however designed the maps to have a ton of bottlenecks to restrict your team. I get if some do it, but a vast majority of them has these tight squeezes. You have to arrange your team in a line time and time again. Also, some enemies won’t move unless you get within their area of attack. Stalling them into those bottlenecks for your own advantage is a crapshoot. There’s kinda of a story going on in Fire Emblem Heroes. You're a commander for these two royal siblings of Zenith. You need to summon heroes from other Fire Emblem worlds in order to snap the ones out of brainwashing from this dull magical girl named Veronica. There are story-based prologues to do, but they aren’t available yet as of this writing. Other than the story, you can fight random players’ teams online to up a ranking. There's also grinding in the training area or of the daily/weekly/monthly special battles. Honestly once you do the story at all difficulties, you’re only grinding, summoning and doing the chores within the game. Hopefully they add stuff soon to not bore the core audience, who’s probably filling their tactics itch before Fire Emblem Echoes launches in May. 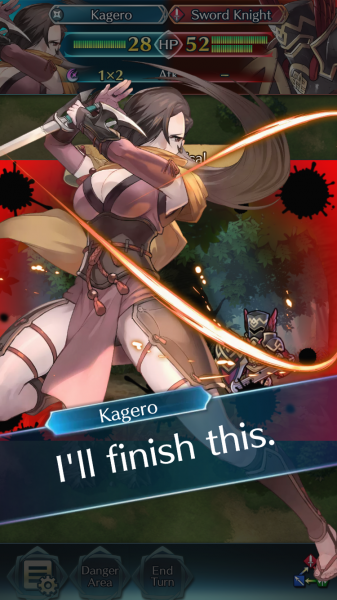 Fire Emblem Heroes does the job it was created to do. It’s a fun little strategy RPG in itself, it’s captivating when summoning characters. The game really makes me wish I had Fire Emblem Echoes here now. It also adds something unique to the crowded mobile gacha market. Fans of the genre however may feel it’s lighter than others due to it being a younger game. Like any other mobile game, this is a review based on the version that launched day one. The game should evolve throughout it's life, so while it’s a bit light on content, that is hopefully changing. Hopefully Heroes inspires players who have never played Fire Emblem to try out the main installments, because it makes a good introduction.
Rating
8.0
Pros