By: | PC News | September 27, 2011
The first details of the next game in EA's Dead Space sci-fi survival horror series may have been leaked. The news comes from Silliconera, who is reporting on information from their source within EA, the same source responsible for the Syndicate leaks.

The leaked information reports that the third game in the series will set Isaac on a hostile ice planet called Tau Volantis, which is presumably undergoing a Necromorph infestation. The game follows Isaac after his ship crashes on the planet. While he initially believes himself to be the only survivor, he soon discovers that there were other survivors of the crash, including Ellie (Isaac's companion from the previous game) and Isaac sets out to find them. Along with the Necromorphs, Isaac will also come face-to-face with a new Hive Mind. It should be interesting to see how a huge, more open setting affects Dead Space's gameplay and atmosphere.

While the existence of Dead Space 3 isn't a surprise (the game's logo was leaked during an Israeli TV show about EA's Redwood Shores Studio), it's a surprise that we would hear so much so soon after the last game. 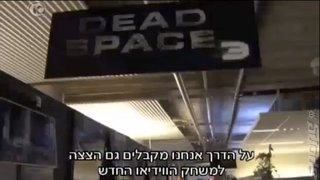 While the eventual release of Dead Space 3 is a fair way off, expect more information and details on Isaac's new adventure in the future.