The first image for Pacific Rim is out and it's nothing flashy, but it's sure to get fans of Guillermo del Toro excited. Many were disappointed when del Toro had to abandon his plans for an adaptation of At the Mountains of Madness because of budget issues, but what started as a fall-back plan could quickly ramp become one of next summer's biggest movies.

A tribute to Japanese giant monster movies of old, Pacific Rim takes place in an alternate universe where humans are threatened by the appearance oversized beasts from the seas called Kaiju (a nod to the original genre's name). To save us from getting stomped en masse, giant robots called Jaegers are developed to combat the emerging menace, which requires pilots to handle the gargantuan hardware. 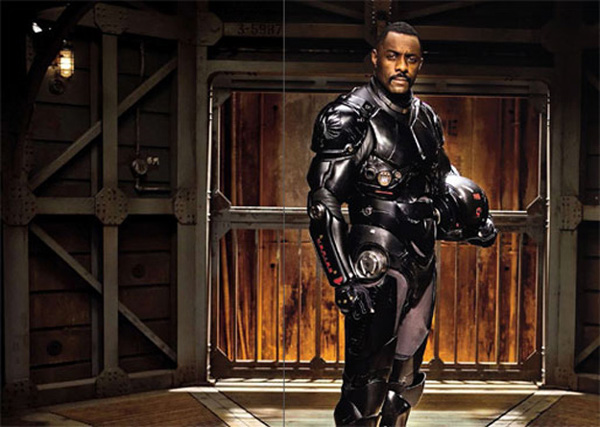 The image is really just star Idris Elba standing around in character as Stacker Pentecost, but it's what he's wearing that'll grab your attention. Showing off what looks like a mechanized motorcycle suit, Elba is all geared up to pilot one of the massive Jaegers, which shouldn't be a stretch for him after captaining an interstellar spacecraft in this weekend's Prometheus.

Expect plenty more rumblings from Pacific Rim in the run-up to its July 12, 2013 release date.