The 2009 genre-melding hit, which starred a pre-Zuckerberg Jesse Eisenberg and pre-Easy A Emma Stone, is being adapted for the small screen. Amazon, which is going the Netflix route by adding original programming to its list of services, has ordered the pilot to join a variety of programs which will be made available in unison. Unlike Netflix’s original series, which are picked up as entire seasons and all episodes are released at once, Amazon has only committed to the pilot and will decide whether to further develop the series based off of customer feedback. With the current zombie-mania in pop culture today (almost single-handedly fueled by The Walking Dead) there might be a huge audience draw and interest just based on the premise. Depending on the quality of the pilot this could be a great hit for Amazon, or just become a knock-off exploitation of what is dominating the zeitgeist.

The film was a critical and commercial success when it was released and Amazon is definitely eager to replicate that success, the movie’s writers Rhett Reese and Paul Wernick will reprise their creative roles and author the pilot. Producer Gavin Polone will also come back to produce the project for Amazon. The involvement of the film’s creative talent should assure fans of the film of the quality of the potential show and might help in bringing in the established fan base. Plus, the writers will hopefully be able to recreate the necessary tone and overall quality of the film and translate that into a television format. Kirk Ward, Tyler Ross, Maiara Walsh, and Izabela Vidovic are cast in the lead roles originally played by Woody Harrelson, Jesse Eisenberg, Emma Stone, and Abigail Breslin. Here is the first production still of the cast: 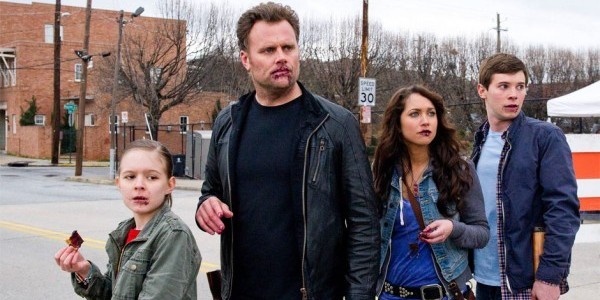