Start shaking up some martinis and screw on your silencers—Bond is back. The first teaser for 007's 23rd adventure, Skyfall, has just been released. As if out to prove that MGM's financial troubles have done nothing to tarnish the brand, the first look at Bond's latest mission comes barely six months after filming began, but shows no lack of confidence that this latest entry from director Sam Mendes will vault the franchise back to the same heights realized by Casino Royale.

That's not to say we're in for a rehash however. The teaser is a moody one, setting the tone for another introspective take on Ian Fleming's enigmatic secret agent, though a closing action montage backed by some pulsing electronica is sure to help get the blood pumping. Seems Bond is in a bit of rut since last we saw him (who wasn't after Quantum of Solace?). Between shots of his uncharacteristically haggard face and a firing range dummy with two holes far wide of the mark, it looks like MI:6's best agent is off his game. 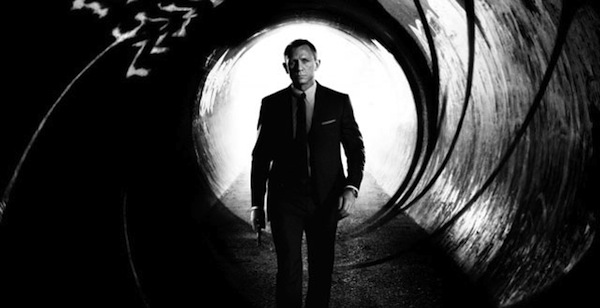 The downbeat game of psychiatric word-tennis he plays while being monitored by M (Judi Dench) and newcomer Gareth Mallory (Ralph Fiennes) takes a turn once the titular Skyfall is mentioned, and its enough to put the spark back in returning star Daniel Craig's baby blues. It looks like all it will take is an intimate shave with new Bond girl Naomie Harris to get Bond back in fighting form.

From there its a big mishmash of locales and setpieces, including a few skylines and, yes, some falling. Shanghai joins the travel itinerary this time out, while things appear to be literally going off the rails in London. And while there's no clear sign of Javier Bardem as the villain Silva, it's almost impossible not to peg him as the shadowy figure lumbering away menacingly from a burning countryside manor. Check it out for yourself below, and prepare to start anxiously waiting for Skyfall's November 9th release.