By: Justin Moody | Comic Reviews | June 21, 2010
Issue three wraps up the "Angel Smerti" storyline for the Spirit. In the second issue, the Spirit was badly beaten by Smerti forcing him to crawl to Ellen's house to be patched up. In his weakened state, he failed to realize that he might be leading her straight to Ellen. Fortunately for the Spirit, Smerti has taken to him. She finds him interesting enough to keep him around a little longer before delivering him to the Octopus.

The issue is basically one long fight scene between Smerti and the Spirit. All the while she's trying to figure the Spirit out. Then, she stops playing with the Spirit and is forced to deliver him to the Octopus. But somewhere during their fights and conversations the Spirit figures her out and gets underneath her skin.

She decides to kiss him goodbye and with that one kiss... falls for him. It's too late for them of course, as the Octopus and his men show up. Smerti makes a decision, she's going to die to find herself and in doing so she'll save the Spirit. The story ends with the Spirit getting away to fight another day and the question of what happened to Angel Smerti. 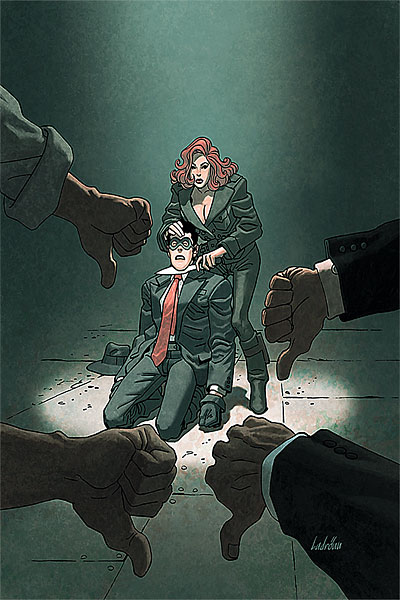 The backup story is the best so far as it tells a story of its own rather than trying to make a tribute to the character and Will Eisner. The story is about exposing the owner of Pox media group for a wanted war criminal. The Spirit uses his cunning abilities to defeat the corporate giant with his own best tool... the media. It's a short, sweet and brilliant story. The art and story are just classic Spirit and a must read.

Mark Shultz (Tom Strong) and Moritat (Elephantmen) continue to be the perfect team for this book. It's a successful second launch of the series since DC took over the character. Shultz focuses on telling a great story and capturing the essence of the character. He uses the narrative and dialog to complement each other and give a rich and full story for the reader to follow.

Oh, and the art, simply beautiful! Personally, I can't understand how people can not like the art. Yes, the Spirit's face looks older instead of younger at times, but there are reasons for it: A) He's a dead guy and B) It's used to convey the emotion of the situation that the Spirit is in. It's gorgeous to see a character at his weakest and for him to actually look it! Whereas the Spirit looks bloody and beaten almost the entire time, Angel looks beautiful and sexy the entire time. Even fighting, she looks good, which is the point of the franchise. The women are always beautiful and the men are always down beaten and ugly.

A new storyline begins with the next issue but it's not too late to catch up to one of the more interesting titles from DC's heavily neglected First Wave line. The Spirit continues to add to the legacy of Will Eisner and is just a great title to read. Some may look at it and think of the movie or the previous series from DC and pass on it, which is a shame. This book is nothing like either of those and definitely steps out there shadows.

DC really needs to support the "First Wave" line before it becomes the "Huh? What?" line. Follow Dustin on Twitter and leave a comment of your favorite Spirit story or moment.