By: | PC News | December 20, 2011
The Humble Bundle IV is already a great deal in that it gives you seven awesome indie games for whatever amount you want to pay, but it just got better because they are now adding in the five games from the third Humble Bundle, bringing to total to twelve great indie games.

To be more exact, the Humble Bundle lets you have five games for any price: Jamestown, Bit.Trip Runner, Shank, Night Sky HD and Super Meat Boy, but if you donate more than the average amount ($5.15 at the time of this writing), you'll also get Gratuitous Space Battles, Cave Story+, and now you'll also get five additional games, Crayon Physics Deluxe, Cogs, VVVVVV, And Yet It Moves, and Hammerfight. 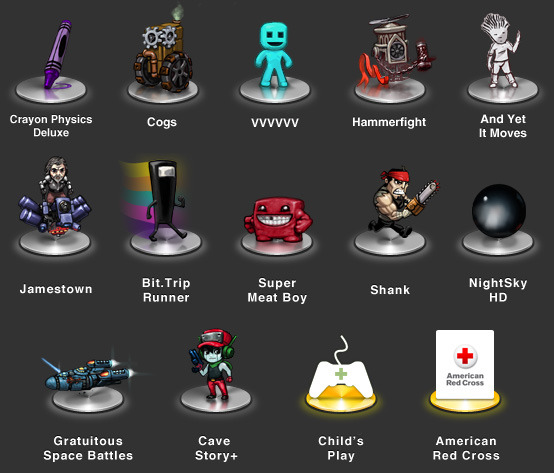 Your donations are divided between the game developers and several charities, so you can tell all of your friends about your humanitarian efforts this Holiday Season.  The Humble Bundle is available at HumbleBundle.com, and don't forget to check out our glowing reviews of Jamestown, Super Meat Boy, Shank and VVVVVVV.