By: Justin Moody | Comic Reviews | August 14, 2010
When it comes to DC characters there tends to be two warring factions. One side that craves for the original character to return to their mantle and the other happy with the character that took their place. DC has two such instances that have left their fans hostile to say the least. The first was the replacement of Hal Jordon with Kyle Ryner. There were internet petitions condemning Kyle and asking for the return of Hal Jordon. Soon enough Hal returned with the help of Geoff Johns and on DC's terms. The second instance is actually growing right now. For over twenty years fans have had Wally West as their Flash and as some have put it, they've grown up with him.

To that growing minority it must just kill them inside to read Geoff Johns newest run on Flash. To see him do exactly what he did for Hal, only this time for Barry. It might even feel a bit like a betrayal seeing how Johns wrote Wally for six of those twenty years. Really it doesn't matter if you're a fan of Wally or Barry, what matters is the sales. DC would love to have two Flash books starring different characters running at the same time, if the sales supported it. So what does all this have to do with issue four? Nothing really, it's all just a lead in to tell you how wonderful this issue is and to reiterate my apologies to all of the Wally West fans out there. 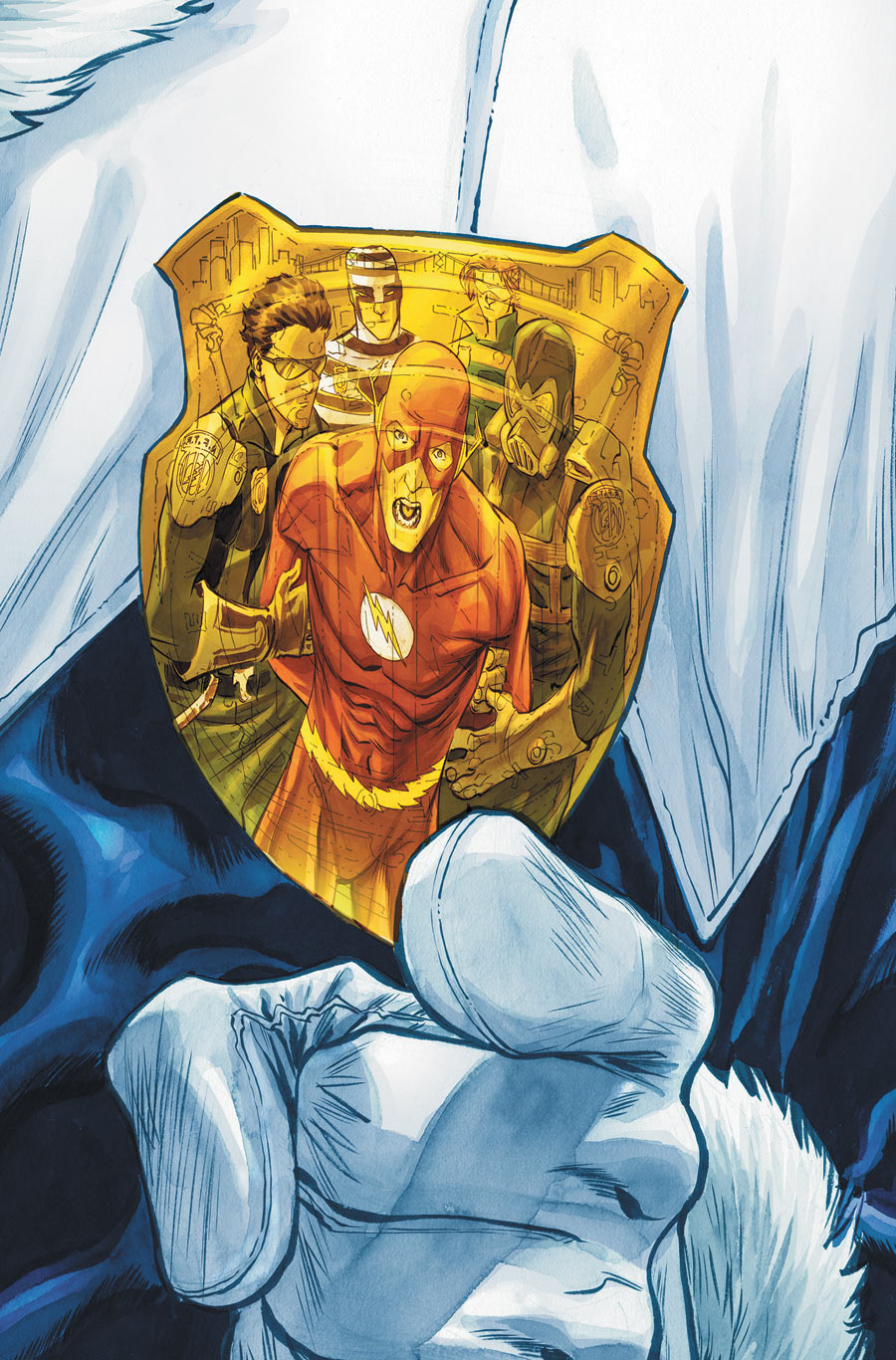 Issue four is for lack of better words, amazing. Not just the writing, the dialog, the plot and the art, but the entire product put together. It is one of the best produced comics out right now. In the previous issue it was revealed that Captain Boomerang can manifest boomerangs on his own, and upon making this discovery decided to send a message to the Flash and the other rouges. Cpt. Boomerang targets a helicopter and takes out its engine. The scene the follows is one of the most amazingly drawn moments in Flash history as the Flash saves a dozen citizens on the street, runs up a building on top of the helicopter blades and then doubles back inside of the helicopter to save the two pilots inside. It's smooth; it's brilliant and most importantly shows a lot about Barry's personality.

The question for four issues now has been, why would the Flash kill anyone? The answer: To save his wife. After saving the future Rouges from Capt. Boomerang one of them breaks the law and explains what pushed the Flash to murder. Not only is it cleaver as hell, but it's just so fitting for the title.

Johns' writing is infinitely better than anything being done on Brightest Day and frankly it seems like he's pouring a lot of energy into this title. The character he writes in Barry shows that he's not limited to just Fly-boy personalities like Hal, but that he's actually capable of telling the same quality story as he does in the Green Lantern series with a different personality. This title really is the best thing that Johns is currently writing. Green Lantern is good but it's lost the focus on the character of Hal as the supporting characters beg for their own title to grow in. Flash on the other hand is still in its infancy and has a much narrower focus making it stand out more.

Francis Manapul is quite possibly one of the fastest artists drawing comics right now. He's so fast that he doesn't even do comics full time. I wish to God he would though because I believe he's the only artist that could actually draw two monthly titles without any loss in quality. Manapul's pencils are amazing and he continues to put his own take on the Flash in action. It continues to be unlike anything ever seen on the title before. Truly if the page count were higher per issue we could enjoy even more pages of just Manapul's art as Johns knows when to retreat with his captions and narrative and let Manapul's pencils do the talking.

If you've never read the Flash before then please start now! This series will be something special in the years to come and this is a chance to be in on the ground floor. Johns and Manapul will hopefully have a long career together as I can't imagine another artist being able to fill Manapul's shoes. If you're still hating on Barry then you're probably going to be upset by just how damn good this issue is.

If you were that guy at Comic Con that asked about Wally at every DC panel even after you got the same answer two times in a row then know this... Wally sucks and you wasted everyone's time for nothing!