"Take me down to Gorilla City"
By: Anthony Punt | TV Reviews | February 22, 2017
Regular readers of my Flash reviews know that I’ve been less than enthused by the villains appearing on the show this season. Whether they’re based on classic Flash foils like Savitar—or decidedly less classic ones like Girder—the villains appearing lately on The Flash have been so cookie cutter that they should have come with baking times. What has made them so undistinguished, besides a lack of compelling backstory and clear motivations, is that they’ve lacked a certain je ne sai quois that make them competitive and compelling foes for the Flash to fight. None of the issues I’ve just described exist with Gorilla Grodd. Always one of The Flash’s most fearsome adversaries in the pages of DC Comics, the showrunners for The Flash have somehow found a way to translate that menacing figure to the small screen. It’s particularly impressive considering that Grodd is (aside from the terrific voice work of David Sobolov) a CGI creation. Surely it would’ve been difficult, if not impossible, to bring Grodd to TV audiences at anything resembling a reasonable budget. Nonetheless, in 2017 the CW’s budget, relatively modest as it may be, manages to make Grodd and his world not only credible but awe-inspiring. Aided in large part by these special effect wonders, “Attack on Gorilla City” is one of the strongest episodes of The Flash this season. 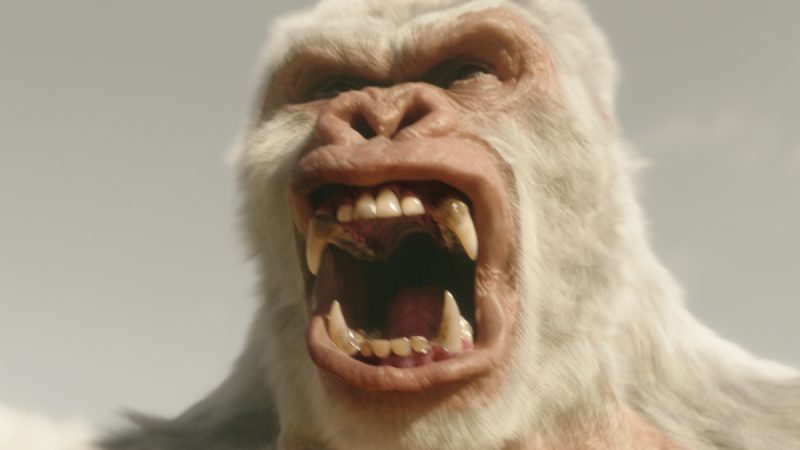 The set-up for “Attack on Gorilla City” is relatively straightforward as far as superhero shows go: Jesse Quick has come to Earth 1 in order to recruit Team Flash to rescue her father Harry, who was ambushed after responding to an encrypted message telling him to come to Gorilla City. Jesse warns the team that Grodd has designs on “vibing” from Earth 2 (where he was marooned by the Flash back in Season 2) to invade Earth 1. And with that, a team composed of Barry, Cisco, Caitlin and Julian, the latter of whom is so enthusiastic about visiting the “Planet of the Apes” dimension that he cosplays as Indiana Jones throughout the episode. (Ooh, two geek references rolled up in one!) Upon arriving in Earth 2 Africa, Cisco makes a weird comment about that world’s Africa not being so hot, which must mean there’s no global warming on Earth 2. At that moment you want to yell, “C’mon, Cisco, you’re a SCIENTIST—you know global warming doesn’t work like that!” But before the team can slap Cisco on the head for his faulty knowledge about climate change, they’re captured by a pack of sentient gorillas. Although the Gorilla City designs the show comes up with are pretty much cribbed from Planet of the Apes, the scale of the place is nonetheless impressive and gives the episode a sense of space. Team Flash are kept in cells that neutralize everyone’s powers—although there’s still no neutralizing Julian’s safari get-up—which is when Grodd pays them a visit. Except Grodd doesn’t appear (at least not at first) in the flesh, er, fur. Instead, he uses his telepathic powers to “speak” through Harry, who is trapped in the same cell as his attempted rescuers. Tom Cavanagh affects a “Grodd voice” that comes from the Christian Bale as Batman school of speak-growling which, as silly as that may sound, chillingly conveys Grodd’s power. A cloaked-in-shadows Grodd finally does appear to convince Team Flash that Solovar, the leader of Gorilla City, wants to invade Earth 1. Grodd then makes the following proposal: if Barry kills Solovar, then he will assume leadership of the gorilla and pledge to keep them on Earth 2. 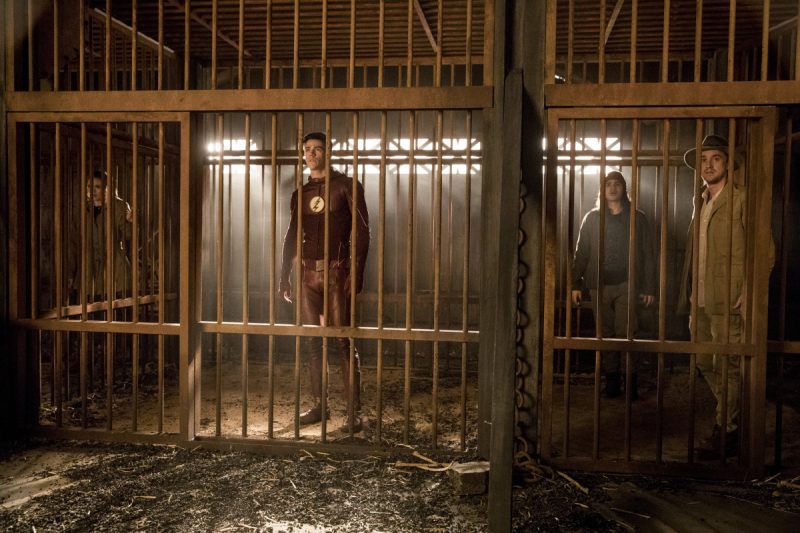 If you have a working knowledge of DC Comics lore, Grodd’s scheme is pretty transparent; in the comics, Solovar is a benevolent leader who often allies with the Flash against the insurrectionist Grodd. But even if you didn’t, you may still have guessed that Grodd was up to no good because, after all, he’s the bad guy. Nonetheless, Barry agrees to a trial-by-combat with Solovar in order to save his friends and his planet. Another motivating factor for Barry: he believes that by stopping the gorilla invasion that he’ll prevent a “future headline” around the time of Iris’s impending death. (Still not sure what one has to do with the other, but that’s a plotline for another time.) For Solovar’s part he’s convinced, likely by Grodd, that the humans pose a threat to his Gorilla City. Just as Sobolov's work gives Grodd a particular gravitas, the voice actor portraying Solovar, the great Keith David, gives him a presence as mighty as any antagonist this season. The fight between the Flash and Solovar is impressive to look at—even if the use of slo-mo action stills is excessive—and concludes with the ape’s defeat and Barry’s show of mercy in not killing him. Apparently angered that Barry didn’t fall for his ruse, Grodd has him knocked out and returned to his cell. Despite not murdering Solovar, Grodd got what he wanted out of the deal: to have the gorillas realize that the humans pose a threat to their existence and that invading Earth 1 is a necessity. Cisco realizes that Grodd will need his vibing power in order to travel between dimensions, so he comes up with the “sensible” plan of killing himself to prevent that. Barry does him one better by proposing that he be the one to die. Of course, Barry doesn’t kill himself—there wouldn’t be much of a show if he did that—but he convinces Grodd that he’s dead thanks to Caitlin’s cold powers making him mimic the effects of algor mortis. The plan leaves much disbelief to be suspended, as it relies both on Grodd not taking precautions to neutralize Caitlin’s powers and not using his mental abilities to see through the faked death. Regardless of all that, Team Flash bugs the hell out of Earth 2 with Harry in tow. It does seem a bit callous of them to leave Solovar behind in captivity. That said, given how the episode ends with Grodd in control of the apes and a brainwashed Gypsy, it’s easy to believe that we’ll see Solovar (and hear David’s sonorous voice) again this season. 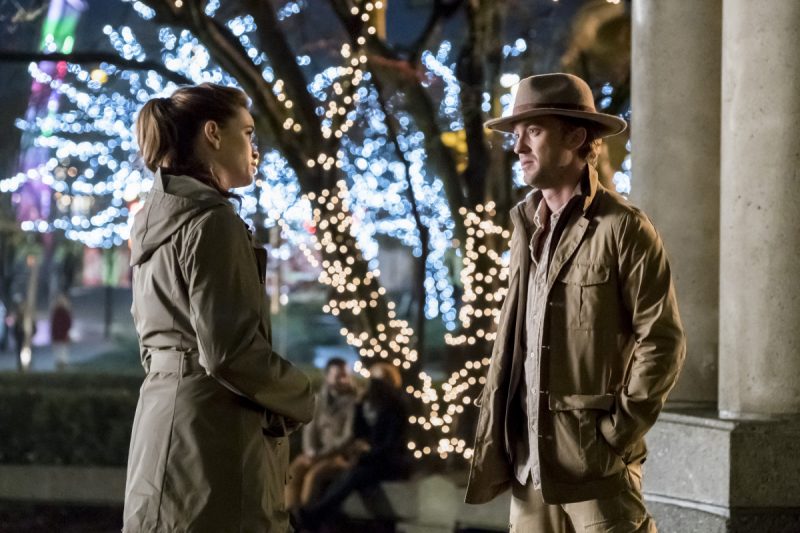 As I bring this review to a close, I should briefly acknowledge the romantic subplots that develop in this episode. The primary B plot is the budding romance between Wally and Jesse, the latter of whom decides to make Earth 1 her permanent residence. It remains to be seen what a third speedsteer can contribute to the burgeoning Team Flash lineup, but this episode doesn’t offer much in the way of credible character development to make her choice seem logical. In addition, sparks continue to fly between Caitlin and Indiana Jones, er, I mean Julian. He admits that he accompanied her on the Gorilla City adventure as a way to protect her, which sounds pretty paternalistic but Caitlin doesn’t seem to mind as she seems to be into him too. I’m sure we’ll have enough time to explore these developments in greater detail in future reviews, but for now it’s satisfying enough to bask in the brilliant glow of Gorilla City.
Rating
8.0
Pros