The Flash – Cause and Effect Review

"By forgetting, Barry learns to lighten up"
By: Anthony Punt | TV Reviews | May 10, 2017
In my Season 3 reviews of The Flash, I’ve pointed to one recurring character who has consistently impeded the show’s progress and has made it considerably less fun to watch and write about. That character is Barry Allen, or Mopey Barry as I’ve taken to calling him. Throughout this Flash season, Mopey Barry has been in perpetual angst mode about his creation of the Flashpoint timeline. Even when his guilt over it was seemingly resolved several episodes ago, it’s been reintroduced with a vengeance with the Savitar plotline. The angst level was kicked up a notch at the conclusion of last week’s episode when Barry learned Savitar’s true identity. This week’s episode, “Cause and Effect,” begins with Savitar launching into a long-winded explanation of how he came to be. He explains that he’s a time remnant of Barry created by Future Emo Mopey Barry from "The Once and Future Flash” episode; that Barry remnant then becomes Savitar after losing his loved ones and gaining some gnarly facial scars in the process. Or something. Savitar’s origin story becomes such a shaggy dog story that it was even hard for me—a person who’s watched and analyzed The Flash all season—to follow the intricacies. Confronted with this information, the “good” Barry threatens to kill the “evil” Barry until Savitar’s mechanized suit animates itself and saves its master from harm. With the “kill Savitar and renounce your heroic code” option off the table, Barry and Team Flash come up with another one of their ingenious plans to stop Savitar. It should be mentioned that Tracy Brand’s Speed Force containment device is the only thing that’s guaranteed to work—that is, it will work in the future. But I suppose Team Flash needed something to occupy themselves in the meantime, so Cisco and Julian create a machine that will inhibit Barry’s ability to retain any memory of the strategies they’ll come up with to defeat Savitar. Or something. As far as schemes go, it’s only slightly less probable and convoluted than what might be found on a typical episode of Gilligan’s Island. 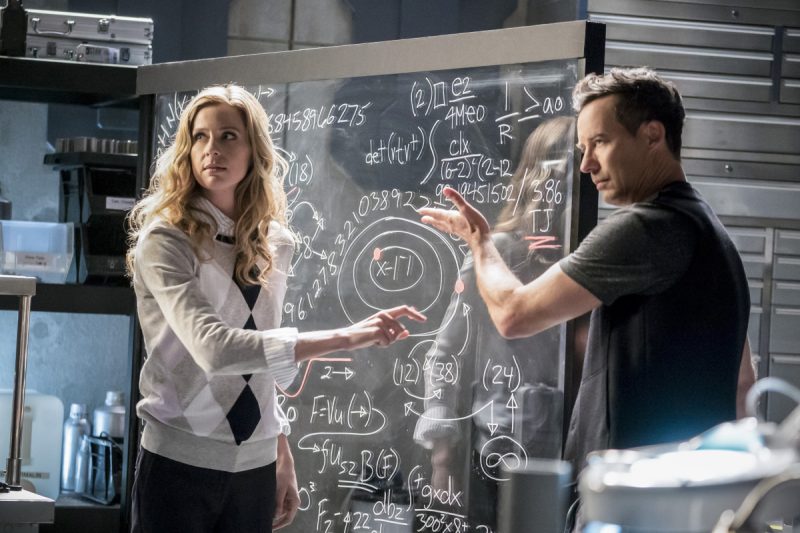 As one might expect, Team Flash’s plan goes awry, resulting in an amnesiac Barry with no memory of himself or his powers. The ironic part of all this is that it results in a Barry that’s happier, more optimistic and just-gosh-darn likable than the one we’ve seen for most of this season. Even his off-again, on-again fiancee Iris spends a good part of the episode wondering whether it wouldn’t be preferable to keep this happy go lucky version of Barry (who we’ll call HGL Barry for short). Much of the audience probably agreed with her assessment, myself included—alas, we, as veteran TV watchers, know that a plotline in which the protagonist acquires amnesia is bound to end with him getting his memories back. In the meantime, however, there’s a great deal of fun to be had watching HGL Barry take metaphorical pratfalls. As it so happens, Barry has lost his memory just as Cecile, Joe’s DA girlfriend, needs him to testify in a case against an arsonist named Heat Monger. (His appearance and MO so closely resembles Heat Wave that the latter should sue for copyright infringement.) Ordinarily Barry’s expertise as a CCPD forensic scientist would come in handy, but HGL Barry has no such knowledge. This forces Team Flash to improvise, leading to an amusing and fairly clever bit of business in which HGL Barry wears glasses with a text message readout from Julian feeding him the answers he needs. Unfortunately, Team Flash didn’t build the special glasses to be durable enough to withstand a trickle of sweat from Barry’s brow that shorts out the glasses. Because Barry is unable to continue his testimony, the judge dismisses the case—this seemed awfully improbable to me, not to mention rash, but then again I’m not a lawyer—and Heat Monger is allowed to go free. 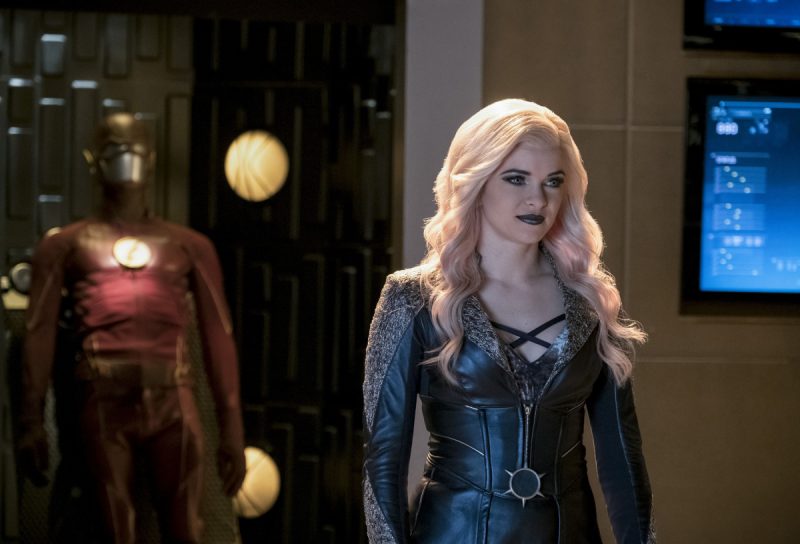 Predictably, Heat Monger immediately goes on another rampage, which means it’s a job for the Flash. Once Barry (re)discovers his powers, he’s all too willing to use them to fight HM but he lacks the experience to use them. It’s then that Killer Frost appears to lend a (cold) hand; as Caitlin Snow her expertise is in the field of bio-engineering, which makes her the ideal candidate in the Team Flash circle of trust to reverse Barry’s amnesia. She’s motivated to do it because Savitar is also affected by memory loss, so restoring HGL Barry’s memory should also restore Savitar’s. Killer Frost and Team Flash create a doohickey that delivers an electric charge to HGL Barry’s brain, but the effect doesn’t take hold until Iris forces him to recall the traumatic death of his parents. This plot point seems to contradict the HGL Barry ethos that had been established to this point, but to be charitable I suppose the memory Iris evokes could also be described as one in which she and Barry realize they need one another. In any case, it’s enough to get Barry to remember who he is and summarily defeat the Monger of Heat. In summation, “Cause and Effect” is a weird entrant in the ongoing Savitar storyline: it doesn’t advance the plot very much and, in fact, much of it is undone once Barry gets his memory back. At the same time, the light, let’s-not-take-everything-so-seriously touch of the HGL Barry scenes were much appreciated. Perhaps that aspect of things won’t be going away entirely in next week’s episode in which Barry teams up with Captain Cold to steal a gem from a giant shark. Here’s hoping the showrunners remember how to have fun.
Rating
7.0
Pros