The Flash – Escape From Earth-2 Review

"No interest in smart storytelling."
By: Alexander Wong | TV Reviews | February 18, 2016
“Welcome to Earth-2” was a real eye-opener for me. I’m used to TV shows vacillating in quality as they continue, but Team Flash’s journey to Earth-2 was the one that said these stupid choices weren’t exceptions to the rule, but the very construction of the show. How else can you explain Barry appealing to Killer Frost instead of acting, getting Joseph killed, then insisting on being with him because of some absurd “all Wests are my Wests” philosophy? It’s absolutely baffling how often the series goes out of its way to make characters seem deep and compassionate, while actually making them daft and unlikeable. And I don’t think that’s going to change - at least not on a week-by-week basis. So while this is my last episode review of The Flash this season, I'll probably write up my thoughts when the smoke clears from the finale. For now, though, let's get into it. [caption id="attachment_80231" align="aligncenter" width="600"] 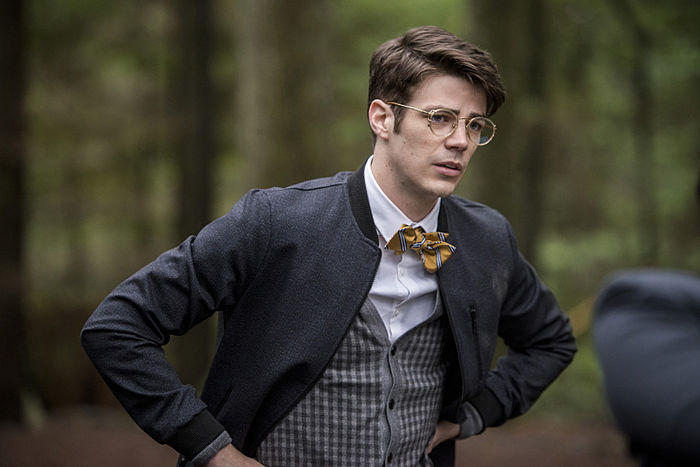 Pictured: Grant Gustin as Earth 2 Barry Allen -- Photo: Bettina Strauss/The CW -- © 2016 The CW Network, LLC. All rights reserved.[/caption] To mix things up, I’m going to start with the things I really liked about “Escape From Earth-2.” First up, the beginning. Opening with Zoom’s narration was a nice subversion of Barry’s usual speed metaphor spiel, and dare I say it, the scenes of Zoom terrorizing the city actually looked pretty darn cool. I know Zoom didn't actually need anyone's help to find Harry, but as I say goodbye to reviewing The Flash, it was nice to be reminded the show can make a visual spectacle when it wants to. The other aspect of the episode I appreciated was the development of Bartholomew's character. A lot of his characterization seemed a little predictable at first, like the showrunners simply wanted a nerdy Barry and nothing more, but I enjoyed how he was able to move past this and motivate Barry to escape from his cell. "Do you know what we did to get here, Barry?" was also a surprisingly great line, not because I thought Bartholomew's "struggle" justified it, but because it made me feel the solidarity of the characters and their experience. [caption id="attachment_80236" align="aligncenter" width="599"] 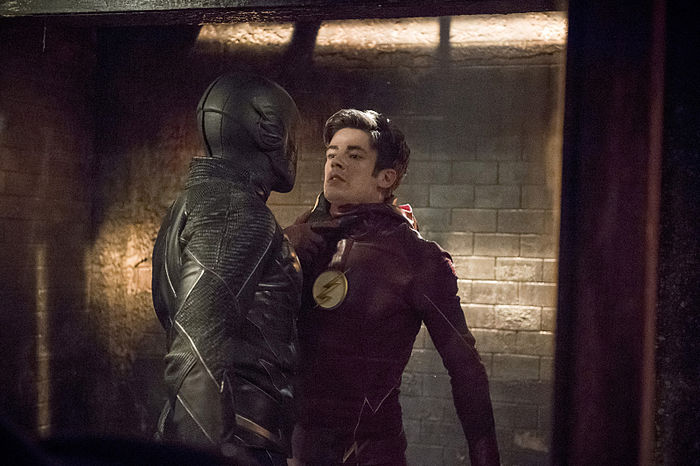 Pictured (L-R): Zoom and Grant Gustin as The Flash -- Photo: Diyah Pera/The CW -- © 2016 The CW Network, LLC. All rights reserved.[/caption] Onto the stuff that matters, though: everything else. It was funny how all my problems with the previous episode were swept under the rug with Bartholomew failing to realize he should hate Barry for stealing such important moments from him. I rambled on this topic enough in my review of last week’s episode, but I still have no idea why they allowed Barry to be the dumbest character on the show. Unsurprisingly, “Escape From Earth-2” wasn’t exempt from Barry's shocking stupidity, either. In Zoom’s lair, Barry has apparently been trying to figure out what the Man in the Iron Mask has been saying for a while, but it’s only when Jessie tells him the Man never goes over five knocks that he’s able to determine the code he’s using. If Barry was really able to rule out Morse code as the Man’s method of communication (and figure out he was using a code typical of POWs), why wasn’t he able to use basic pattern recognition to count five knocks and a pause? Not only that, but for a person who is supposedly smarter than Harry, how was Jessie not able to realize the masked man was trying to say something? It’s so frustrating how often the characters don’t act like real people in order to progress the narrative, which in this case undermined a storyline I was genuinely interested in - namely, who is this masked man? When he reacted violently to Barry saying that Jay Garrick was alive on his earth, I actually got kind of excited. What if the Man in the Iron Mask is the real Jay Garrick, grey hair and all? I’m not saying it would justify or make up for “Jay” being such a non-personality for most of the season, but if he turned out to be a bad guy – the Reverse-Flash of Earth-2, for instance – that would be kind of awesome. I mean, his doppelganger is Hunter Zolomon (Zoom in the comics), and I think every other person shares a name with their doppelganger, so there’s at least one thing he could be lying about. There’s also the fact that the masked man was in his cell for an undetermined period of time before Jessie was brought there, meaning he could have been locked up before the Jay Garrick we know rose to prominence. This would explain why people like Harry wouldn’t know the difference, but it would also mean that him and Zoom are on the same team...in which case him being taken at the end of the episode wasn’t as stupid as I thought it was. Not a rock solid theory, but a cool possibility. [caption id="attachment_80235" align="aligncenter" width="600"] 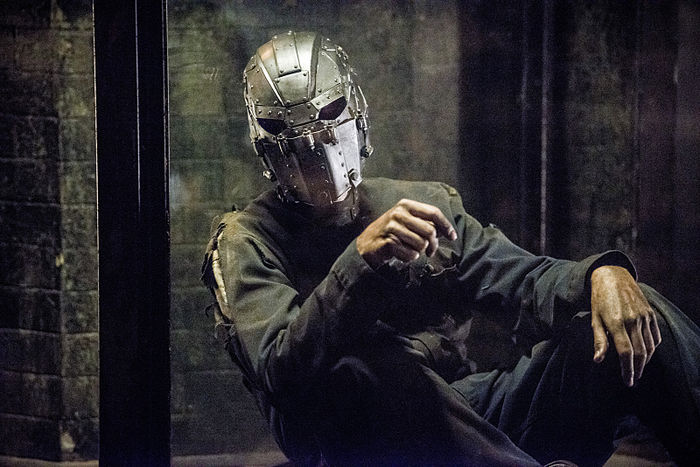 Pictured: Man in the Iron Mask -- Photo: Diyah Pera/The CW -- © 2016 The CW Network, LLC. All rights reserved.[/caption] The way the two-parter played with the narrative stakes of the breach changed from being iffy to messy. In "Welcome to Earth-2," Barry, Cisco, and Harry going through the breach caused it to become unstable, giving the characters of Earth-1 something to do and enhancing the danger for our universe-hopping team. However, it’s then fixed off-screen by Jay Garrick in "Escape From Earth-2"  before again becoming destabilized, this time through Geomancer's tremors. It was like the show wanted to keep the tension fresh, while still adhering to a strange need to have a physical connection between the conflicts of both worlds. Coming back to Geomancer, he actually would have been a pretty negligible part of the episode if The Flash didn't use another of its weird narrative shortcuts. After Jay saves a building full of people that Geomancer was about to collapse, Geomancer just appears at S.T.A.R. Labs, with no consideration for how he found them or how he got in (I thought S.T.A.R. actually had security systems in place now). It's certainly a bad sign when I'm only happy villains get defeated so that I never have to see them again, but even on his way out, The Flash managed to make Geomancer a problem. After all, Geomancer knows their names, where they're located, and the name of a metahuman with superspeed, so why would they send him to Iron Heights instead of throwing him in the pipeline like they always do? Though the potential implications of "Escape From Earth-2" were interesting, they weren't enough to outweigh the show's consistently abysmal storytelling. I realize my opinions are just that, but the series seems to make universally stupid decisions when the stakes should be at their highest. This was somewhat acceptable when the series had to contend with tie-in after tie-in, but if Team Flash's big mission to Earth-2 isn't enough to up the show's game, it's hard to imagine the season's climax will be any different. Whatever the case, I'll be there with my take on the rest of the season, but I sincerely hope The Flash works out how to avoid carpet bombing its main characters. [caption id="attachment_80233" align="aligncenter" width="600"] 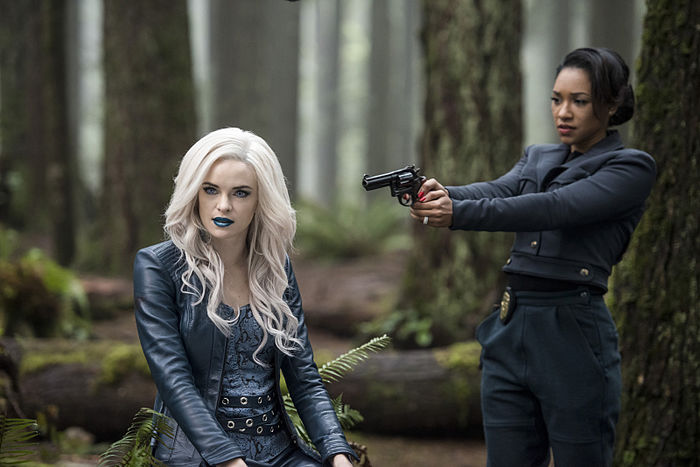