The Flash – The Fury of Firestorm Review

"Back to basics."
By: Alexander Wong | TV Reviews | October 28, 2015
There were a lot of things “The Fury of Firestorm” had to do to renew my faith in The Flash. It’s not like my confidence in the series was completely gone, but the first three episodes we had this season seemed to experience the same growing pains as the first few instalments in Season 1 (even though “Family of Rogues” did manage to turn things around after the mixed “The Flash of Two Worlds”). Thankfully, while the show still has problems creating convincing fight scenes, the showrunners managed to hit home the one thing crucial to enjoyment of the series above all else: the character interactions. [caption id="attachment_76269" align="aligncenter" width="500"] 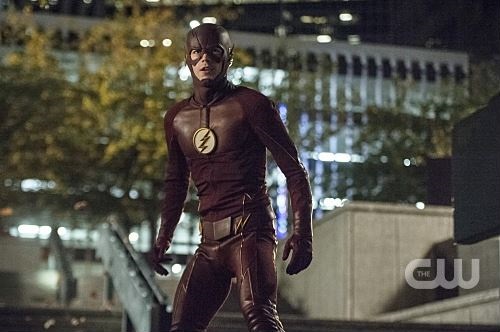 The Flash -- "The Fury of Firestorm" --  Pictured: Grant Gustin as The Flash -- Photo: Cate Cameron /The CW -- © 2015 The CW Network, LLC. All rights reserved.[/caption]   Surprisingly, Shantel VanSanten's Patty Spivot was a real highlight of the episode. I've previously written about how the romantic tension between her and Barry felt forced in her introduction, but she started growing on me in her second appearance, and now I'm completely convinced. The episode did away with the awkward humor and allowed the natural chemistry of VanSanten and Gustin to establish the potential for their relationship (rather than rely on poor dialogue). They also gave her the line, “I’m the same old P. Spivot,” which I hope is her best moment on the show in perpetuity. Candice Patton’s Iris West was no slouch, either. The show has been consistently doing right by her this season, but her dialogue and performance in this episode were particularly great. It was nice to see her acknowledge her mother in a thoughtful way, while still wanting them to have separate lives. Their next encounter did approach melodramatic territory when Iris said, “I wouldn't be able to tell if you were telling the truth or if it was another one of your lies,” but it was overshadowed by the fact that we finally know about Wally West’s existence. Due to the amount of casting news released in advance of the premiere, many have known this was coming for a while, but I can’t imagine how cool that moment was for people who didn’t know he’d be making an appearance. In contrast to Iris firing on all cylinders, Jefferson "Jax" Jackson (Franz Drameh) didn’t really click for me until his last moments in the episode. His decision to become a hero was based on some morally iffy reasoning on the part of Caitlin Snow (He doesn’t want to endanger himself or the people he cares about? Shocker.), but the brief glimpse at the interplay between him and Martin Stein, and the potential for more to differentiate his Firestorm from Ronnie Raymond’s, makes me interested to see how far along they’ll be when we next see the pair on Legends of Tomorrow. Even with Jax taking a while to be more defined, however, Caitlin was definitely the episode's weakest link. Barry, Joe, and Patty have all had particularly weak moments or episodes this season, but “The Fury of Firestorm” had Caitlin make some not very thought out decisions. I didn’t understand why she was so determined to have Henry Hewitt be the new Firestorm when Jax wasn’t exactly an academic slouch, and I thought she overstepped when she brought him into S.T.A.R. Labs and revealed their affiliation with the Flash and Barry Allen’s name. (By the way Hewitt was looking at the image of the Flash on his computer screen, it looks like something might've twigged.) In addition, the episode’s way of finally closing the book on Ronnie Raymond (for now) was muted in a similar way to how it’s been portrayed in the previous three episodes. It’s not like I wanted the melodrama come out now, but it seems like she was pretty over it before the season began. The talk she had with Barry in “The Man Who Saved Central City” should’ve spoken to this more, so we wouldn’t have had to question her grieving process. [caption id="attachment_76268" align="aligncenter" width="499"] 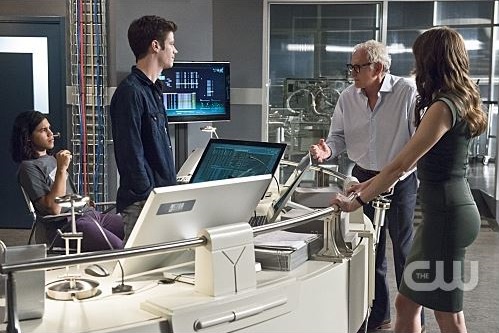 The Flash -- "The Fury of Firestorm" -- Pictured (L-R): Carlos Valdes as Cisco Ramon, Grant Gustin as Barry Allen, Victor Garber as Professor Stein and Danielle Panabaker as Caitlin Snow -- Photo: Cate Cameron /The CW -- © 2015 The CW Network, LLC. All rights reserved.[/caption] As for the villains in the episode, there’s a lot to talk about. First, Henry Hewitt (known to comic book fans as Tokamak). He felt like a villain from Season 1, for good reasons. And though I attribute that more to the confident pace of the episode than the writing, it was nice to see they haven’t forgotten how to make a completely serviceable villain of the week. However, a problematic mainstay of the series was evident in his fight scene. There was the ever-present question of, "Why don’t you just punch him, Barry?” but the set up to this was also weird, as they make it sound like they’d be able to goad him until he became so unstable that he would explode. Though this was pretty stupid, I enjoyed the fact that he made it to the end of the episode alive. And not only alive, but alive in the villain pipeline.  It seems that the dialogue I thought the writers were having with critical audience members was non-existent, or perhaps they just changed their minds about using such a morally questionable narrative device. In any case, good job, Henry Hewitt. Next up, King Shark. While I was hoping he would play a more malevolent and larger role in the series, it was awesome when Barry’s narration that we have to “grab [chances] while we can” was interrupted by King Shark’s massive hand coming into frame and closing around his head. Him being another Zoom minion immediately diminished my interest in him, but it was already so high because he was a giant shark that it didn’t even matter. Finally, Harrison Wells. I doubt he’s going to be much of a villain this time around, but I don’t think he’ll necessarily be a hero either. He’s just been creeping around too much for his own good. And we know so little about why he went through the wormhole into S.T.A.R. Labs, why he stole something (the energy gun he used to maybe kill King Shark?), and why he saved Barry. Unlike Martin Stein lighting up at the end of last week’s episode (even though “The Fury of Firestorm" turned out pretty great), I’m truly excited to see what Wells’ appearance means for Team Flash. I’ve been increasingly critical of The Flash’s inability to negotiate its moving parts this season, but “The Fury of Firestorm” proved the show hasn’t lost sight of what keeps the show engaging when everything else seems questionable. Both Patty and Iris had really great moments in the episode, and the triple threat of Hewitt, King Shark, and Wells once again demonstrated that the best is yet to come. [caption id="attachment_76270" align="aligncenter" width="499"] 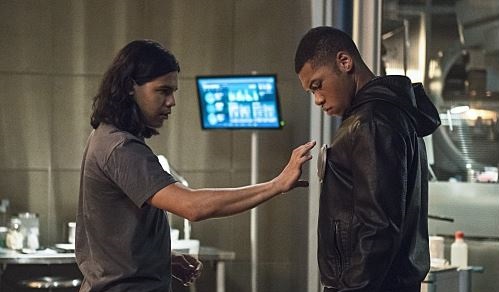