The Flash – The Once And Future Flash Review

"Great Scott is this episode terrible"
By: Anthony Punt | TV Reviews | April 26, 2017
In my review for “Abra Kadabra,” the last episode of The Flash that aired before the show took a month-long sabbatical, I lamented the dark direction the series was heading in. With that in mind, I came into “The Once And Future Flash” hoping that the showrunners would have course corrected and make the show enjoyable again. After all, they’d done it before: the last time the series came back from hiatus, it resulted in “Gorilla City” – arguably the strongest episode this season because it focused on friendship and feats of fleetness, rather than on convoluted and depressing alterations to the timeline. Unfortunately, however, my worst fears were confirmed by the title of this episode, Once again, the audience finds Barry abrogating his responsibilities in order to go mucking about with the timeline and belatedly coming to conclusions that we’d already reached (and that Barry should’ve learned by now). “The Once And Future Flash” opens with Barry doing some calculations on a notepad and reaching the conclusion that he needs to travel to 2024 in order to prevent Iris’s death by Savitar’s hand. (Why 2024 in particular? It’s never made clear and as much as anything it seems like an arbitrary date that sounds “future-y” enough.) Meanwhile, Cisco, Julian, and HR are under attack by Killer Frost, who regular viewers of the show will recall was restored in the closing minutes of “Abra Kadabra.” For good measure, KF destroys the amulet that would’ve brought back Caitlin. Flash belatedly chases after her, but is somehow unable to catch up with her. (He’s only The Fastest Man Alive, but whatever.) Team Flash wants to go after KF and save Caitlin, but Barry has the capitol idea to leave for the future immediately even while a dangerous metahuman is on the loose. It’s not made clear why Barry feels such an urgent need to leave for 2024 – after all, the future will still be there. The only reason to have Barry leave his friends in the lurch is to have him “learn” not to do that. It’s circular plotting at its worst. 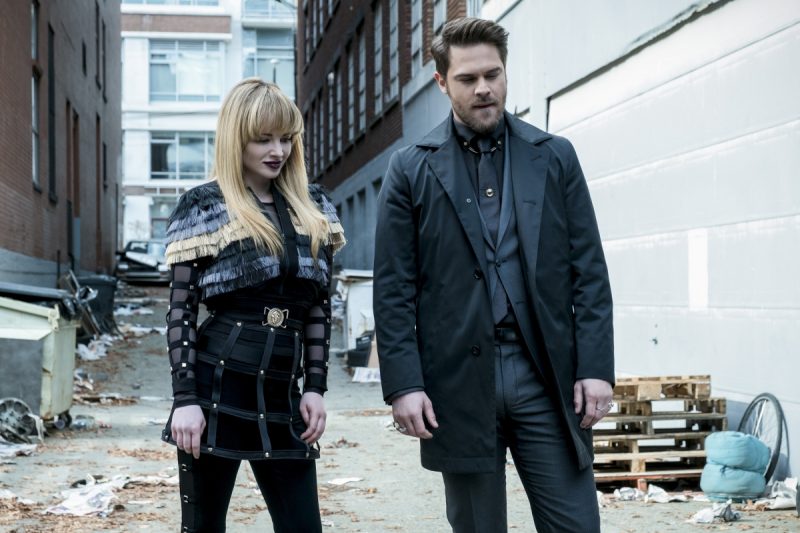 In any event, the Flash goes back to the future and immediately encounters future versions of Mirror Master and the Top. Neither of them look or act appreciably different from their 2017 incarnations, save for the fact that the Top is wearing some garish getup with bondage straps. The rogues remark that they hadn’t seen Flash in a while, which (along with the general dilapidated condition of Central City) implies that the villains have had the rule of the roost for a while. MM and the Top kick Flash’s ass pretty handedly until he’s able to escape. From there, Barry visits the apartment he shares, or rather shared, with Iris, and it too looks like it had been decimated in some apocalyptic battle. Other familiar locations like STAR Labs look similarly destroyed, as if the set designer for this episode thought all dystopias lack for proper housekeeping services. Barry then encounters Future Cisco, who is considerably more stately in demeanor than the present-day incarnation. In addition to losing his trademark wit, Future Cisco is also missing his arms and hands after losing them in a battle with Killer Frost. Somehow this means he’s unable to use his vibing powers, which is strange given that the audience was never led to believe that he needed his hands to use his vibing powers before. It’s not like he was a speedster who’d lost his ability to run after his feet were cold-amputated. Be that as it may, Future Armless Cisco takes Barry to meet his future counterpart. Future Barry shares his tale of woe after failing to stop Savitar from killing Iris, which led to the dissolution of both Team Flash and his own self worth as a hero. But it’s hard to take his grief seriously because Future Barry has such a ridiculous, early-to-mid 2000’s era emo haircut that it’s hard to focus. It’s also hard to like this version of Barry – let’s call him Future Emo Mopey Barry, or FEMB for short – because he elected to wallow in his self-pity, neglected his friends and presumably let Central City go to shit because of his grief and guilt. 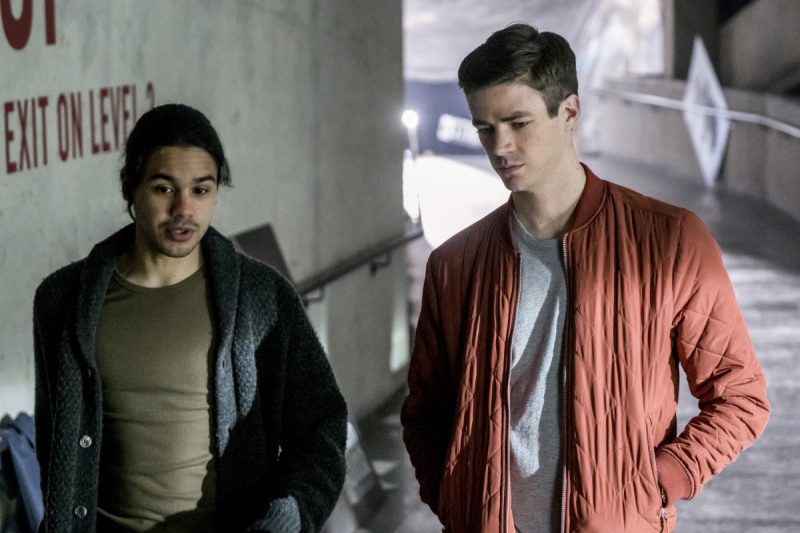 But then again, it’s not like Present Day Barry is much of a prize. After all, it seems clear that his selfish action to leave Team Flash to their own devices in capturing Killer Frost helped lead to the Darkest Timeline in which Cisco lost his hands, Wally is a catatonic paraplegic, and so on. All he has to do to repeal this timeline is to go back to the point that he just left and change things for the better. However, the plot requires Cisco, who’s supposedly a genius-level intellect, to be stupid and selfish enough to keep Barry around. So does Barry make good use of his time in the future, at least? Well, he does visit Future Killer Frost in Julian’s plush containment cell because she knows who Savitar is under the mask. But she isn’t telling, nor does FEMB or any of the former members of Team Flash know. The showrunners continue to play coy about the Savitar mystery but they may have miscalculated the level of audience interest. We have so little to go on in terms of Savitar’s motivations that it’s hard to figure out why we should care about him (or her). And unless the Savitar reveal is suitably surprising and/or impactful, the whole plotline is bound to be a huge letdown. Barry’s attempt to get intel about Savitar proves fruitless, but the episode writers try to justify his presence in the future by having him reunite what remains of Team Flash to take down Mirror Master and the Top. (In a somewhat cruel moment, Barry whisks Joe from Wally’s bedside while also neglecting to include his former protege.) One of the episode’s few bright spots comes when the rogues use their powers in unison to create a Doctor Strange-esque visual effect in which the surrounding buildings seem to be collapsing in on him. Future Cisco is able to whip a doohickey that counteracts the combined effects of their powers and FEMB puts on the Flash costume to deliver it to Present Day Barry. Curiously enough, FEMB’s costume is of a brighter red than the 2017 Flash – you’d think it’d be the opposite given their respective circumstances. After a desultory fight with the two rogues, Future Barry (who still has the emo haircut but is now decidedly less mopey) gives Present Day Barry a lead to help him capture Savitar. It might’ve been helpful to receive that information sooner, but when you’re a speedster the past is always in the future. If only I were a speedster too...I sure would’ve liked to have the hour I wasted watching this episode back.
Rating
4.5
Pros