With the first big milestone of “The New 52” under way, the big crossover known as "Trinity War", and with a certain Direct To Video DC Animated Film on its way out at the end of the month it seems like a good time to talk about another crossover. The one that, for better or worse, started it all. No, not the beloved Crisis On Infinite Earths, but a look back and an attempt to piece together the mess that was Geoff Johns’ Flashpoint.

Now if one thing is for certain is that debates on the quality of this miniseries event tend to get very heated and very divisive. Of course this will always be the case, and be not without aspects of bias, because of the nature of the event – that it effectively ended and wiped out an over 25 year old continuity. Not only that, which by itself would be enough ammunition to fuel contention for years, but also aided in ending it in the most slap-dash way possible – with finale arcs being rushed out for the most part being a very unsatisfying farewell to a well known comics universe. I must admit, however, before we move on that I am amongst those that admonish the quality of the story, but not for the reasons that most do.

The thing that should be noted when discussing Flashpoint first and foremost is that the story was never intended to become as big as it did. It was never meant to become this big COIE-style event, it was meant to just be a crossover within The Flash series, comparable to Blackest Night but no more and no less. Geoff Johns had plans that lay after Flashpoint so intending it as a reboot would have been detrimental. Yet they needed, for one reason or another, to have an excuse to reboot and so retrofitted the fledging miniseries to suit that very purpose. With all the dexterity and skill of trying to customize a Hummer to run on AAA Batteries no less.

That is my main point of contention with the event, because it not only ruined what could have been a serviceable, if average, alternate universe story into a rambling nigh-incoherent mess. The main five issues being reduced to nothing but showcases for either things that were still in planning for the yet in-development “New 52” or endpoints for emotional beats that had no ties. The latter part being the result of the extension of Flashpoint’s grasp – for it to be a proper “event” it needed a lot of minis to create a façade of pomp and grandeur. Therein creating the biggest problem of all – making a single arc with some tie-ins into a 50+ issue extravaganza. A small story became a ridiculously bloated narrative that was supposed to reboot an entire universe.

By bloated narrative this is not to imply that all 50+ issues were essential to the story, not at all, most of them were pointless and inane write offs that only cashed in on the Flashpoint banner to give them any sense of importance. Their only real use was in bogging everything down, and doing so in a way that obscured and shifted out of focus the tie-ins that actually mattered. Going back to aforementioned emotional ties that were without a home in the main series – their real development occurred in 3 or 4 other minis – to the detriment of both. Without any semblance of the events that occurred in the necessary minis, for example Project Superman, Wonder Woman and The Furies, or Hal Jordan, then the endpoints that they receive in Flashpoint proper have no emotional weight or depth. And what is a story that has no emotional weight? 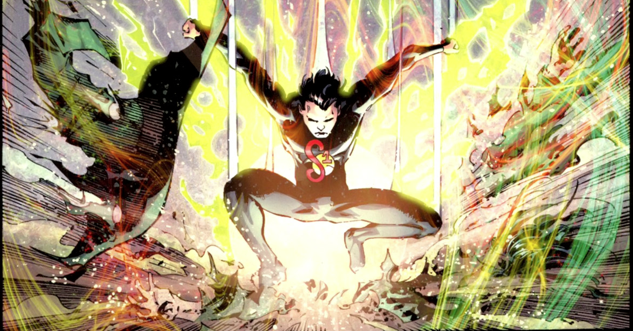 Without that essential aspect then the most valuable and actually good sequences from the whole debacle lose their rhyme and reason, since in order for them to have that in the first place the reader would have to know what minis to scour for and then discover a readable order – which given how things intersected and more often than repeated during Flashpoint was near impossible. So, without their respective tie-ins, the arrival of Superman in Flashpoint #5 elicits no joy, the death of Hal Jordan in Flashpoint #4 begets no empathy, and the entire damn backstory of the event – the war between Aquaman and Wonder Woman – means nothing. It matters little more than an odd occurrence. When everything that gives your story substance and meaning is divorced from the main storyline in such a way then something has gone terribly wrong.

That is the uphill struggle that the upcoming adaptation, titled Justice League: The Flashpoint Paradox, will have to face. It already looks to be a competent translation of the main series, notable sequences of which are in the forefront from the most recent trailers and clips, but it will also need to include the missing pieces of the puzzle. The movie needs to have those, and there is simply no other option, if it wants to actually be a story that goes somewhere – that has semblance of impact – then the consolidation of the various essential minis is a necessity. The worrisome aspect is the ever so small running time that WB gives their DC Animated Films, even those that are actual features and not simply shorts. It might not be enough to salvage the story in some form or another – because there does lay a good story at the heart of Flashpoint, it is just buried six feet under. In the end this upcoming release will probably be a serviceable adaptation, but be doomed to be just as superficial as its foundation, but I hope for the best – because the story needs saving. 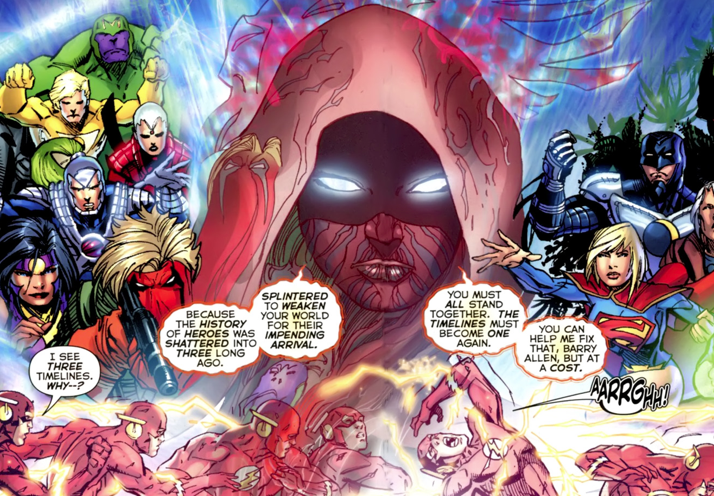 The biggest crime against this singular story that was committed by turning it into a reboot engine is that, in the end, it destroys even The Flash’s emotional character arc and the entire purpose of the story in itself. The Flash’s whole drive is to return things to the original timeline, to be reunited with friends and family. Yet, due to the intrusion of The New 52, he ends the story as a failure. There is no emotional resolution, there is no closure, no farewell, and The Flash simply fails. He returns to a universe where nothing in the story mattered, the story that featured a father who sought redemption and another who needed to accept the fate of his mother, and things are quickly forgotten. The insulting thing is that the two-page spread that was the catalyst for The New 52 and which introduced Pandora to the DCU was so shoehorned in that one could literally excise it and the flow would not be disturbed at all. For the want of a reboot, the series ends dourly – especially now, in retrospect.

It’s a tragic set of circumstances the series of events that befell this book. It was destined to fail, and so it did. The worst part of all was not even realized until last Wednesday (July 3rd) even, as the event was finally shunted from continuity and put on the retcon pile with the advent of Trinity of Sin: Pandora #1. It serves as a grim warning for other events and even small story arcs that could be trumped up as something bigger. If any who read this think that I took too mild a tone with Flashpoint, or whatever the case may be, it’s that while it had it’s many terrible aspects at its heart it wanted to be a good story – and so deserves some new understanding. It was a victim and not the perpetrator some paint it as. With that I wish The Flashpoint Paradox the best of luck because it will need it.