You know what’s better than one opinion and one earth? Multiples! Flashpoint is DC comics big summer event, the equivalent of their summer blockbuster movie and since it’s a book that is supposed to change the world of DC comics forever, we’ve taken a look at the first issue and added our thoughts and comments on it for Flashpoint Friday! If you’ve read the first issue we encourage you to leave your thoughts, if not be warned that there will be spoilers!

Written by GEOFF JOHNS; Art and cover by ANDY KUBERT

Not a dream, not an imaginary story, not an elseworld. This is Flash Fact: When Barry Allen wakes at his desk; he discovers the world has changed. Family is alive, loved ones are strangers, and close friends are different, gone or worse. It's a world on the brink of a cataclysmic war – but where are Earth's Greatest Heroes to stop it? It's a place where America's last hope is Cyborg, who hopes to gather the forces of The Outsider, The Secret 7, S!H!A!Z!A!M!, Citizen Cold and other new and familiar-yet-altered faces! It's a world that could be running out of time, if The Flash can't find the villain who altered the time line! 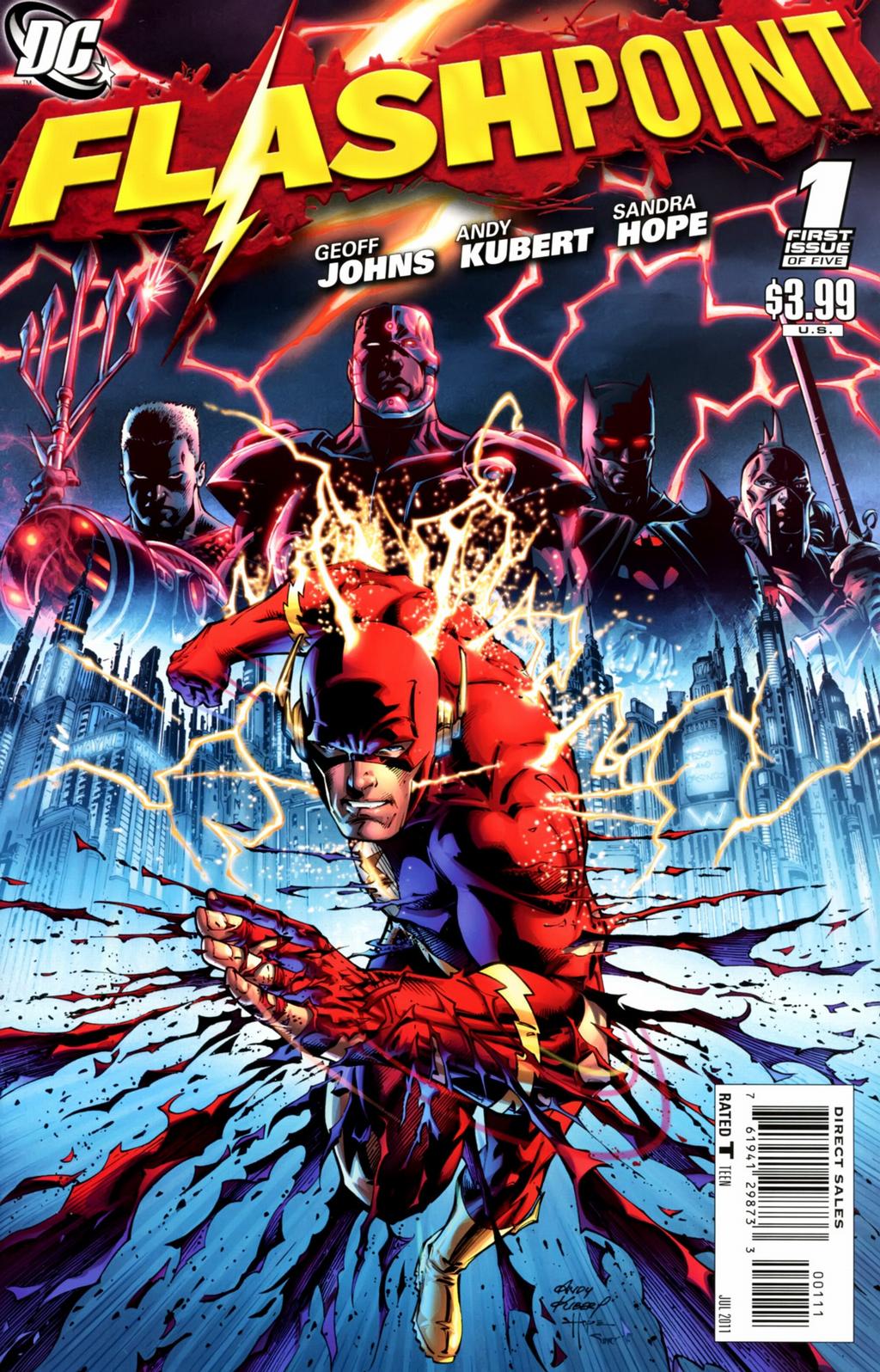 Kevin:  Flashpoint #1 kicks off the start of a high octane thrill ride that will change the DCU forever.  The first issue did a lot of things right. It took care of all the plot points immediately. He’s the world, here’s what’s going on and that’s it. Not only that, it gave the reader some awesome version of their favorite characters. The Shazam kids were a personal favorite.  But the real highlight of the book was the way Barry took it all in. Without his powers and his comrades to aid him, he was vulnerable. I really want to see what happens next.

Dustin: Flashpoint ends up being a well-balanced issue filled with its share of good and bad moments. I’m very glad that it hasn’t started like previous events with the first issue having a huge impact and then the series fades into mediocrity towards the conclusion. With the first issue it already has a slow burn, which could be a very good thing. The good of this issue is mostly Barry. He doesn’t run around telling the world that they’re all crazy, instead he’s smart enough to know he should keep his mouth shut and put on his detective hat. I do have to say that I saw Thomas Wayne coming, not from a mile away, but it became apparent. Really anyone who was expecting otherwise doesn’t get that everything has changed in this book. Wonder Woman is not going to be Princess Diana; Aquaman is not going to be Arthur Curry. This is a world that has had all those familiar elements removed. Shazam! is evidence of that.

So what’s good and bad? For one the mystery.; we don’t know how Zoom changed the past so that he still exists and the afore mentioned Shazam! is one of the coolest ideas to come from DC in a long while. The bad? That annoyingly long roof top scene that’s only function is to introduce all of those characters and no Zoom. We know he’s behind it and all we really needed was one quick moment with him in the background or just sitting somewhere not lightning. Just to let the audience know he’s the Duke of New York A number one! And if it turns out he’s not behind it then it’s a great red-herring. That’s the main grip about this mystery so far is that it’s only on the surface, there’s really no deeper mystery to figure out yet. But it’s way better than Fear Itself! 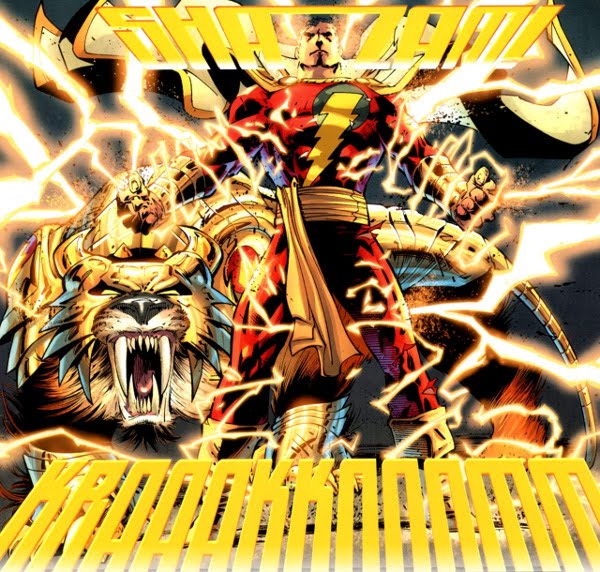 Neil: Events season is here and what better way to kick things off than with Flashpoint #1.  DC Comics event for this year starts out with a bang, but for some reason when I finished the book I felt so overwhelmed that I could not help but feel a little bit concern that five issues of this event might not be enough.  The story starts out quick and with a lot of explaining of the events that are transpiring around Barry Allen (Flash) , clearly the time stream has been altered and the only person who knows that he is out of place is Barry.

In the first issue the story some real heavy things are established.   Wonder Woman and Emperor Aquaman are in an all-out war, Superman apparently does not exist and lastly Batman is not who you really think he is and he is even crazier than usual.  All things which are shocking yet really good for the story because for the first time in a while DC’s big three are not really entrenched in the story as main characters leaving  B and C list characters to do all of the heavy lifting.  All of these things are huge to the book, but the most shocking of all this is that Barry has lost his powers and is not scarlet speedster.   When I read all this I said. “Whoa! This is really happening!”, but in my mind I was still questioning why it was happening, who is involved in all this, and why is Barry without his powers?   I am sure as the events continue I will get these answers, but to tell you the truth I couldn’t shake off the overwhelmed feeling I had from this book.

The introduction of almost all the players of this story was cool but also concerning. By showing all these characters this book screamed tie-in galore just to get the complete experience of this event. For example the book showed us that a group of kids joined together to form Captain Marvel (or as I like to call him Shazam!), or Abin Sur is still a Green Lantern and Captain Cold as a good guy?  I mean there is a lot of stuff going on and just reading the main title is not going to be enough.  Now the art of the book is just beautiful.  Kubert brings his A-game to this book and the art looks crisp and beautiful, the page with all the characters meeting was stunning.  The colors are vibrant and the ink is tight.  In this area I really have no complaints. Although overwhelming, I feel that the book is off to a great start, and a lot of cool ideas were planted for us readers.

Jorge: Flashpoint aka Barry Allen woke up in a DC Twlight Zone, started a bit slow as an elseworld that involves the current Flash facing a strange alternate reality. Ok its a Twilight Zone episode in a DC setting its not really new because DC does this all the time, with elseworlds or even the main titles like JLA. Hell... They have 52 different worlds. Its a good thing that they choose Flash as the main character since he is my favorite character, but Barry Allen came back from the dead not so long ago and now he is the star of a time twisted, paradoxical main event? Give the guy a break he was dead for like... 20 years. Frankly they are moving to fast with the Flash, which is kind of ironic.

Also its about time DC put Andy Kubert on something. The art looks good but has not evolve too much, playing it safe for his fans. Its a good thing that they are putting top talent on this mini series, but Flashpoint is a 5 issue mini that puts him in a very complex situation and from the looks of it, we might be forced to buy all the tie-ins, to really get the gist of the story. This series needs to show why is going to be so epic because so far they haven't done anything different from a self contain arc from JLA or even the Flash's own book.

There you have it. The second issue is nearly upon us and you can bet that we’ll be back to talk about it, but we’ll give you enough time in between so as not to spoil anything too soon.