By: | Comic News | February 25, 2011
DC Comics got to sit down with artist Andy Kubert and talked about his job on Flash’s new series. Flashpoint will be shaking all the minds and hearts of both characters and readers. With the writing of Geoff Johns and with Andy’s drawings, get ready for the newest, and probably one of the greatest, DC Comics stories! Get ready for Flashpoint #1 later this year on May 11th.

DC Comics: FLASHPOINT is an epic storyline and a huge undertaking. How did you become involved in the project? How long has it been in the works?"

Andy Kubert: As I was wrapping up the Batman “Whatever Happened to the Caped Crusader” 2-parter that I did with Neil, I had asked Dan Didio if he had anything in mind for my next project. I had told him that I really wanted to do a Flash project someday. Flashpoint was in its infancy (there wasn’t even a title at that point), and there were really no details at all, except that Dan did say (with this gigantic smile on his face) that he had a huge Flash project on the horizon and I could do it if I were interested. At that time, I didn’t know the storyline or even who was writing it, but I said yes right away. I really trust Dan’s instincts. 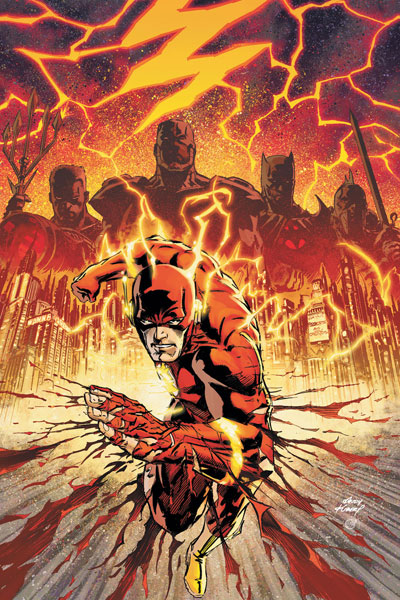 It’s funny…Geoff and I have always said that we wanted to work on a project together at some point before this ever happened. I had no idea he was involved with it, and I think when Dan offered it to me, Geoff didn’t know I was going to be involved with it either. I flipped when I heard he was the writer!

We started working on character designs late last spring and it took a good few months to get those going. There were a lot of characters to redesign and we had to coordinate them with DC Direct and all the people involved with that. Sounds simple with re-designing, but it’s not. There’s a lot of thought, sketches, ideas and themes tossed back in forth with everyone involved. You don’t just push a button and out comes a redesign.

DC Comics: What is it like working with Geoff Johns?

Andy Kubert: He’s an awesome collaborator. We bounce thoughts back and forth not only when the scripts come through but also with the art. I send Geoff every pencil page I draw looking for feed back from not only him, but Eddie Berganza, Adam Schlagman and Rex Ogle. It`s the way I love to work. Everyone is in communication and involved.

I also gotta say that Geoff’s scripts are intensely thought out but are open just enough so that I don’t feel cramped. They’re a pleasure to work from and things just flow. I’ve mentioned to him that his pacing is incredible. He’s got a great handle on that. I don’t think this will be our first and last project together.

DC Comics: Who is your favorite character to draw?

Andy Kubert: I can’t pick one! The toughest re-design was Cyborg, and what we had finally came up with I was very happy with, especially when I saw the sculpt for the toy. He’s a lot of fun to draw! Batman, as always, is a blast but I’m handling him a bit different than I did when I drew him when I worked with Grant. Of course, The Flash is iconic and a blast too!

One of the fun parts about re-design is that you get to make the character the way you want while keeping them in the parameters for the story. I love drawing knights, armor, and helmets. That was a perfect fit for me and Flashpoint Wonder Woman.

And wait till you see Superman…

DC Comics: What’s the biggest challenge on working on a big project like Flashpoint?

Andy Kubert: The scope and magnitude of this project is pretty intimidating! I’ve done a few huge projects in my career, but this one is like drawing and creating a blockbuster movie epic. It’ really expands your horizons and thought process as to how far you can run with something if that makes any sense.

DC Comics: How hard has it been not talking about the series for the past year?

Andy Kubert: As a lot of people know, I teach and work at my father’s art school where I have an office and studio. Everytime I go into class or walk down the halls, I get peppered with questions from students about Flashpoint! I just look at them and laugh and either say I can’t answer or just make something up to get a reaction. Then say I was only kidding! It’s been a lot of fun! Usually I tell them to go read the Sources’ Flashpoint Fridays cause they’re not going to get anything out of me

Well, that is it with the interview. Be sure to stay tuned when Flashpoint gets closer to its release date!