You know life sucks when wake up to find that your only means of transportation is stuck up in a street lamp, ten feet off the ground. That’s the kind of crap day that Eddie Patron is having. As he walks back to his apartment in the projects, he is greeted by his ex, Danielle, who happens to be floating a few feet off the floor. She then begins to express how disappointed she is by laying a full blown ass-whooping on Eddie. She throws him through walls, knocks him through a window, snatches him through ceilings and flies him above the clouds just to torture him. The reason for this ex-lover spat: Eddie’s been running and hiding from Danielle because he’s got something valuable, something that she wants. After Eddie tells her that she’s going to have to kill him first, she reinstates from the before mentioned ass-whooping. Just as Eddie is about to black out he recalls when they were truly in love, when they first met. From their wedding to their first night together to their days in high school.

Eddie remembers when the two of them were in high school and had first met. Eddie discovers Danielle when he finds her crying behind a dumpster. Within seconds she shares with Eddie her issues at home. He comforts her and cheers her up by getting her to hang out later with some friends.  Meanwhile, an unpopular student by the name of Francis is being harassed by a trio of bullies. Before they can beat him up, he unleashes a well placed kick to the nuts on his aggressor and manages to flee. Turning a corner Frances runs into Eddie and pleads for help. As the bullies attempt to persue Francis, Eddie covers for him and saves Francis’s ass.  As a reward for his kindness, Francis invites Eddie over to his house for a beer and a hit of a new drug called “Fly”. 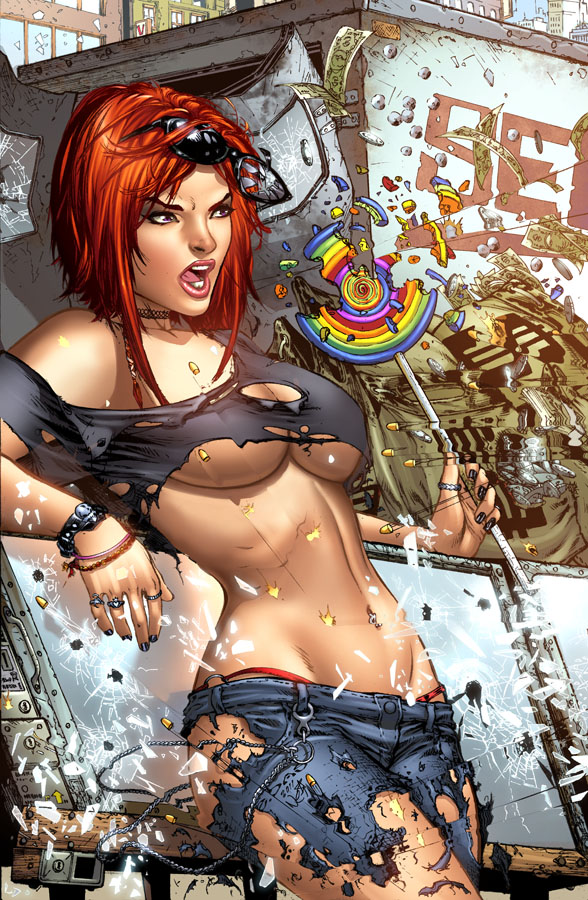 First off, cover A/retailer incentive from Eric Basaldua and Nei Ruffino is amazing. Damn near worth the purchase alone. Okay, now that’s out of the way, let’s continue. The narrative that Raven Gregory (Myths & Legends) is attempting in Fly isn’t too original; super powers in a bottle (the concept reminds me a little of Warren Ellis’s No Hero) but the way he’s going about is very intriguing. Eddie seems like a nice enough guy, can’t trust Francis, he goes through people’s property and Danielle loves drugs and punching people; so far, so good. Once this story gets some solid traction and digs in, this could shape up to be one hell of a ride.

The art from Eric J, starts off in gritty, dark and intense way which matches the book’s dramatic opening. Later when Eddie goes into the “flashback mode”, the art in the book changes to a manga, Japanese-ish style with bright colors. This came as quite a shock at first, but then you realize it represents a happier time in both of their lives. So yeah that works.

Overall, Fly has the tools, abilities and a chance to make a great and solid story. Let’s hope it can go all the way and then the book can really soar.

Overall Score – 7.7/10
*Good - A solid book overall, might not be for everyone but does have a fan base and they will definitely enjoy*