Forever Evil #1 – Review: The World Is Theirs

Well, aside from some issues that we will get into later, it was a more interesting beginning to this story than “Trinity War” was throughout its entire run. The set-up is built up fast, clear, and a lot of different plot threads are thrown out in their appropriate cases. To sum it up – it was a good first issue, relative to an event of course. Most of these plot threads are going to be seeded throughout the various tie-in minis and arcs, that is only to be expected, but the main conceit stays in focus and doesn’t get lost in the shuffle. That is perhaps the main thing that one has to give this, speaking solely from the perspective of an event comic. It’s very easy for that to happen.

Now, as for the main story, it’s necessary to put this sort of series in the right frame before tackling that area on. Geoff Johns excels in writing characters of several sorts – those that he deeply cares about, villains, and the b-listers. Forever Evil, for better or worse, concerns all three and it shows. As stated above the majority of plot threads for events are taken care of in other places. The main book only needs to concern itself with the broad strokes of things. The pleasure of Johns is that the broad strokes of Forever Evil are incredibly simple, which allows him a great amount of maneuverability. Maneuverability that he uses to fill up the time creating great little character moments, made even more enjoyable due to the fact that he loves these characters. It’s a known flaw of his, but in this case it’s an advantage. Lex Luthor, and the other main characters of Forever Evil, are all characters that Johns really enjoys writing and as far as this first issue goes it definitely shows he still has the knack. 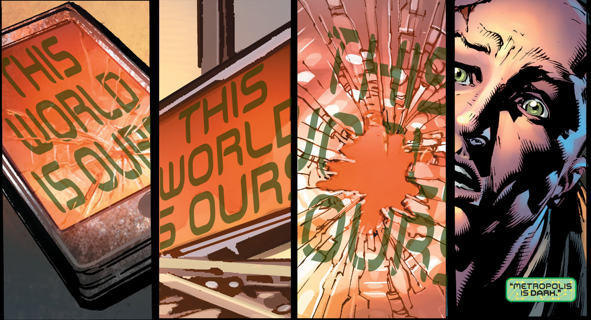 The opening and ending sequences with Lex Luthor showcase his appeal as not only a villain but as a character in his own right. Displaying the harsh, bitter, and cynical aspects along with the sympathetic heart that lies side by side to it. These sequences also perfectly set-up Lex Luthor’s transformation into our protagonist, which is something many are eagerly awaiting from this series. Other not yet fully realized characters get their moment in the sun to shine as well. Including, but not limited to, Captain Cold, Johnny Quick, and Black Manta. One cannot fault on Johns’ set pieces here. They are fun, quick, and to the point. These characters are among our main individuals, but their little character bites leave you wanting more already.

Given that most of them will branch off and join Luthor, their interactions – similarly to Johns’ JLA – are another feather in this book’s cap. Speaking of Johnny Quick, the Crime Syndicate also gets their fair share of sequences. Their origins and ambitions have not yet been explained but their “whole deal”, so to speak, does. Ultraman in particular, right off the bat as it were, quickly spotlights the parallels and the dissonances between himself and the Man of Steel in some very eerie and amazing pages – leading to the issues exciting conclusion. All in all, in a story sense, there’s not much there – but there doesn’t have to be. As long as it is a fun ride, and all points indicate to it being so. Johns has the ball in his court, if he messes up blame can only fall on him.

Though to be fair, he was not related to any sore spots in this issue, that honor fell to artist David Finch. Finch, who has been working on this since he was pulled off of JLA months ago, provides some of the most bland and mediocre work that he shelled out for DC in years. Given the head start he had received one would expect a little more in way of draftsmanship, dynamics, and even anatomy. Finch’s work is serviceable enough to convey the scene and what is happening in general but that’s all. It lacks no internal flair and given everything a very flat feel and tone, but other than a few panels – there is nothing to really decry as “terrible”. It’s lifeless and ruins several pages that could have had impact. So, on that end, the issue fails.

Overall this was a very charming, exciting, and enjoyable start to an event that, whether we like it or not, is going to be with us for the better part of a year. I have faith in Johns to produce some great villain work in this series in terms of beats and interactions, but this is the "New 52" - anything is possible, including failure. I eagerly await the next installment and hope that from here on in there is smooth sailing. It's the Legion of Doom versus the Crime Syndicate, how hard can that be to mess up?