Here’s something you don’t see every day: Free DLC! Epic Games has just released the “Versus Booster Map Pack” for Gears of War 3, which contains five multiplayer maps. Two of the maps are actually new: Bullet Marsh and Clocktower, while the remaining three--Azura, Rustlung and Blood Drive—have already been released in the previous “Horde Command Pack.”

The map pack is a result of a partnership between Epic and Paramount Pictures, who are promoting their new film Mission Impossible: Ghost Protocol. A new “Impossible Mission” has been added to Gears of War 3, a contest where players can win an exclusive “Mission Impossible: Ghost Protocol Weapon Skin Pack.” To win, players must watch the trailer for Mission Impossible on Xbox Live, then complete Gears 3 on Insane mode before Dec. 25. The Weapon Skin Pack includes Ghost Protocol-themed Lancers, Gnasher Shotguns, Hammerbursts, Retro Lancers and Sawed-off Shotguns. Other prizes will be available for those who enter the contest but fail to complete the game on Insane. Those who have already beaten Gears 3 on Insane will automatically receive the weapon pack on Dec. 31. 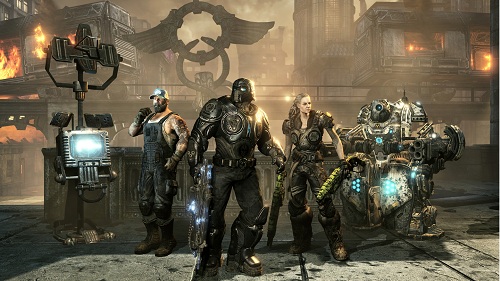