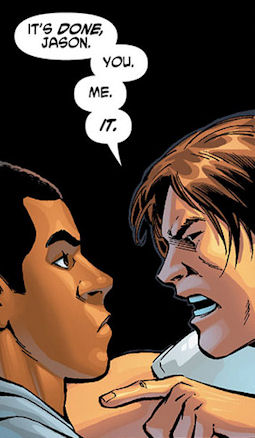 Somehow, I don’t think the impression DC wanted to give with this zero issue is that Fury of Firestorm is drowning in desperation at this point. But I don’t know what else to take away from this. Okay, maybe that is not entirely true. There is probably one other impression I can take away from this. But believe me, it is not positive either.

Jason Rusch and Ronnie Raymond have returned to their old lives. How? I have no idea. This series started with the high school being attacked, several dying and Jason and Ronnie being suspects in it. So that must have all blown over between issues. It’s like nothing ever happened now. That isn’t exactly great storytelling, but I imagine it is a necessity for where DC wants to push this book.

On top of that, there is still no mention of Tonya. Did she die? I guess she died and the duo are over it already. Yeah, yeah. I know it has already been made quite clear that this particular subplot has been abandoned, but the return to their old lives shines a new light on it.

Getting past the unbelievability of Jason and Ronnie falling right back into an old status quo, the premise is that the two have been dealing with the loss of their Firestorm abilities in different ways. Jason has trouble accepting their gone while Ronnie is more than happy to forget about them and all the trouble that came as a consequence of them. To be fair, these stances do fit their respective former FIrestorms. Though obviously, the powers aren’t gone. There’s really no suspense on that note. We are shown immediately that they have not gone back to normal.

I’m not sure what to make of the new dynamic Jason and Ronnie have. They aren’t friends, but they are. How’s that? Ronnie even has Jason doing some homework for him, which seems like a total betrayal of Jason’s character. It’s not even an equal trade situation. Jason just does it, as if he has become Ronnie's loyal sidekick. The Jason Rusch from the beginning of this series would never have stooped to doing Ronnie’s homework like this. This is some serious diminishing of Jason and his role.

Much more on this note in a second.

This has to be a really rushed effort from everyone involved in the book. There can be no other explanation for the quality of this story. Everything about it reads as shallow and forced. You have these two back to their old lives with no explanation. Their dynamic is a high school cliche that doesn’t hold true to the personalities that have already been established. We get a completely random return of a villain from earlier in the book, and it’s whole purpose is just to provoke some standard superhero action. I can’t believe anyone’s heart was really in this issue, which isn’t really even a zero issue by the way. This reads as issue thirteen.

DC even abandons trying anything new and goes right back to the old Firestorm.

And that brings me back to the betrayal of Jason Rusch.

Once again, DC has put Firestorm back in white-face.

This was a major, major problem I had with Brightest Day, and something I don’t think got as much attention as it should have. Back then, DC went through some absolutely ridiculous hoops and contrivances for the sole purpose of keeping a white face on Firestorm and regulating Jason Rusch to the unseen head-voice role. That was seriously screwed up and offensive. Fury of Firestorm doesn’t go to that awful extent, but it does go for the exact same result.

Keep in mind. However weakly, this is DC’s attempt to save this book. To fix it and stave off cancellation. What is their solution? To make the white guy the star and push the black guy into a lesser role. That is the apparent game plan here. Fury of Firestorm began with a great premise that put them in equal roles, which made perfect sense. They’re unique characters and unique Firestorms. Ronnie’s strengths rest in the action aspect of being Firestorm, and Jason’s strengths are in the more complicated applications of being Firestorm. Easy! Or it should have been.

This is an offensive, backwards step on DC’s part. The New 52 has already been rightly criticized for being more concerned with securing the positions of its white male characters while claiming progress on diversity. Hey, who did Cyborg replace as a Justice League founder? It sure wasn’t one of the white guys. Now, DC pushes back one of the few non-white characters it still had in a starring role. And please, don’t try to tell me Jason will still be as much of a star as he ever was in this book. I don’t see him on the cover.

It would have been better for DC to just have cancelled this series.

You know they will soon anyway.
Rating
1.9