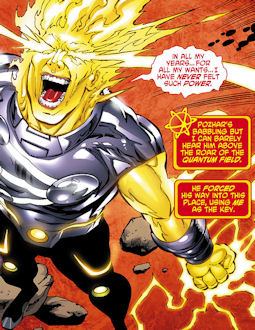 It isn’t pretty, but Joe Harris and Yildiray Cinar do what they have to do to wrap up the convoluted mess of a plot that Fury of Firestorm: the Nuclear Men has built up over the past year. It doesn’t go as far to actually salvage what could have been a great book, but it does open the door to the possibility that something interesting could still be done with Jason Rusch and Ronnie Raymond.

In my previous review, I said what Harris really needed to do with this book was to clear the deck of the ridiculous assortment of Firestorms that the series had gathered up. I’m sure Ethan Van Sciver and Cinar had fun design and drawing them up, but they were a horrible drag on the story. Their presence drowned out the core concept of Jason and Ronnie as the stars. They reduced the very concept of Firestorm into something that could be mass produced. With all of the Lantern Corps in one of DC’s most popular franchises, the last thing the universe needed was a Firestorm Corps.

Like I said, it’s not pretty. Nor is it particularly satisfying. But the board does get cleared of the Firestorm Corps. Don’t get me wrong. Tying Firestorm into a variation on nuclear proliferation was a clever idea. Nationalistic, carbon copies of Firestorm just was not the greatest way to go about it.

It probably goes without saying that this was not a fantastic conclusion to the story the series had been building up for months. To be honest, I long ago lost track of what the story here was even supposed to be. There are FIrestorms everywhere. Pozhar has gone into full megalomaniac mode for whatever reason. I don’t know. But Harris wraps it all up neatly as though he was mandated to, which I expect he was. Harris goes all Scorched Earth on the plot here, burning away everything he can of the ongoing plot in order to reset Jason and Ronnie’s status quo.

It’s pretty painfully obvious that this was not the intended end for the story. Pozhar was clearly meant to be a far more complex character than the one-note power-mad maniac he ends up here as. Zither too clearly had layers to her character, but we do not get to see under the surface for her either. We never did follow up on the Hyena’s mercenary unit and the very obvious setup for a new Killer Frost. So yeah, there is a very clear disconnect between what was happening at the beginning of this series and where the story ends up here.

Probably the best, most consistent thing about this series has been Cinar’s art, which continue their good quality in this issue. The man’s a damn good superhero artist. It’s as simple as that. His time on this book is coming to an end, and DC would be wise to line him up for another of their books.

It seems that Harris will be writing next month’s #0 issue, and that he and Cinar will then be the latest creators to leave this series. It sounds like the issue will be an aftermath issue that tries to set up the next run, which will be by Dan Jurgens. Am I optimistic? Not really. I’ve liked some of what Jurgens has done in the past, but his track record with the New 52 thus far has not been promising at all. Green Arrow and Justice League International? Ouch. Plus, it will take a lot of work and good ideas to pick this book up out of the hole it has dug into.

So basically, there’s really no reason to read this issue. Its whole purpose is to mercifully end the nigh disaster of a story it has been spinning for months now. Chances are that no one will be looking to follow up on any of it. I have no doubt that Fury of Firestorm: the Nuclear Men falls in the same company as Static Shock, Grifter, Voodoo, Savage Hawkman and all of the other titles that have suffered behind the scenes between creators and editorial. Eventually, we’ll probably get some interesting interviews or tweets about what happened here. We know the basics already. Another series that had some momentum thanks to Brightest Day got ran into the ground within a year.