Futurama is good at using their extended cast in ways that not only make you laugh, but also develop their characters. Much like Matt Groening’s other show (you know which one I’m talking about), the periphery characters are all interesting and add something to the show. Lrrr, the ruler of Omicron Persei 8, has a unique place in the shows structure. Most of the time he is trying to conquer Earth for a variety of reasons. However, on some situations, he becomes part of the main characters group and takes on a more “frienamy” role. This episode made Lrrr a relatable guy and for a giant reptilian dictator, that is a pretty impressive feat.

The episode starts with Fry writing a comic book about Super Delivery Boy saving Leela from an evil alien. This would become the main side story in the episode and ultimately forehadows the ending. Fry is having problems making the character believable and the rest of the group doesn’t think too highly of his creation. In order to help him they go to Comic-Con 3010. This is by far the best part of the episode. If anyone has ever been to Comic-Con you know that it is almost as crazy as it is depicted here. There are many nods to the fans of the show and they go over well. The cast ends up sitting in on a panel for ‘Matt Groening’s other show’, an obvious allusion to Futurama. Inside they find the writers talking about their new show Futurella and it is quickly cancelled by FOX. FOX does have a pretty notorious stigma of not giving shows a chance and this was the writers way of showing it; it is a pretty funny joke. I know I may be spending a lot of time talking about the Comic-Con portion of the show, but it made me think about just how resilient Futurama is. It was cancelled, revived on Adult Swim, revived on the DVD movies, sold to Comedy Central, and then brought back. It has been quite a road and the writers are thanking the fans with nods and gags like this. 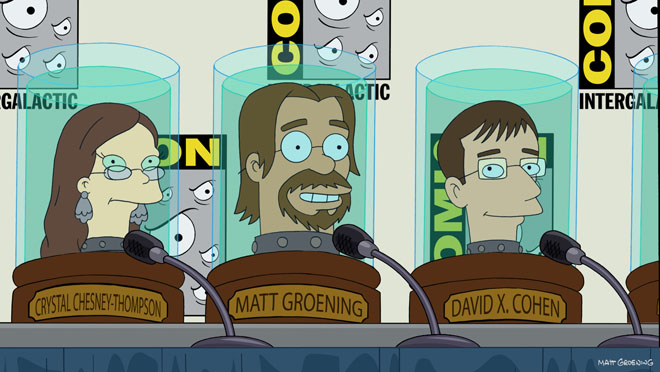 The remainder of the episode focuses on Lrrr, as his wife Ndnd kicks him out of their castle and the planet, because he is too lazy and has not conquered another planet in a long time. This causes Lrrr to ask the group if he can crash on their couch and sends him into a midlife crisis. Bender is there to egg him on and the two go out on the town to find him a new girl. There, he meets another of his kind and it is rather humorous.

Leela steps in and tells Lrrr that he has to go back and patch things up with his wife. She then fills the nagging role that Ndnd had on his home planet. After some fake planetary conquering, the two reconcile their argument, but Ndnd does not like the fact that Leela has become the one who nags Lrrr. The scene where they first come face to face is pretty funny, with Bender providing frying pans to all who want them, for a price of course. In the end a decision needs to be made and the foreshadowing I mentioned earlier comes into play. While there is a nice deus ex machina to solve the problem, it calls back to an earlier joke and I did not feel slighted in the least. However, I would have been shocked if they had maintained the event, as next week is the shows season finale and also its 100th episode.

It is a strong episode of a very strong show and while not a classic; also not forgettable. Lrrr is cool and I cant wait till we get to see him again and in what capacity.