We have seen some weird pairs since Futurama came back and this week is by far the weirdest. The story focuses on Amy and Nibbler trying to stop a race of intelligent cats from stealing the gravitational pull of the Earth, so they can use it on their planet to save it from oblivion….yep you know typical things. It may be one of the more outlandish plots to an episode of Futurama, but it is definitely funny.

Similarities between That Darn Katz!, and the season three episode The Day the Earth Stood Stupid, are hard to miss. You may have some apprehensions about Amy, one of the least developed characters, teaming up with Nibbler, a character with a deep back-story and high overall significance to the show, but your fears would be unwarranted. In this episode the writers show that any of the characters are robust enough to support themselves on their own and the typical team-ups are not their only pairing.

So we find out that before coming to Earth cats had their own planet full of cat scratching posts and fluffy mice on strings. There was a problem on their planet and in order to fix it they need to harness the power of our planet. They have a very convoluted and humorous plan to go along with it but I won’t spoil it. 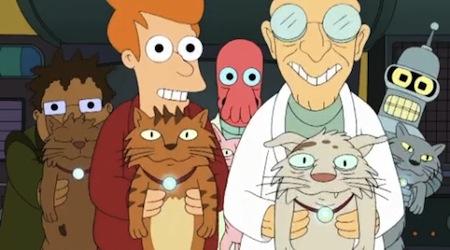 We also find out that Amy was training underneath the professor in preparation for her doctorate thesis. This may have been mentioned in the past but it has been so long that even they don’t really remember what Amy was interning for. This is the only real problem i have with the episode. In the past Amy was always shown as somewhat of an airhead. She never came off as intelligent and i believe the professor said that he keeps her around because they are the same blood type. These are small, very nerdy, gripes and while they have no real effect on the episode, it does seem a little out of character. The titular Dr. Katz is funny along with his judging table. We even get to see Bubblegum Tate again. I love the way these new episodes embrace the inside jokes and characters of the older ones. Futurama, if nothing else, knows its audience and treats them with respect.

Nibbler took more prominent role in this episode and his mere involvement raises the stakes. In the past Nibbler only involved himself when literally the universe was in danger. The Nibloneons are the oldest race in the universe and when this becomes part of the story, you know that the situation is dire. It is funny how the rest of the crew accepts the fact that he can talk now because he forgot to wipe their memories in the movie, Benders Big Score. Even thought they understand who he really is, the episode shows that they like to ignore it and treat him as Leela’s pet. I hope that Nibbler does not become a regular because the episodes involving him are usually the most epic. The Amy, Nibbler relationship is interesting and works for the most part. They seem to be the only ones immune to the mind control of the cats, another homage to Day the Earth Stood Stupid. Together they must prove that cats are not what they seem and help save the world…..again.

The episode, while not a classic, is entertaining and there is just something so humorous and cute about kitties trying to destroy the world. I especially love the cat back-story, it blends outlandish science fiction, with real world facts in the way that only Futurama can. This episode could also be the catalyst for many changes in the show. Amy is done with her internship, Nibbler wants to be a member of the team, and the cat problem. Most likely though, it will just stay an entertaining episode and forgo all the meta nuances. I may be the only one, but I am calling for some more Zoidberg.