By: Justin Moody | TV Reviews | July 18, 2010
Futurama has been back now for about a month and I for one couldn’t be happier. There was some fear that after being gone for so long, that the show would have a hard time getting acclimated to a weekly format. I’m pleased to say that those fears can now disappear. Futurama is probably the smartest animated comedy and when they are on a roll, the episodes are some of the bet you can watch, and even when they are not, the show is still top tier. This weeks episode, The Duh-Vinci Code, while not amazing, was a funny instalment that focused on simply making us laugh.

It’s a rare Fry and Farnsworth episode that helps to highlight one of the least developed relationships on the show. We seem to forget that of all our characters, these two share the closest bond. Farnsworth is angry at Fry for being such an idiot. On the idiocracy scale, Fry is in fine form. Almost everything he says is either grammatically wrong, out of context, or just play stupid. This is not a bad thing mind you, as this is why we love Fry. He has given us some of the best one-liners in the show and can repeat them on demand. Early on, we see that not only is the episode focused on Fry and Farnsworth, but for a the majority of the time they are the only characters we see. This could have been a bad thing, but they are able to carry the episode and in the end their relationship is stronger because of it. 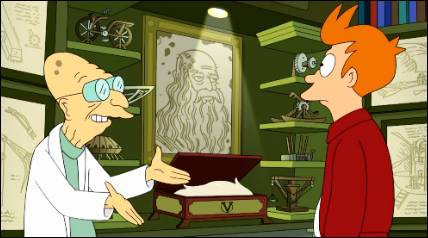 The plot revolves around the Planet Express crew finding Leonardo De Vinci's secret documents and from there it evolves into a satire of the Da Vinci code. Not the timeliest story for a show that so far this season has dealt with the iphone, the FCC, and gay marriage. It works because sometimes a lighter hearted episode without any symbolic message is exactly what we need. They have focused on social commentary throughout the season and it was about time they just took a step back and made us laugh. The Da Vinci code is mainstream enough that they run no risk of alienating people and the issue of Jesus is never mentioned. In fact, the turn the Da Vinci story takes is way out of left field but so funny and rather ingenious that the Da Vinci code seizes to mean anything. There is a funny couple of gags, that I won’t ruin, dealing with both the popularity of the novel as an ‘ancient document’ and the outlandish inductive reasoning of the book. There is some serious [what South Park call] Jeff Goldbloom logic, but it is used for comedic effect.

So the episode may not be in the top echelon of Futurama, but it is still very funny. It just goes to show that even when they have a routine episode it's extremely hard to go wrong.