Futurama – The Mutants are Revolting

It took eleven years, three networks, millions of letters from fans, more millions in DVD sales, four movies, and ninety-nine other episodes, but Futurama has finally hit number 100. It has been a long and unpredictable road, so before I get into the review, we should take a moment to appreciate what we have been through……ok with that out of the way, The Mutants are is a solid episode. While one can’t help but feel a bit let down, this is just because we had unfair expectations for the centennial episode.

The episode starts with the professor's proclamation over a giant speaker, that they crew is about to deliver their 100th package. Hermes makes a good joke about it being about 10 a year. The crew takes a dessert from Elzar, to a rich snooty women on an asteroid and they are invited to a fancy diner party. From there, Fry pulls a fry and lets it slip that Leela is a mutant. We found this out in the episode Leela’s Homeworld, one of the best episodes of the show and they only have really played it up since on a few occasions. 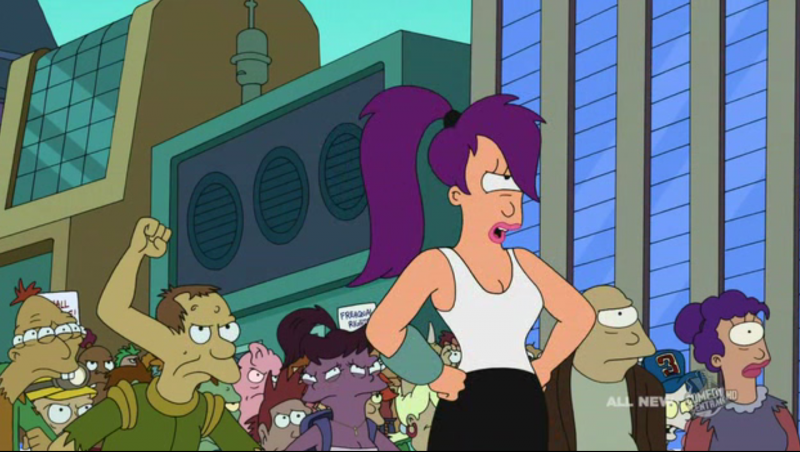 Leela finds herself banished to the underworld, but the rest of the crew, sans Bender, find themselves down there soon after. In the sewer they decide that mutants need equal rights and that they are going to fight the powers on the surface. Littered throughout the story are a few gems. The biggest laugh I had in the entire episode was when Zoidberg floated down to the underworld after everyone had fallen. The Titanic 2 land boat gag was funny and it eventually serves a purpose.

Meanwhile Bender is throwing a big party in celebration of the Planet Express crews milestone. The party is a love letter to the fans full of almost every character in the Futurama pantheon and there is one scene in particular that you will want to pause to look for hidden cameos. Hedonism bot, Bubblegum Tate, The Robot Devil, the Chicken Lawyer, are just a few characters that make an appearance and it is a great moment.

Fry’s mutation is pretty disgusting and I love Leela’s response. Fry just cannot seem to catch a break. The Fry/Leela relationship is no closer to being defined and if anything. this episode made it more convoluted. It is cool however, to see a bunch of the mutant characters like the foot guy and fish girl. While the story may be nothing ground breaking. it may have been the only way to get all the characters they wanted in the episode. The crew is in top form, especially the Hermes and Fry interactions. While the majority of the conflict is from the outside, the crew does share some interesting and funny moments.

The Mutants are Revolting is a funny episode of a much beloved show. While it may not have had the emotional punch that I was hoping for, they came out and gave a good episode. Never has a show endured as much as Futurama, to get to the episode 100 milestone and I just hope the road to the next is not so rocky. Well done Futurama, well done. 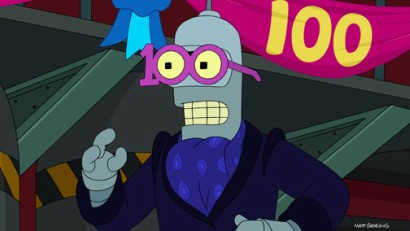