Futurama – The Prisoner of Benda

This week’s episode was one of the rare episodes that put the science portion of the show at the forefront and wraps an interesting narrative around it. The Prisoner of Benda has many similarities to the classic Futurama episode, The Farnsworth Paradox. While the former is not quite as good as the latter, the episode succeeds on its own merits.

The episode focuses on a new machine Farnsworth and Amy make, that allows two people to switch bodies. Right out the gate, it is rather comical to hear Amy’s voice coming out of the professors body. The only problem with the machine is that the two people who switch cannot switch back with each other. Some of the best parts of the episode are seeing where all our characters end up and in whose body. Needless to say, the writers are able to dissect their characters from the inside out and it is a testament to the strength of each character that we are able to pass through their appearance and see who inhabits their body. Their motives are the same regardless of whose skin they are wearing. For example, the Zoidberg and Professor skins do some very strange things that some, myself included, will cringe at. When we think about who they really are however, it represents something in the show we have never seen before and to Fry would be the culmination of years of never giving up. While this may sound vague when reviewing the episode, I think you will know what I mean. 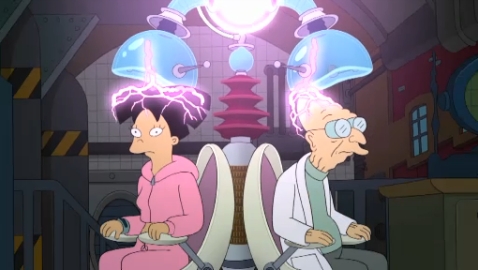 The main thrust of the story is on Benders quest to steal a robot princess' jewel encrusted crown. He takes Amy’s body to do so, but events quickly spiral out of control and bodies are switched around causing confusion, both for the characters and the audience. By the time everyone has switched, they are presented with a problem, how are they all going to get back. This quandary is a representation of a branch of Algebra called Group Theory, the most famous example of which, being a method of solving the rubix cube. The writers once again show that above all, they are intelligent people capable of showing complex scientific issues in an inviting setting, all the while never explicitly stating the issue. The most important part though, is the fact that they use said complicated issues as fuel for the storylines. Where The Farnsworth Paradox dealt with alternate universes, this episode deals with mathematical theory. Just another reason why Futurama is an amazing show and this is a great episode.

At one point in the episode, Benders body, inhabited by the Professor, runs away to the robot circus and meets all the normal circus stereotypes in robot form. It is there that he meets Bertha the cannon robot, who relays the message of the episode. She has the chance to change her old and beaten down body for a new one, but she refuses, saying that she is who she is and to change would be a lie. Leave it to Futurama to teach us a lesson from a giant fembot cannon.

The only part of the episode I found lacking, was the majority of the Fry and Leela relationship problems. I have stated before that I am confused about the whole thing and they seem to keep flip flopping on the issue too. Their problem drags on a little too long, but there is good payoff. While the episode is not as good as The Farnsworth Paradox, it is another strong episode in strong season.