By: | Comic News | February 27, 2011
After lengthy development, FX has handed a pilot order to Powers, a drama based on the graphic novel by Brian Michael Bendis and Michael Avon Oeming. The project, written by Charles H. Eglee and to be directed by Michael Dinner, is a police procedural set in a world where superpowers are relatively common and centers on two detectives, Christian Walker and Deena Pilgrim, in a Homicide department that deals with cases involving "powers" (people with superpowers). Powers, from Sony Pictures TV and FX Prods., is slated to begin casting immediately for a spring shoot.

Dinner, who is under an overall deal at Sony, has been the driving force between the project. Eglee came on board to write a new script late last year, after a stint as an executive producer on a very successful  cable series adaptation of another graphic novel, AMC's The Walking Dead. (Journeyman creator Kevin Falls was previously tapped to write the script.)  In another Walking Dead connection, the company behind the AMC hit, Circle of Confusion, is attached to executive produce Powers alongside Dinner and Eglee. 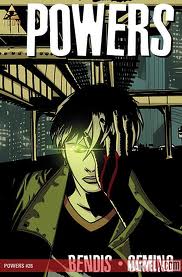 Both Dinner and Eglee have history on FX. Dinner directed the pilot for Justified and serves as an executive producer on the FX series, also produced by Sony. Additionally, he co-directed with Allen Coulter the pilot for FX's flagship series Sons of Anarchy. Most recently, he helmed the network's pilot Outlaw Country, which remains in contention. Eglee was an executive producer on FX's first signature series, cop drama The Shield.

The pickup for Powers comes on the heels of FX's pilot order to Ryan Murphy and Brad Falchuk's American Horror Story.

After the hit that is The Walking Dead, the scramble to find the "little Image book that could is on in Hollywood". I for one could never really get into this book but I know there are a lot of people who enjoy it. Also take into account the people that are going to make the show and Powers could be a huge hit FX.