"Video Games Get Awards and We Get New Trailers "
By: Zack Zwiezen | PC News - PS Vita News - PS3 News - PS4 News - Tech News - Wii-U News - Xbox 360 News - Xbox One News | December 6, 2014
Geoff Keighley's revamped gaming focused award show aired last night. The Game Awards 2014. The show seems to be a successor to the VGA shows from the last few years, the ones that aired on Spike TV. Similarly to last year's VGA, which was rebranded VGX, The Game Awards were an online only affair. No TV channel carried the nearly 3 hour show and it did feel a bit cheaper and less polished than the VGAs before it. But, there were game reveals and announcements. So, let's talk about those.


One of the best moments of the show was a segment dedicated to Sierra and their founders Ken & Roberta Williams. These two helped pioneer adventure games and advanced gaming in a huge way. They were awarded the "Industry Icon" award and Roberta helped introduce the new King's Quest, which will be released on PC, PS4 and Xbox One next fall.

The Legend of Zelda on Wii U


Nintendo got a lot of people excited when they finally showed off gameplay from the upcoming Zelda on Wii U. The video, which was sadly not a direct feed of the gameplay, was filled with a ton of neat bits. One of my favorite was the way the Epona, the horse, would naturally avoid tress and other obstacles. They also showed off a massive map, the ability to slow down time after jumping off Epona and even teased a bit about Star Fox, which will becoming out before Zelda on Wii U. Both games were confirmed to be coming out next year.

Adrift Gameplay Reveal
Adam Orth of Three One Zero showed off his new game, Adrift. Set in space, you control an astronaut exploring space. He called the game an FPX, a first person experience, and showed off some gameplay. The game looks fantastic and is running on Unreal Engine 4. It will be released next year on PS4, Xbox One and PC. It will also support the Oculus Rift. You can read more about Adrift and the creation of the game in this Polygon piece.

New Tile Sets in Mario Maker
Nintendo brought some new gameplay of next year's Wii U game Mario Maker. The new gameplay showed off Mario World and Mario 3 tile sets. The game will allow players to make their own Mario levels and hopefully share them with others. Originally announced at E3, this game looks like one of the coolest things Nintendo has done in a while. Hopefully they allow online sharing and original game physics. This could end up being one of the best games on the Wii U, if Nintendo can pull it off.

Gone Home Creators Announce New Game
Fullbright Studios, creators of last year's amazing Gone Home, have revealed their next game. Tacoma. Tacoma seems to be set in space, possibly on the moon. Not much is shown in the teaser, but I wouldn't expect this to be some fast paced action shooter. It sounds like and seems like it will be a more slower paced and story driven game, similar to Gone Home. I'm excited to see more of Tacoma and can't wait to play it.

New Bloodborne Gameplay
From Software and Sony showed a small video of some new gameplay from the upcoming RPG. Bloodborne is being made by the same studio, From Software, who made the loved Dark Souls series. This video seems to imply that this game will have a lot in common with those games, including the high difficulty those games are known for. Bloodborne looks great visually and the gameplay seems faster paced than in the Dark Souls games. Bloodborne comes out late March only for the PS4.

Until Dawn, New Gameplay Shown
Coming to PS4, Until Dawn seems to be a love letter to slasher and horror movies. The game will allow you to control multiple characters who are trying to survive a terrifying night. You decide who makes it out of the cabin alive and who dies. I want to see more of this game before I get too excited and the motion controls that popped up in the video have me a bit nervous, but will have to wait and see if Until Dawn is worth playing. Hopefully we get more info soon.


This is an award show, so some awards were given out. Here are a few winners, for a full list check out Kotaku who collected all the winners in an easy to read list.
Game of the Year: Dragon Age: Inquisition Best mobile game: Hearthstone Developer of the year: Nintendo Best shooter: Far Cry 4 Best narrative: Valiant Hearts Best Indie Game: Shovel Knight
One thing I really enjoyed about the show was the inclusion of smaller devs and teams. It felt like indies had a real presence at the show and it let to a large and varied list of games that were shown, awarded and revealed. This is a nice change of pace from the VGAs which seemed a bit too focused on bigger games only. 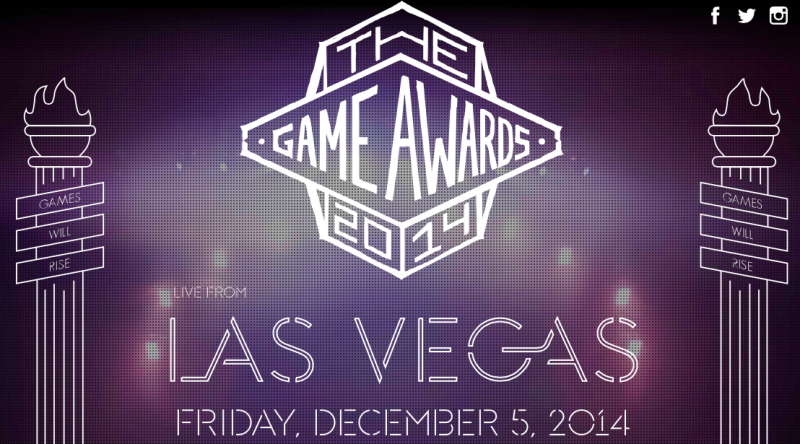 Final Thoughts On The Game Awards 2014


You can watch the full three hour event here, and see all the nominees and categories. Overall I felt that the award show was way too long. It felt like when they announced the half way point everyone on Twitter, including myself, reacting with shock. A three hour award show is pretty long. Some segments, like the trending gamer award, felt awkward and not very funny. On the plus side the Sierra segment was great. I also really liked Koji Kondo, who opened the show and closed the show by performing beloved Nintendo music.
But my biggest issue with show was the shoddy feel to the whole thing. Constant audio drops, broken teleprompters, weird pacing issues and a sense that the audience was tired or not even there. All of this lead to The Game Awards feeling less like a tribute to gaming and more like a series of trailers being played in front of a nearly empty room. Hopefully next year improves on the quality and shortens the run time.