Dark Wings, Dark Words takes a closer look at the plotlines and characters that weren’t featured in the premiere. We do get glimpses at Cersei and Tyrion, but this episode is centered on the Starks and Tyrells. The Starks being likable and the noble family to root for has been established since the very first episode, but the other families are much more of a mixed bag or sometimes just evil. However, this episode actually makes the Tyrells quite likable. For the most part, they seemed to side with the Lannisters simply due to opportunity, not due to love or loyalty for House Lannister, so they just tolerate each other.

While Margaery does seem power hungry, she also shows respect to Sansa and still some to Renly. It’s actually hard to get a read on her since she’s clearly playing Joffrey and expertly uses the “I’m just a pretty girl with no thoughts” card whenever it suits her. It’s a shame other characters like Little Finger never had her ambiguity, since he was clearly untrustworthy from the start. Seeing Joffrey being toyed with and possibly tamed is a nice treat too. The eldest Tyrell, Olenna, makes her first appearance and her scene was perhaps the best of the night. While almost everyone in King’s Landing is a snake, her honest and straightforwardness made her seem like a bull. Whether she’s talking about her own family or the rationale for the war, it all comes out brutally honest and sometimes hilarious.

Some of the other King’s Landing scenes were interesting as well. With Cersei no longer able to control Joffrey and him changing shirts in front of her, I thought she might resort to seduction. This is the same woman who’s been with her brother and cousin, so is being with her son that much worse? Excuse me as I vomit for a moment. Tyrion is easily one of my favorite characters, but his scene with Shae felt unneeded. The only other scene rivaling Olenna’s great rant was also a surprisingly honest speech from one of the older women on the show.

Catelyn pouring her heart out about her children and religion was very powerful. It also gave some great history on her love/hate relationship towards Jon, and that she blames herself for all of the Stark’s misfortunate since breaking her promise to the seven gods. I was somewhat indifferent to her character before this episode, since she’s such a shrewd person, but between that scene and realizing she’s lost her husband, father, and possibly (to her knowledge) three of her children, all recently, does create sympathy.

The transition to Jon from that scene was also a great touch. Out of all the main characters he seems the least developed; Robb is righteous, Cersei is evil, Tyrion is clever, Stannis is stern, Dany is determined, and so on for every other main character, but what exactly is Jon? He’s really only been the quiet unlucky boyscout so far, which really isn’t saying much. Luckily, the environment he’s in, beyond the wall, is interesting enough to carry the weight for him.

With Rayder naming all the different tribes in the area and the supernatural beings we’re being introduced to, it feels like this world is ever expanding. I’m glad they quickly identified Bran as a warg since it’s something they’ve been teasing back to season one. Bran and Arya have been interesting so far, but I’m wondering how long can that last. It seems like they’re more or less just wandering around and running into other characters, whether they be Tywin, the Hound, or new characters. I haven’t read the books so I don’t know, but I hope they get a clear objective and purpose soon, rather than walk around and just try to survive. I guess should say Rickon is doing it too, since he is in Bran’s plotline, but it’s hard to remember that there’s another Stark younger than Arya and that he exists…. at least he’s having fun chasing butterflies or whatever he did when he ran off.

Jamie and Brienne are also wandering around, but unlike the Stark children, this feels temporary and they clearly have a purpose. Also, their scenes are great because it shows off their personalities in this almost clashing buddy cop plotline, but with knights. As a fan of Lost, it’s hard to not get a Sawyer feeling from Jamie. Both men act as if they’re heartless and they want to be hated for their misdeeds, in some ways they even look alike. However, Sawyer proved he was a good guy under the façade, but the jury is still out on Jamie. He does have some good points already, like being the only Lannister that cares about Tyrion. I’m glad someone who’s in love and has children with his sister doesn’t have the hypocrisy to look down upon Renly nor Brienne for who they love. 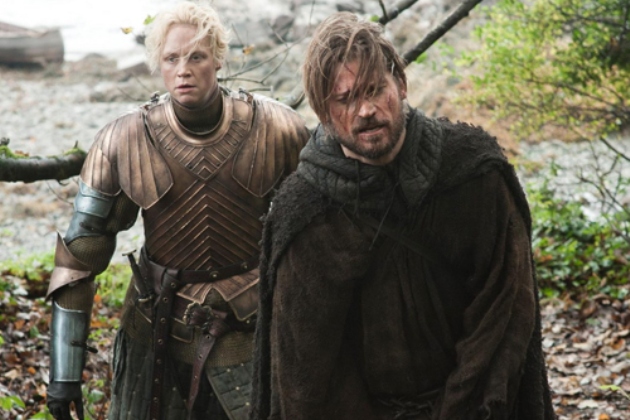 The fight scene between the two was fairly good. Even though Jamie finally has a weapon he learns that Brienne isn’t a pushover. Her casting was a really good move since it looks realistic that someone of her stature could fight men, which would be eye roll inducing if they had gone the typical Hollywood way… a 100 pound model looking blonde. It’s very believable that Brienne can take care of herself and beat a tired/hungry Jamie. As usual, the episode ends on a cliffhanger that almost makes me wish that HBO copied Netflix and released all their episodes at once, but sadly, we have to wait until next Sunday.