Game of Thrones – Fire and Blood

I think the season finale of Game of Thrones illustrated some of the differences between it and the books well. It was a good episode, and a lot of important stuff definitely happened, but it also felt a bit light after the huge events of the last couple weeks. There was a whole lot of reaction to Ned's death, and in general it felt like things were just decompressing a bit. In the book, Ned is killed with a lot more than 10% of the story left to go, and he felt less like the main character because he was only one of several to get his own viewpoint chapters. So while it was able to continue on at full speed after his head and body parted ways, the show definitely seemed to position him more as the central figure, and his absence could be felt just a bit. There's obviously plenty to entice viewers with next year, but with there only being one episode after his execution to wrap things up, there wasn't a real opportunity to actually show new things happening, and so instead there was just a bunch of pieces moving into place for new threads later on. Only Daenerys' story seemed to have major events going on, even if elsewhere there was plenty happening.

Joffrey has settled in as the new king after his first major act of violence, and Sansa finally sees him for the little monster he is. He has the tongue of a bard cut out, has a guard slap her for him, and forces to look at the displayed heads of her father and septa. Maester Pycelle tells Ros (that whore sure does get around) that he thinks Joff has the potential to be a great king, but the rest of his own family is wary of his rash decision making. Cersei has taken another relative into her bed, Jaime is quite aware how dangerous his position as captive of the family his son just killed the patriarch of is, and Tywin and Tyrion are both fully aware that any chance of a simple peace with the North and the other Baratheon brothers is gone now. Seeing Tywin finally acknowledge that his son has a decent mind and appoint him Hand in his place was a nice scene for Tyrion, and gives him an opportunity to have a lot of interesting stuff to do next year. The interactions between those two were a lot of fun to watch. 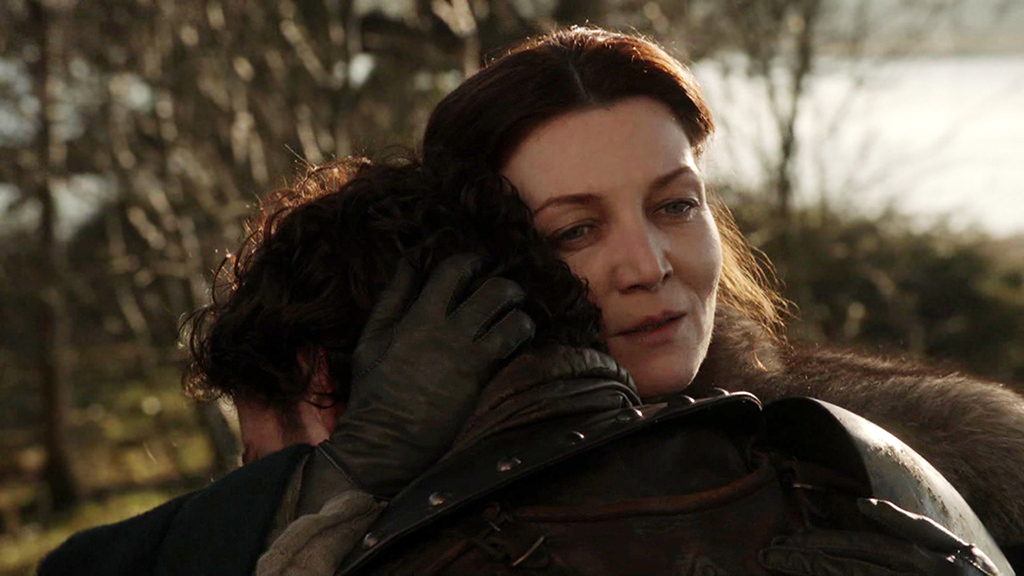 Meanwhile the Starks take the news pretty badly. Bran's recurring dream returns, and he tells of how the three-eyed crow led him to a place for his father in the crypt. Apparently Rickon had the same dream, and they both had it the night before the news arrives. Apparently the dreams were more than just symbolism. Jon and Robb don't know quite what to do with the knowledge of what happened, and Jon even tries to abandon his duties with the Watch before his friends stop him. Both are presented with heavy burdens in the wake of recent events - Robb's banner men declare him as the new lord of Winterfell the King in the North, with the expectation he'll cut ties with King's Landing entirely, and Jon and the rest of the Watch are set on a mission to go beyond the Wall and find out what's really behind all the reports of White Walkers and Wildlings gathering together at a fortress. This is unknown to their recruiter Yoren, who's still down south, and cuts off Arya's hair so she can pass as a boy and escape the captive fate her sister. They march off north with new recruits for the Watch, including the blacksmith bastard son of Robert from a few episodes ago.

And across the sea, we get the biggest moment of crisis yet for Daenerys. She wakes to learn that her son was born dead, a scaly abomination, the price paid for Drogo's life. What's worse, it's no life fit for a warrior, as he can do nothing but lie still and hold his eyes open. The sorceress she rescued from the rapists turns out to have not been too happy with what Dany did for her, seeing as how her temple was destroyed and her way of life wiped out. Dany regretfully smothers Drogo, ties the witch to the funeral pyre, places the dragon eggs by her husband, and walks into the fire herself once its lit. The next day she's still alive and unburnt, and the eggs have hatched into three infant dragons. The slaves and Dothraki who stayed behind all bow to her, and she's ready to do something for herself now. I thought this scene was very well done - it all builds very much like something significant and unforeseen is coming, and that's exactly what we got. The dragons are supposed to all be long dead, but now there's a young woman who has a whole litter of them. I liked the work on the dragons themselves - nice CGI work, and there's just the right amount of menace in their screeching as the episodes cuts to black.

So yeah, that's the first season. Several major characters died sooner than we might have expected them to, leaving behind younger and less experienced people to carry on their causes. King Robert is dead, and his false son is ruling in his stead, driving the country deeper into a conflict that could be worse than any from before. Eddard Stark is dead, and he has two sons trying to live up to his image, one with an army poised to bring a lot of trouble to the current rulers, one among too few men who are trying to protect everyone from a possibly worse threat they're all unaware of. Khal Drogo is dead, but his wife is still alive, eager to use her new authority (and dragons) to wreak havoc on the people who drove her family from their rightful throne. And we still haven't met a lot of people with big stakes in all this fighting, especially Stannis, who has the second best actual claim to the iron chair after Dany. It's a lot of table setting, and in general the whole first season seemed like a lot of tables being set without anyone really eating at them for a long time. We never really got a major battle, and ten episodes sort of seems like it wasn't enough. But the book was kind of like that too, and it's all going to pay off starting next year, when all of these plotlines should go in really exciting and unpredictable directions. If you haven't read the books you can if you want to see what happens next right away, but I saw enough this year that I think you could just watch the show and get everything important in the story.