Game of Thrones MMORPG Coming Up!

By: | Xbox 360 News | March 1, 2012
"When you play the game of thrones, you win or you die. There is no middle ground." One of the most highly critically acclaimed book series, turned TV series, turned board-game, turned RTS will now be taking a dip in the online massive multiplayer player pool. George R.R. Martin
s, A Song of Ice and Fire series will be transformed into a browser-based, free to play MMO designed by Bigpoint and called (aptly) Game of Thrones.

Bigpoint is most recognizable for their work on hundreds of different browser-based free games like Battlestar Galactica Online and the cult hit Drakensang Online. More information about the game will be released next week at GDC in San Fran but it's already being reported that Bigpoint has selected the Norwegian development studio Artplant as it's development partner and they will be using the same platform technology behind Battlestar Online game. 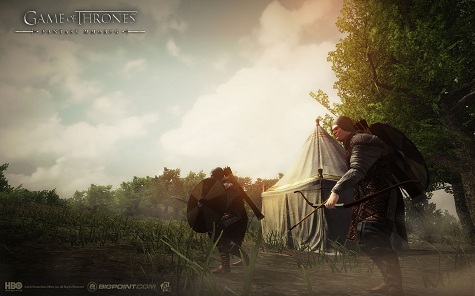 This recent addition to the Song of Ice and Fire cannon should NOT be confused with the single player RPG in development by Cyanide Games with the same name, both deal with the same universe but only one will let you assassinate evil king Joffery with your friends. Expect more information next week but if this very first screenshot  is any indication what to expect, I am more than happy to jump into an online Westeros!