“War. War never changes.”
Fallout 3 is one of my favorite games. I have played through Fallout 3 at least four times, two good runs, an evil run and a neutral run. But I've started and only got halfway countless times. For a time the Capital Wasteland was my second home. A place where I knew where everything was and who everyone was. I knew each metro tunnel like the back of my hand and knew where all the high level enemies spawned.
Recently I went back to the Capital Wasteland. Back to Fallout 3. And while my love of the game has not diminished, my memory of it has. Once I got past the initial few hours of the game I was in a world that I only sort of remembered. Sometimes I would see a large enemy or a map location or an item, and my mind would get a flash of memories from previous lives lived in the Wasteland. Seeing a toy car on a shelf reminded of my times shooting Deathclaws and watching them as they slowly limped after me, incapable of doing anything. Finding a Super Mutant walking around brought back the memories of the first encounters I had with the big, green brutes. And how scared I was.
At its heart Fallout 3 is an RPG. You create a character, pick some starting stats and skills. And over the course of the game you upgrade these skills while earning perks that augment your abilities. Fallout 3 even brings back the VATS mechanic from the older games, which were turn based isometric affairs.VATS allows the player to stop time and target different enemies, then once they have set up some actions they hit go and see the carnage play out. 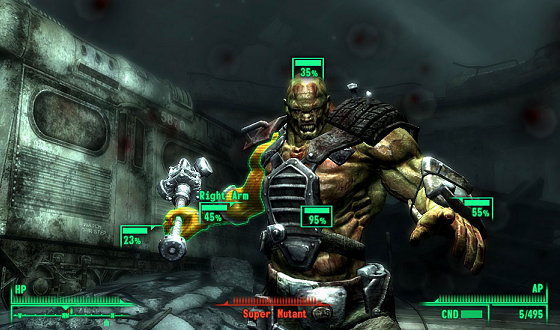 VATS in Fallout 3 makes it feel different. It lets you fight and explore at your own pace. It also allows those who may not feel comfortable playing a first person shooter to be able to fight in the Capital Wasteland. VATS will almost undoubtedly be in the much anticipated Fallout 4. And hopefully VATS isn’t change to dramatically.
But what really made me fall in love with Fallout 3 is the world. The Capital Wasteland is what happened to Washington DC after nuclear bombs fell during The Great War. A war between China and the US. In Fallout’s universe the 50’s is where culture was stopped, due to the bombs dropping and turning the world into a nuclear wasteland. But in the universe of Fallout the 50’s were more advanced. Robots and hovering cars were commonplace as were computers and advanced weaponry. Its this weird mash-up of 50’s era design and culture, the retro future feel of the 50’s and the nuclear apocalypse that gives Fallout a unique feel. Fallout is unlike any game series out there.
Nowhere is this mix of 50’s culture and nuclear hellscape made more apparent than Three Dog’s radio station. Three Dog is a cool, hip and sometimes loud DJ who plays music for the Capital Wasteland and shares news and information for those listening. But all the music he plays is 50’s era songs. So as you walk around a blood soaked trench, filled with radiation and super mutants, firing your plasma rifle, you can have “I Don’t Want to Set the World on Fire” playing in the background. The songs Three Dog plays are songs that got stuck in my head for weeks. Eventually I ended up getting the songs on my MP3 player at the time and to this day I listen to some of the music that I found in the Capital Wasteland. 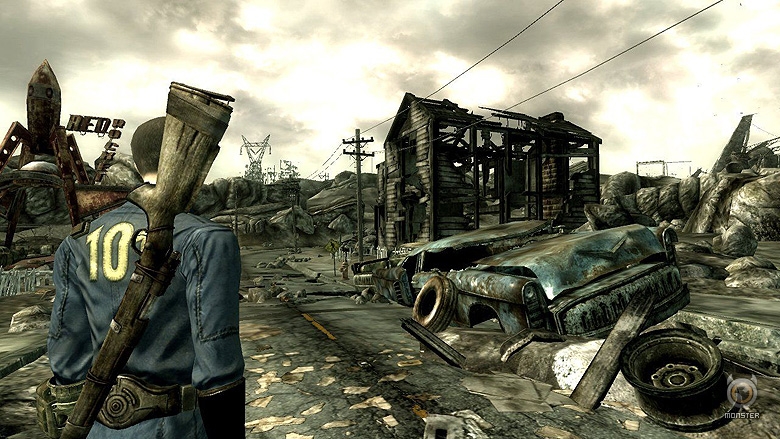 While you explore Fallout 3 you will discover all sorts of people, places and events. Many of which are not a part of the main quest, but still tell their own stories. Stories I love. Like the food factory that houses some Chinese spies, who don’t realize the war is long over. They also have been turned into ghouls, zombie like creatures, due to the immense radiation. Or sometimes you will stumble into a room filled with skeletons and a locked door, behind the locked door is a ghoul and some food in a box. These areas, where you are told a story through visuals and level design, I loved these areas. Finding a sniper rifle on top of a building and going down and finding dead super mutants with missing heads. These little stories help build the wasteland into a living world. 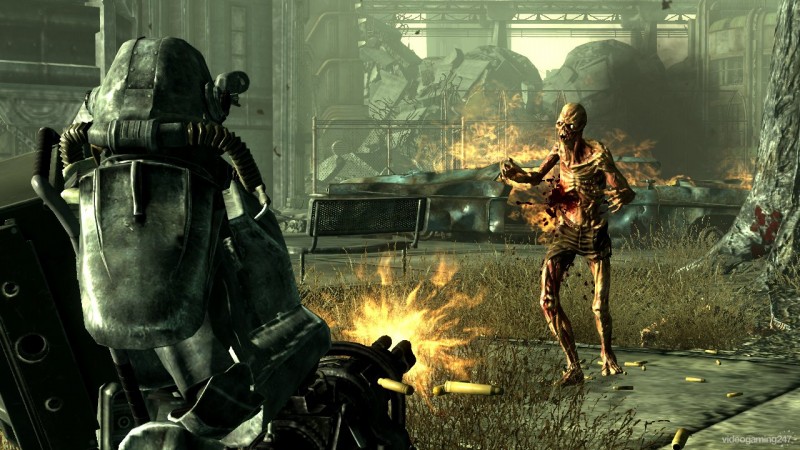 Helping this is the fact that characters actually have routines and needs. Meaning a bandit you let live won’t just disappear, but actually will find food if he needs it or stumble upon a monster and die. The world of Fallout 3 always feels like it is doing stuff when you are not around. These people and towns are going about their business as you drop in and sell some loot. When you come back a character might be dead, what happened to them, you might never know. I always like this aspect of Fallout.
But Fallout can also be a very lonely game. Long, vast stretches of empty wasteland. Abandoned homes or warehouses. Empty streets. Dead bodies of those who couldn't make it in the Capital Wasteland. Fallout 3, by yourself and with no radio can be a highly immersive and supremely lonely experience. Its desolate out in the wasteland and Fallout 3 makes you feel like you are all alone, fighting to survive in the hellish land of the Capital Wasteland. Find water, drink it. Steal some food from a campsite. Eat it. And hope you don’t run into something you can’t kill or outrun. Especially in the early hours of Fallout 3, you feel weak and fragile and on-top of that lonely. 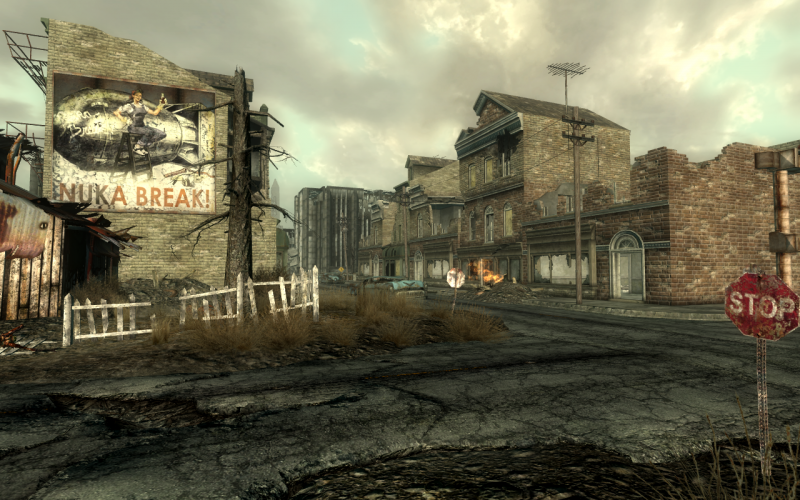 There is also a nice mix of dark humor and gore in Fallout 3. Like the character who is looking for a way to make mutated mole rat taste better. Or the “superhero” and “supervillain” who are fighting each other, and the town can’t stand either of them. Or one of my personal favorites, a small settlement called the Republic of Dave. Where Dave is the president. But if you want, you can mess with this settlement and maybe find a new president. Of course you could just kill everyone there, and anywhere else for that matter. Almost all of the characters in Fallout 3 can be killed. At nearly any time. Midway through a quest, but feel like you want to kill the dude giving you commands, odds are you can. And Fallout 3 is a gory and violent game, allowing you to blow people’s heads and limbs off and other nasty ways to end their lives.
That's the real beauty of Fallout 3. You have so many choices and options. The world is your oyster. And sure that world might be filled with mutants and radiation and bandits, but its still open and waiting for you to do whatever you feel like doing. You can kill everyone or save them all. You can explore or destroy. Its up to you, and that's why I love Fallout 3. War may never change, but you can sure as hell change the Capital Wasteland.