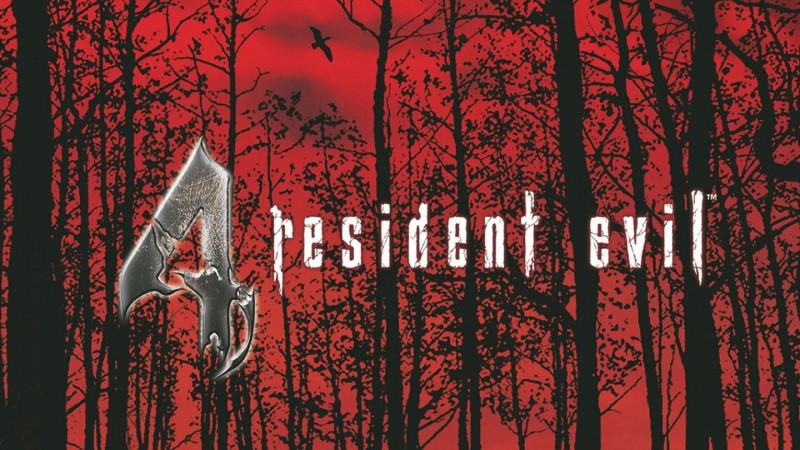 Resident Evil 4 is one of the best games I’ve ever played. It got me interested in Resident Evil again, changed the way third person shooters operate and was the perfect evolution of the franchise.
Before Resident Evil 4 came out, I had drifted away from the series. Honestly, I had lost interest in survival horror as a genre. They all played the same and felt the same. From Silent Hill to Dino Crisis, they all used fixed cameras and had combat that felt limp and barely usable. So initially I wasn’t excited when word of a new Resident Evil happened. When I found out that 4 was ONLY coming to the GameCube, a console I didn’t have at the time, I lost all interest and didn’t pay much attention. Well, that was until reviews started coming out.
Set in a creepy and rural area of Europe, the game tasks you with finding the President’s daughter. Your search leads you to a small village and only moments after you arrive it turns out that the village is infested with a parasite and some crazy people interested the parasite and of course the President’s daughter is here. The story isn’t amazing, but like most Resident Evil games it at least is fun to experience and filled with corny dialogue and weird characters. While the story wasn’t amazing, the gameplay was. 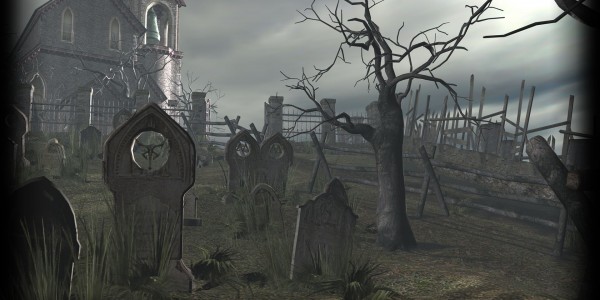 Reading about how the game controlled, the boss fights, the inventory system and atmosphere all got me really excited and supremely disappointed about Resident Evil 4. Excited, to play it. Disappointed because I didn’t have a GameCube. So I waited. And waited….and waited. Until finally, they announced the PS2 version of the game. I bought that game the week it came out and played through it at least four times within a year. I adored that game. Since then I have played it on Xbox 360, Android, PC and Wii - and I still love it.
The first thing I noticed and most striking thing about Resident Evil 4 was the “over the shoulder” camera it used. RE4 was one of the first games to use this camera angle. Since its release many games have employed similar views, including Gears of War. Cliff Bleszinski has said that one of the initial “seeds” for Gears of War was seeing Resident Evil 4. 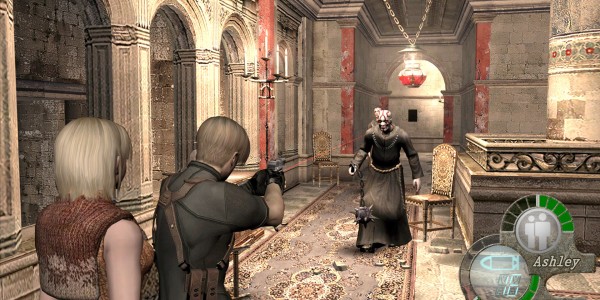 With this new camera angle came a huge improvement in combat. Past Resident Evil games never had hugely engaging combat. It worked, for the most part and that was it. Resident Evil 4 brought the series forward and introduced a combat system that felt good and was fun to use. Shooting large groups of enemies in Resident Evil 4 was satisfying. Picking off enemies, shooting knees to slow them down, running up and kicking enemies or shooting thrown axes out of the air, all of it felt great.
The first real fight in Resident Evil 4 shows off the improved controls and combat. You enter a small village, with homes and a church and even a barn. All of these are enter-able and you run around climbing ladders, shoving furniture in-front of doors, jumping off roofs and more. You do all of this so you can live, as the village is filled with angry people who want to kill you. One guy with a chainsaw is especially dangerous and hearing that chainsaw rev up is terrifying. As an intro to the game, this is nearly perfect. You will probably use most of your ammo and take a good amount of damage too. It is essentially the game going "Are you ready to fight for your life?" and that first time I played, I wasn't sure I'd be able to. 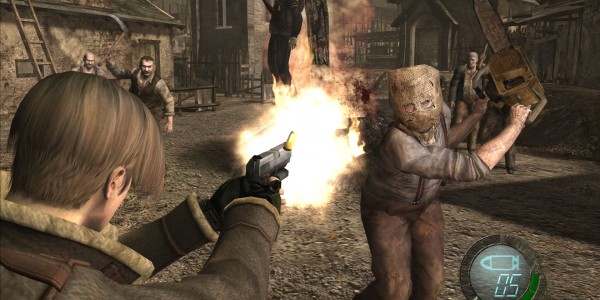 For hardcore fans who were worried Resident Evil was becoming too “action” heavy, well they were right. But that didn't happen until arguably 5, but definitely 6. RE4 though was filled with combat and shooting, but it didn’t ignore the past games. You played as Leon, from Resident Evil 2. You interacted with Ada Wong, also from RE2. You solved puzzles, collected ammo and different colored herbs. Save rooms returned, with their peaceful music back as well. No regenerative health. You were not able to shoot and move at the same time. And if you made one mistake and you could easily be killed. Usually in a gruesome manner, like having your head cut off by a chainsaw. So it had many elements of the old games, but they were in a more modern and frankly, better playing game.
Another returning feature from the older games was managing your inventory. Which RE4 not only brought back, but improved upon greatly.
Attache Case. Pronounced “At-tash-say” and not “A-ta-chee” like my idiot self did when I first played the game, the attache case is one of the best features in Resident Evil 4.
It is essentially a grid, which you place your weapons, ammo and items into. Each object has a different shape and size so you have to essentially pack your case correctly and efficiently. This might sound tedious, but it is more optional than required. You could easily just throw all your stuff in there in a non-organized fashion, not concerned about sorting or anything. YOU COULD DO THAT. But that would be the opposite of how I played RE4. Open up one of my saves and you will find highly organized and even color coded and sorted attache cases. I had a system and would sometimes spend ten minutes or more cleaning it up and making sure everything was organized. It is not the most exciting thing in RE4, but to this day I hope more games and future RE games use the attache case. (Also attache is just a fun word to say.) 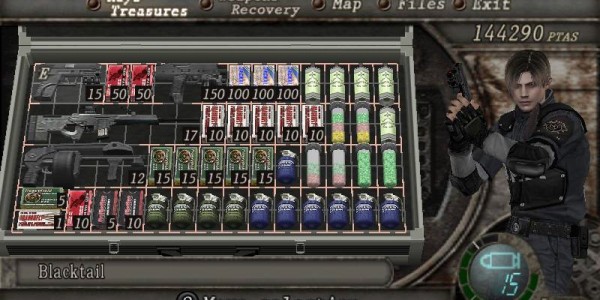 One more thing we need to talk about when it comes to Resident Evil 4, is the amazing encounter with a large underwater lake monster. At one point in the game you need to cross a large lake. You get into a small wooden boat and begin to journey across the lake. As you do this, you are attacked by a large lake monster who has one goal. Eat you. You use harpoons in the boat to fight off the monster. All the while your anchor is lodged in its back meaning, you get dragged around the lake and have to try and toss large harpoons into the back of this large creature.
The whole fight feels like a struggle, you barely feel like you're doing anything. You feel like a fly, the creature swats you around and ignores your spears sometimes. When you're knocked into the water you have to frantically mash buttons to swim your way back to the relative safety of the boat. The first time this happened I was stunned. This fight is one of my favorite sequences in a video game. 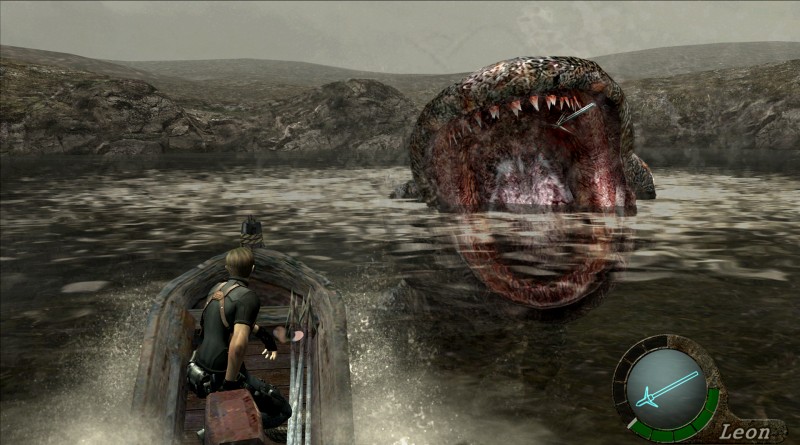 With it’s excellent combat, amazingly addicting inventory and nods to the previous Resident Evil games, Resident Evil 4 was a blast to play. Even going back and playing through it again, which I did recently, I still had a ton of fun. It just feels good to play that game. It's almost hard to describe it. Walking around creepy, mist covered graveyards and seeing an enemy turn around and yell at you, setting off action music, still gets my blood pumping.
Resident Evil 4 is a phenomenal game. I would even say, it is one of the best games ever made. As Halloween approaches you might be looking for a creepy/scary game. Resident Evil 4 isn’t filled with jump scares either. Instead it uses atmosphere, a lack of resources and a lack of knowledge, along with strange characters to create a haunting world. If you are looking for something horror-related to play during Halloween, Resident Evil 4 is worth checking out.