Be fearful gamers!  The Rapture is upon us!  According to a radio evangelist, on May 21st the righteous will ascend to heaven, while sinners are sent to roast in eternal hellfire!  Having spent most of our lives playing murder simulators, and teabaging virtual corpses in shooter games, we’re all going to fry!  But our salvation is at hand, because I’ve found a list of games we can all play to earn some good karma and maybe buy our way into heaven.  Read on as though your soul depends upon it!

1:  Left Behind: Eternal Forces- Yes, this crappy series of books about The Rapture was adapted into other media, including some laughably terrible movies staring Kirk Cameron.  Among the franchise cash-ins was a series of bad strategy games that challenged you to convert heathens, thus granting them access to Heaven.  Or you could just kill the infidels and send them straight to Hell where they belong.  However I’m sure that the game’s campaign will give you the information you need to weasel your way into paradise if you pay close attention to the tutorials.  Best of all, you can download it from the developers website in time to redeem yourself before Jesus comes to gather the righteous.


2: Mass Effect 2-  Okay, let’s be honest about the inspiration for this story.  Commander Shepard is Jesus.  He dies, then is reborn to save humanity.  Also… Shepard, Shepherd.  Get it?

Now that we all understand that Mass Effect 2 isn’t really about robots, and blue space lesbians, we can try find out how we can exploit this story about the son of God to get into heaven.  Throughout the game, players are given moral choices that effect the story.  It’s a lot like a big ethics exam, and all you have to do pass is constantly ask “What would Jesus do”?  When our vengeful God comes to punish all of the evil doers, just hand him a flashdrive containing your Mass Effect game save file with a perfect “Paragon” alignment rating, and you’ve got a “Get out of Hell free” card.

Just a heads up; this game takes a loooong time to play through, so download it right now, and ignore all of the sidequests! 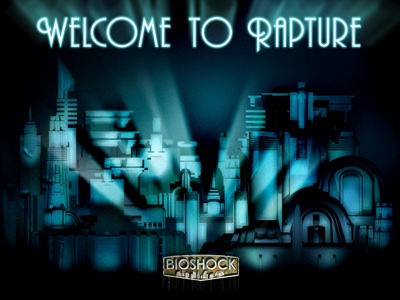 3: Bioshock-  Oh come on, how easy is this?  If I’ve learned anything from reading Sarah Palin’s books it’s that Jesus is a fiscal conservative.  The Bioshock games are heavily influenced by the works of Ayn Rand, whose philosophy inspired the Tea Party and many conservative Republicans like Sarah Palin.  But let’s face it, books have a lot of words, and you ain’t gonna read Atlus Shrugged before The Rapture hit.  But you do have time to play some games before the Heavenly Host arrives to kill the unworthy with their flaming swords.  If you want to get into Heaven when The Rapture comes, just get in line with some Tea Party activists, and spout off everything you learned from Bioshock about finance and government.  If you can memorize a few Andrew Ryan speeches, you’ll blend in perfectly with Sarah Palin’s followers as they file through the Pearly Gates.  It also won’t hurt if you buy the Bioshock 2 DLC pack called “Rapture Metro”.

If you’re reading this after The Rapture, then that probably means you played the wrong game at some point, and earned the wrath of God with some virtual sins.  Check out our list of Games That Will Get You Left Behind When The Rapture Comes to see what game you shouldn’t have played!