As the credits began to roll at the end of the first Gears of War, players knew immediately that Epic Games would develop a follow-up. As anticipated, Gears of War 2 was released two years later, in November of 2008. The first game provided Epic a foundation to build upon in the sequel, and Gears of War 2 certainly relies heavily on this framework.

While Epic expanded on some factors from the previous game, the core gameplay in Gears of War 2 is relatively untouched. Taking cover is still as vital in battle as it ever was, Active Reload has an ever-prominent presence, and the controls handle exactly the same as in the predecessor. Players expecting an entirely new experience here will be disappointed. If you didn’t like the first game, there’s nothing here in the sequel that will persuade you otherwise. 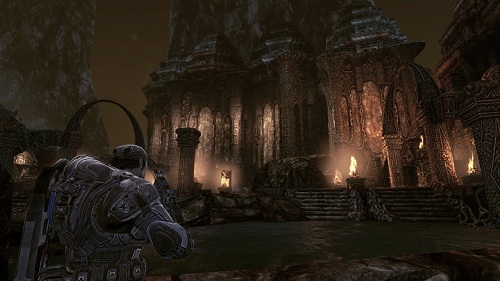 Instead, Gears of War 2 improves upon existing aspects from the first game. On the surface level, the already-stellar graphics from the predecessor have received some tweaking. The majority of Gears of War 2 takes place underground, as the desperate COG are fighting the battle on the Locust’s home turf. The underground sequences are visually outstanding, from the Locust architecture, to the flowing Imulsion streams. Compare this to the single underground level featured in the predecessor, with its relatively bland wall textures, and the improvements are very noticeable.

In terms of story, character development is also improved in Gears of War 2, primarily for your teammate Dom Santiago. Dom’s backstory is more fully fleshed out, after rarely being mentioned in the first game. His backstory also has importance over the main plot line, and for once you will find yourself forced to avoid the main mission and help out Dom. While Marcus Fenix’s character was developed in the first game, Gears of War 2’s treatment of Dom’s backstory trumps the character development from the predecessor handily.

Even your enemies, the Locust, are more fully developed, as you learn their motives and traverse their home environment. But, being that the game is the second in the trilogy, more questions are raised, rather than answered. Much like the first Gears of War, the ending provides a perfect segue into the next game.

On the subject of the ending, I should note that I was disappointed with the extremely easy final boss battle. I wasn’t sure I had actually beaten the game until the credits rolled. It almost seems like the antithesis to the last boss in the first game, which was very difficult even on the easiest difficulty setting. Also disappointing was the no-show of the Kryll and Berzerker enemies, as the appearance of those enemies in the predecessor added variety to the gameplay. 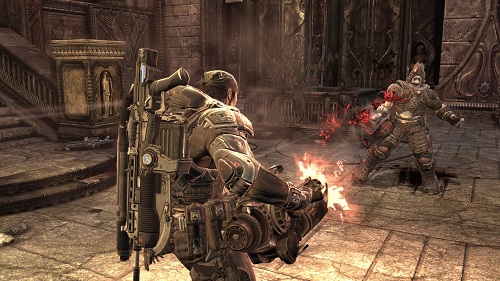 Gears of War 2 offers the player more firepower, due to an expanded arsenal of weapons. New to the series is the addition of heavy weapons, such as the Mulcher and Mortar. Wielding one of these weapons will slow your character down considerably, but make up for this disadvantage with sheer power. With larger enemies to battle, you will be thankful for these heavy weapons.

While the multiplayer in the original Gears of War left a lot to be desired, Gears of War 2 remedies this problem with the addition of the Horde mode. In this mode, you and up to four other players must hold out against increasingly multiplying waves of enemies. The difficulty of the enemies gradually increases with each wave, with up to fifty waves. This mode can be very intense, and it was much needed to improve multiplayer as a whole. 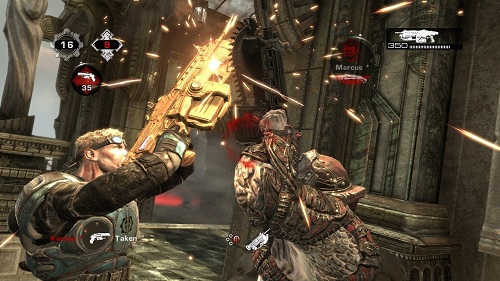 The multiplayer in the first game had a glaring problem that was the source of many frustrated players. If two opposing players happened to be running towards each other with chainsaws revved, the game randomly chose a winner of that duel. Gears of War 2 fixes this issue, as players who run into each other with chainsaws commence a “chainsaw duel,” where players frantically tap “B,” and whoever taps the fastest wins the duel. As in the first game, Gears of War 2 offers a co-op mode for the main campaign with one player controlling Marcus, while the other controling Dom.

Gears of War 2 successfully improves upon its predecessor through expansions of previously-existing aspects and minor gameplay tweaks. It is necessary to play the first Gears of War before beginning the sequel, as the story expects you to be familiar with the events from the first game. Also, there are many inside references to the first game scattered throughout the sequel, which really add to the overall experience, and it would be a shame to have those lost on first-time players.

Just as a reminder, Gears of War 3 launches on September 20th, and is sure to address the questions players had when playing Gears of War 2, while further improving the gameplay that Gears fans know and love.