With 4 novels and 2 award-winning games, the Gears of War universe has become quite expansive over the last 3 years.  Since Gears of War 3 is just around the corner, I’d like to take this opportunity to recap the story so far, both for those who never experienced what the series has to offer and those who have been away from the series since the end of the 2nd game.

*SPOLER ALERT* This article contains important plot information from both Gears of War games as well as the first 3 novels written by Karen Traviss based on the series.

The place to start in the Gears strata would be the Pendulum Wars, a 79-year series of conflicts between the Coalition of Ordered Governments (COG) and the Union of Independent Republics (Indies) over their planet’s main resource, imulsion, and of course, power.  The Pendulum Wars exhaust the planet of Sera of precious manpower that would have been instrumental in fighting the Locust horde, which emerged in every human city on the planet on what became known as Emergence Day or E-day for short.  A quarter of Sera’s population died in that unprecedented coordinated assault, and many Gears solemnly joke that they “were the lucky ones.”

Emergence Day was such a radical shift in the life of Sera that the entire planet’s calendar was altered afterward.  Dates were now referenced as a number A.E or “After Emergence".  While Sera’s human governments had fought amongst themselves for as long as everyone could remember; now they were forced to band together to fight a greater threat and the COG were the ones to spearhead the counterattack.

As humanity was fighting an ongoing battle that it could not win, drastic measures were taken to halt the advance of the relentless and merciless Locust.  The Hammer of Dawn, a strategic satellite weapons system stolen from the Indies by the COG at the famous battle of Aspho Fields, is what the Chairman of the COG, Richard Prescott, uses to both kill the Locust on the surface and deprive them of any COG technology or resources left behind in the chaos of the invasion.  As anyone who is familiar with the series knows, the Locust live underground, so the Hammer strikes fail to eliminate the Locust threat.  The Hammer Strikes also understandably anger those citizens who were not able to evacuate but survived the blasts, creating the so-called “Stranded,” former citizens of the COG who will never forgive their government for destroying their homes. 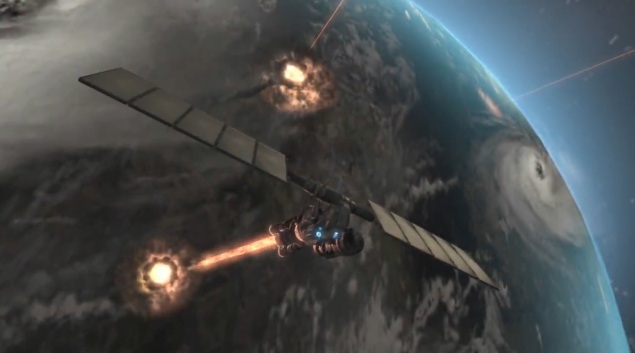 What the Hammer strikes do succeed in doing, however, is buying the COG time. Citizens of the COG that survived flee to the stronghold of Jacinto, a city situated atop a mound of solid granite that is too thick for the Locust to penetrate.  It is at Jacinto that the COG plans to survive and eventually defeat the Locust.

In their first real attempt to “hit those bastards where they live,” the COG deploys Delta Squad, including Marcus Fenix, Dominic Santiago, Damon Baird, and Augustus Cole to activate a “resonator” that will map out the Locust tunnel network.  Once the tunnels are mapped, the COG plans to detonate a Lightmass bomb that will incinerate any Locust remaining in the tunnels.  Unfortunately, Delta Squad is without Fenix to start, as he has been imprisoned by Colonel Hoffman, the head of the COG military, for abandoning his post in a vain attempt to rescue his father, scientist Adam Fenix.  However, the prison has been overwhelmed by Locust, and as the first game begins, Dom, Marcus’ best friend, rescues him from certain death after 4 years in the joint.  This doesn’t make Hoffman too pleased, as he left Marcus to die after pardoning every other criminal, but in a losing battle, he needs every man he can get.

With Delta Squad fully intact, Marcus and company descend into enemy territory to activate the resonator.  Unfortunately for them, the resonator fails to map all the tunnels, so they need to go to plan B.  There just happens to be a larger map of the tunnel network known as “The Hollow” at the Fenix estate…on Adam Fenix’s computer.

Having obtained the data on the Locust tunnel network, Delta Squad fights its way through heavy Locust resistance, with the struggle culminating in a battle on the train that carries the Lightmass bomb against General RAAM, one of the major Locust leaders.  Delta Squad succeeds in defeating RAAM and deploying the Lightmass bomb.  Colonel Hoffman gives an inspired speech about the COG’s victory against the Locust, but the Locust Queen leaves us all with a hefty degree of doubt that the bomb actually worked in the final cutscene of the first game.

Six months after the Lightmass bombing, all signs point to its failure.  The detonation of the bomb has vaporized an enormous amount of imulsion, leading to a deadly disease known as “Rustlung” that ravages the populace.  Cities that had once been obliterated have been repopulated after the supposed destruction of the Locust.  However, these reconstituted metropolises are being sunk one by one, suggesting that the Locust have not been defeated.  Even Jacinto, the once thought impregnable COG stronghold, is beginning to show signs that it’s not as rock-solid as people hoped.  In yet another act of desperation, Chairman Prescott announces an all-out attack on the Locust Hollow.

The remnants of the COG military march to the city of Landown, where grindlifts will carry thousands of Gears deep under the surface into the Hollow.  Once deployed, Delta Squad soon discovers that the Locust have been using a giant worm, known as the Riftworm, to sink the remaining human cities.  At this point, the COG now knows that the Locust plan to sink Jacinto using the Riftworm.  Digging deeper into the Locust stronghold, Delta Squad also discovers another gruesome truth, the Locust have begun to take prisoners.  One of those prisoners happens to be Baird, who is rescued after a short search, but this is about the only positive that comes from this grim realization.  Delta eventually encounters one of their fellow Gears, Tai Kaliso, being held prisoner by the Locust.  Upon being rescued, Marcus tosses Tai a shotgun to arm him, but after being relentlessly tortured, Tai commits suicide instead.  Moving forward, Delta is in the process of being evacuated from the Hollow when they encounter the all-encompassing jaws of the Riftworm.  The massive worm then proceeds to swallow Delta like a whale engulfing krill...

With this cliffhanger in place, read the second half of the Gears of War story retrospective.