This is the second part of our "The Story So Far" recap of the Gears of War universe.  Read the First half HERE.  *SPOLER ALERT* This article contains important plot information from both Gears of War games as well as the first 3 novels written by Karen Traviss based on the series.

Picking up where I left off in Part 1, we rejoin our Gears inside the Riftworm, where they are dazed and confused, but alive.  In the chaos of being swallowed whole, Carmine, the new 5th member of Delta Squad, is rabidly devoured by parasites, leaving Delta down a man.  As they always do, Delta again moves past their loss and ends up cutting their way through the worm, eventually severing the arteries feeding all 3 of its hearts and ending the threat to Jacinto.  After nearly drowning in the worm’s blood, Delta is assigned a mission to investigate a newly de-classified COG scientific outpost.  Despite their disbelief at being re-assigned immediately after having been swallowed and subsequently destroying a giant worm, Delta follows through with their orders and investigates the facility.

Upon reaching the facility, Delta is greeted by Niles, a semi-sentient artificial intelligence based on the personality of the former head of the facility that has been entrusted with the continuing security of the secrets within.  Delta bypasses the vault door intended to protect the research inside with an “extra-strength” explosive designed by Baird.  Delta then proceeds to disable Niles, which allows them access to data detailing a back-entrance into the Hollow, as well as releasing the experiments dubbed “Sires.”  Delta dispatches the Sires amidst a haze of mystery, escapes the facility, and begins their ascent of Mount Kadar, the location of the back entrance.

After finding the back entrance, Delta encounters some Stranded camping out in the Locust caves.  Dom questions one of them about his wife, Maria, who has been missing for years since the Locust invasion.  The Stranded man says he has seen her, and that she was with a group that the Locust took as prisoners to various work camps deeper in the Hollow.  Marcus (reluctantly) and Dom proceed to search for her.  Dom eventually finds the cage that she is being kept in, but what comes out of the cage isn’t the same as what went in.  Maria is a shell of her former self, unable to communicate after being tortured by the Locust.  Dom, in the most emotionally charged moment of the two games, euthanizes her.

Delta continues their descent into the Hollow and begins hearing the voice of the Locust Queen urging her soldiers onward.  Delta quickly discovers that the Locust are waging a separate war against the Lambent, their imulsion-filled counterparts.  Inside the Queen’s palace, the squad learns that Adam Fenix, Marcus’ father, had thought of the plan to sink Jacinto and flood the Locust tunnels long ago, but was unwilling to sacrifice the last bastion of civilization for humanity.  After reaching the Queen, Delta learns that the Locust also want to sink Jacinto not only to eradicate humanity, but the Lambent as well.  A battle with the Locust General Skorge commences as the Queen escapes.  The race to sink Jacinto before the Locust can evacuate their tunnels begins. 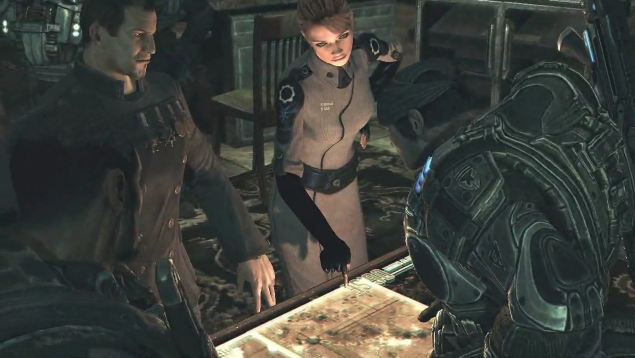 Delta, having escaped the Hollow on flying Locust known as Reavers, rendezvous with COG command only to learn that they need to descend into enemy territory again to detonate another Lightmass bomb that will finish off Jacinto.  During their descent, Marcus and Dom encounter a Brumak, a massive Locust tank, and hijack it from its driver.  The two Gears march the Brumak deep into the Hollow, obliterating everything in its path.  Predictably, the King Raven (helicopter) carrying the Lightmass bomb is hit by the wild Brumak, supposedly destroying Delta’s chance to detonate the bomb and sink Jacinto.  However, because the Brumak has been walking through imulsion the entire time, it morphs into a Lambent, which explode upon their death, leaving the Gears with their bomb.  Using the Hammer of Dawn, Marcus destroys the Brumak as the remaining citizens of the COG watch their last city sink into the abyss.  The Locust Queen reminds us of the legacy we’re leaving, and Adam Fenix mysteriously cries out for help indicating that he is still alive, thus ending the second game and leaving the rest of the story to the novels.

After the sinking of Jacinto, the COG moves its main base of operations to the derelict Port Farrall.  While the port sustains sporadic attacks by the Locust, it becomes clear that the flooding of the Hollow has dealt the monsters an all but fatal blow.  However, with the lack of resources and food at Port Farrall, Chairman Prescott begins to search for a new location for the COG refugees to settle.

Delta Squad is dispatched to the island of Vectes, a once thought abandoned COG outpost due to toxicity.  However, upon reaching the island, Delta soon discovers that Vectes is alive and well, with the COG occupants set to guard it before the Hammer strikes still in place.  These people have never even seen the Locust and were baffled when they lost contact with the rest of the world.  Prescott doesn’t hesitate to move to Vectes and begin to re-integrate his civilians with those from Pelruan, the ones left stranded by the Hammer strikes and Locust invasion.

With humanity seemingly re-united, Prescott announces that he will return COG citizenship to any surviving Stranded that wish it.  However, not all of the Stranded are enthused to rejoin the hated COG, and those led by John Massy begin raiding fishing outposts on Vectes in retaliation.  Delta Squad eventually captures Massy and agrees to trade him for a cease-fire, but a submarine controlled by Gorasnaya, one of the remaining Indie nations, blows up the deal, literally.  The captain of the submarine, Trescu, offers his navy and the location of a desperately needed imulsion platform in return for safety for the ragtag remnants of his nation.

All seems hunky-dory on Vectes except for a few raids by Stranded gangs.  However, when one of the Pelruan fishing boats is mysteriously sunk, Delta Squad is sent to investigate.  They are unable to determine what actually sunk the ship, but they suspect that it might be a Stranded submarine.  This proves to be incorrect, however, as on another fishing tour; one of the ships is sunk by an enormous swarm of Lambent creatures dubbed “polyps.”

Concerned about the possibility of an assault on Vectes by the Lambent, the remaining COG forces again prepare for war.  Radar picks up a Leviathan, a massive former Locust sea creature turned Lambent, just off the shore of Pelruan.  The Gears manage to kill it with a barrage from a King Raven into the monster’s head, but soon afterwards another Leviathan appears off the coast of the now under-protected naval base.  After barely holding off the enormous amounts of exploding polyps onto the beach, Baird manages to destroy the 2nd Leviathan with a devastating Hammer strike, destroying much of the base in the process.  Humanity has won yet another battle, but the assault by the Lambent only renews a harrowing realization that they’re not the only species left on Sera. 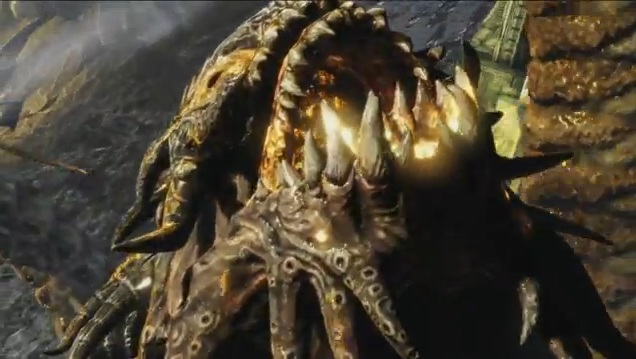 That about does it for the backstory surrounding the Gears of War series.  Gears of War 3 will be released on September 20th, rounding up the trilogy and (hopefully) the mysteries behind Adam Fenix’s relationship with the Locust, the source of the Lambent, and the Sires.