Geoff Johns has been working on the main Green Lantern title for seven years. He started his run with “Rebirth, and will be ending his run with “Wrath of the First Lantern”

After Johns announced that he was leaving the title he stated:

"I'm really proud of all the stuff we've built with Green Lantern – from Larfleeze to the different corps. The universe has expanded and will live well past my run. It was more than just telling another story, but really giving back to the character by expanding and adding to their mythology."

Johns said it made sense for him to end his run after “Wrath of the First Lantern”. He wants more time to concentrate on the Justice League.

What do you guys think about Geoff John’s decision? Are you said to see him leave the title? Who do you want to take over the title? Tell us in the comments below. 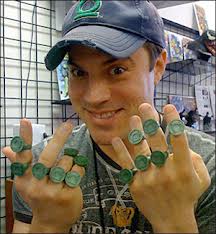